How Will Mitchell Robinson and Nerlens Noel Split Time at Center? 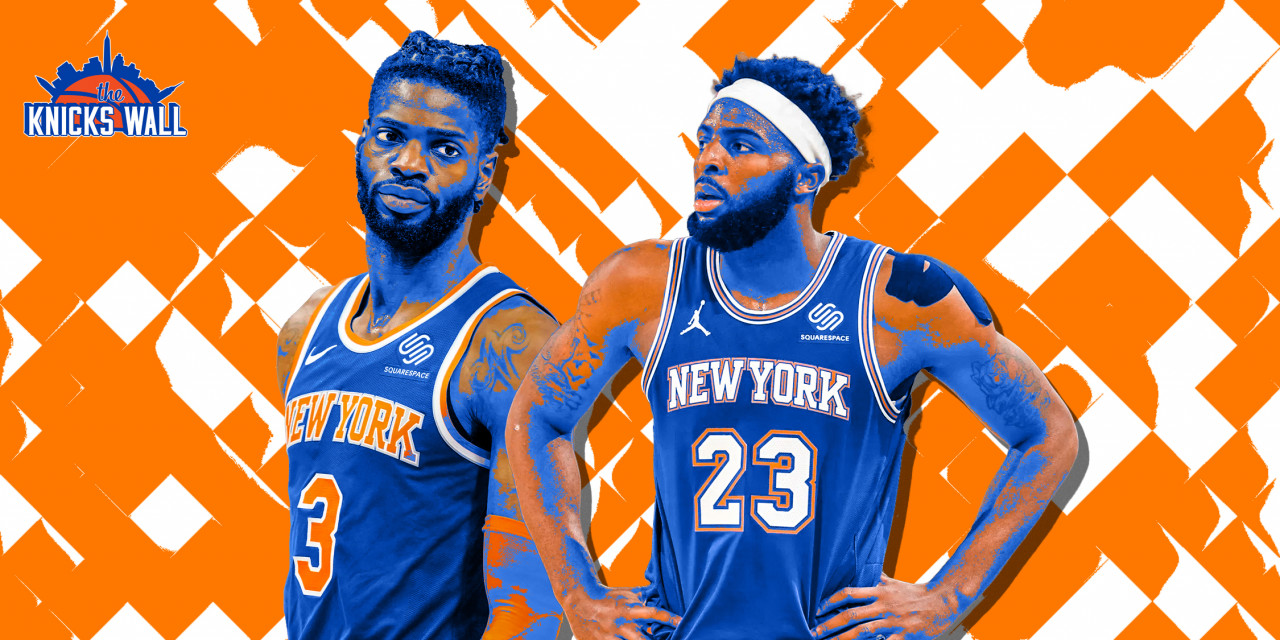 With Mitchell Robinson healthy and Nerlens Noel paid, the Knicks are challenged with managing their two starter-quality big men.

When the 2020–21 season began, the Knicks had a solid plan at center. Mitchell Robinson was their prized second-round steal from the 2018 NBA Draft, and the starting center position was his to lose. Going into his third season, the team expected huge improvements out of him with the highest workload of his career. If anything went wrong along the way, the team signed six-year vet Nerlens Noel to a one-year contract as an insurance policy.

Things seemed to be going according to plan in the beginning. Twenty-seven games into the season, Robinson was putting up some career-best numbers. Playing 27.5 minutes per game, Robinson averaged 8.3 points and 8.1 rebounds per game to go along with 1.5 blocks per game. Most impressively, he cut his fouling down substantially. Playing more than four minutes per game than the season prior, Robinson reduced his fouls from 3.2 per game last season to just 2.8.

I missed Mitchell Robinson so much. pic.twitter.com/bqxDsAm8vm

In that time, Noel served as his backup in the rotation, only playing more than 20 minutes in five games. Noel was serviceable, scoring no more than eight points in a game but pulling down a minimum of six rebounds in nine of the 22 games he played in during that span.

Things took a turn for the worst, though, when Robinson fractured his hand in a February game against Washington. He was due to miss extended time, and the Knicks were forced to cash in on the insurance policy of Noel. Still at a spry 26 years of age, he could easily handle the starter’s workload of at least 25 minutes per game. After all, Robinson was only expected to miss a month or so, and came back to the team after missing 15 games. Noel just had to hold the fort down until Robinson’s hand healed.

Just four games into his return, however, Robinson fractured his foot and was expected to be out for the remainder of the season. This put Noel squarely in the middle of the conversation, and the Knicks had to rely on him for the rest of the season just as they were gaining steam as a potential playoff team.

What Noel did, though, far exceeded any expectations the Knicks might have had for him. He ended up starting in 41 games during the regular season, and was among the most dominant defensive presences in the league. He provided the team 6.4 rebounds per game and was third in the league with 2.2 blocks per game. He was first in the league with a defensive plus/minus of 3.5, and had the second highest Defensive Rating in the league at 101.2.

WHAT CAN’T NERLENS NOEL DO AT THIS POINT? pic.twitter.com/ohz6XURmKf

With Noel being a free agent, it was only natural to be a skeptic as to whether the team would re-sign him or not, though. He had proven himself to be worth far more than the cheap one-year deal he was just playing on, and the Knicks had a healthy Robinson to look forward to next season. The Knicks opted to bring their big man back, at a price of $32 million over three years (team option for third year.) So now with a healthy, motivated Robinson coming back and expected to take back his starting role, how can the Knicks manage playing both him and a very proven Noel?

Regardless of whether or not Robinson would start, it’s natural to expect his minutes to be limited at the beginning of the season. He was only confirmed to be out of his walking boot two weeks ago, so he may be moving gingerly on that foot for some time. Also, Robinson has doubled down on his mission to bulk up for this coming season, sharing that he’s gotten to over 270 pounds after being listed at 240 for the 2020–21 NBA season. With the added weight on a recovering foot, Robinson’s path back into the rotation needs to be a slow one that doesn’t run the risk of putting too much work on it before it is back to 100%.

Mitchell Robinson typically around 250 pounds. Looks like he put on weight during rehab pic.twitter.com/PvzHGc3eju

So for the first quarter of the season, it’s safe to expect more of a 50-50 split in minutes from the two, possibly even 60-40 in Noel’s favor. Noel should enter the season entirely healthy. He had tweaked his ankle in the postseason series versus the Hawks but was able to play through it and had ample time to let it heal.

This certainly doesn’t mean that Robinson can prove himself early in the campaign and take the majority of the minutes at the center position back. Should he be able to maintain, or even exceed, the totals he was putting up to begin last season, he could easily be given the lion’s share of the time. Besides, his skill set is something that was largely missed at crucial points of last season when he was injured.

In the postseason series against the Hawks, for example, they constantly used screens to switch defenders off Trae Young onto Noel. Young, an anywhere-on-the-court three-point shooter, was able to either throw a shot up before the defense could react, or move around the screen and draw contact on Noel on his way to the rim.

Were this Robinson switching onto Young, he has the type of length to put an arm up against those three-pointers and have it be effective in altering the shot. Robinson could also react quicker around those screens, but his history of fouling trouble would still be an issue in such a situation.

On the offensive end, Robinson is a better pick-and-roll player, able to move off screens and catch lobs from just about anywhere near the rim. He certainly brings more of an offensive game to the table than Noel, averaging 8.3 points in his games played last season to Noel’s 5.1.

Today would be a great day to extend Mitchell Robinson pic.twitter.com/yFDaYU0OZR

Late in games, though, is where the Knicks would likely revert to running Noel with the starters next season. Outside of the playoffs where his ankle injury may have hindered his performance, Noel had been a stalwart presence in close games on defense for the Knicks last season. Take April 16th’s game against the Mavericks, for example, where Noel played 11 of 12 fourth-quarter minutes. He had a plus-five and brought down eight rebounds in the quarter alone in the team’s 117-109 victory. On April 21st against the Hawks, Noel played in about 14 of the 17 minutes between the fourth quarter and overtime. In this span, he had five rebounds and a block, recording a +13 in his minutes played during the 137-127 win.

Noel proved himself to be capable of shutting down fourth quarters, and should be trusted to get most of the minutes toward the end of close games. Besides, with Robinson’s history of fouling issues, the team might be better off using him earlier in games for his offensive skill set and to give Noel time to prepare for the fourth quarter.

Closer to the end of the season, assuming both centers are healthy, their minutes could turn out to be entirely situational. Based on opposing schemes, coach Tom Thibodeau would likely give the majority of the minutes to whomever would match up better. Referring back to the Hawks, Robinson would probably get more run given his ability to roam the court better and be a posable threat against someone like Trae Young. Against a team like the Sixers, though, where Joel Embiid holds prominence in the paint, Noel would be the better matchup.

Anything can happen, though, and Robinson himself has lofty goals on the defensive end for his return this season. He’s been adamant on social media about being in the running for Defensive Player of the Year, and thinks this season will be a special one for him.

I’m bigger and stronger can’t wait to see how this year go https://t.co/EdAIZJQrat

No matter how the dice roll, Robinson will be playing with the future on his mind since he’ll end the season as an unrestricted free agent. If he does end up in award races like he hopes he will, he could be nabbed by several suitors at a high asking price in the offseason. With plenty of time to go in the offseason, it’s entirely possible that the Knicks could extend him before the season even starts, too. While it would be great for the Knicks to have both of their rim runners in their future plans, they’ll still have that insurance policy of Noel they bought into last season.