How Would Myles Turner Fit With the Knicks? 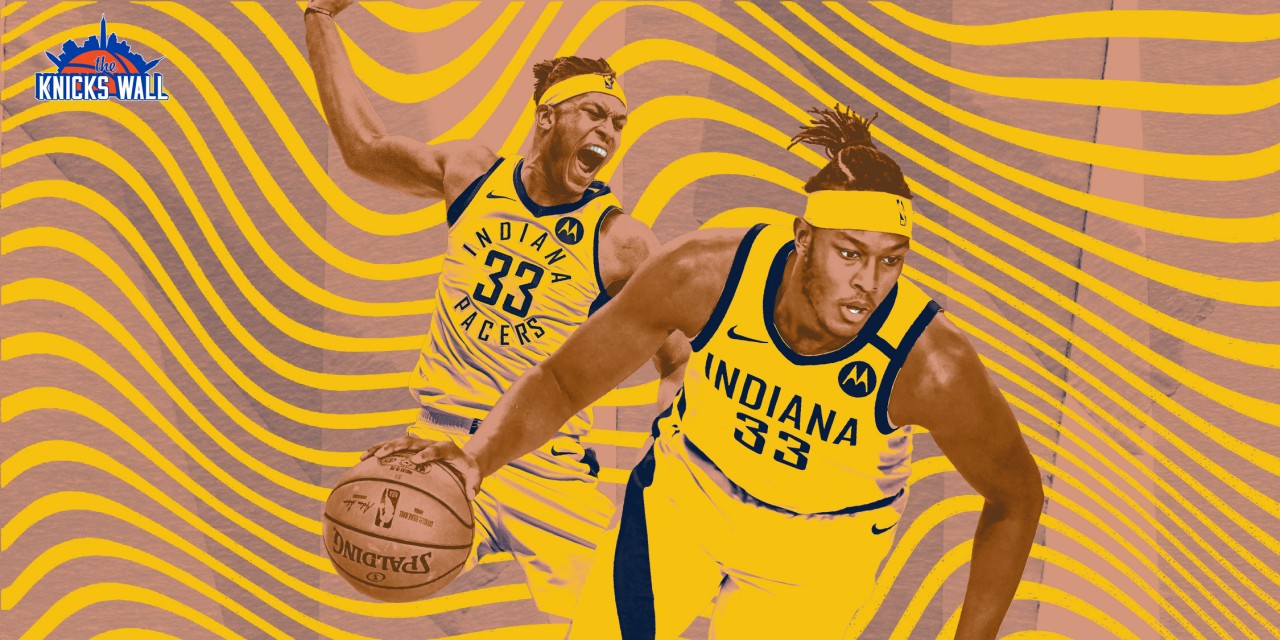 If Myles Turner is on the trade market, do the Knicks have the best offer? And is it worth making a move for him?

With the trade deadline less than a week away, trade rumors are coming thick and thin and the latest from the Indianapolis Star’s J. Michael reports that the New York Knicks are interested in acquiring Indiana Pacers big man Myles Turner.

Turner is in the midst of a career year, averaging 13.2 points, 6.5 rebounds, and a career- and NBA-high 3.4 blocks per contest.

This season, he has a 5.8% block percentage, when using Cleaning the Glass’ metric, meaning that just over one in 20 opponent shot attempts get sent back the other way. The only players with over 600 total minutes played to get near that are Nerlens Noel (!) and Rudy Gobert, 4.7 and 4.6%, respectively.

He’s also the defensive hub for the 13th-ranked defense Pacers while playing a majority of the serious minutes next to a defensive negative in Domantas Sabonis.

When he is on the court, the Pacers are 7.6 points per 100 possessions better on the defensive end and opponents shoot two percentage points worse at the rim, good for the top 22nd percentile among bigs, per Cleaning the Glass.

But Turner being good on defense is all common knowledge. At 25 years old (as of Wednesday), it’s expected for the young big to grow into his potential.

So why would they trade him?

It’s no secret that Indiana was close to trading Turner in a package that would’ve seen them land Gordon Hayward in a sign-and-trade with the Boston Celtics. But that was before the season before he showed the leaps he has this season.

On top of that, Caris LeVert, the main returning piece from the Victor Oladipo trade (commonly known as the James Harden trade) only just put on a Pacers uniform after missing time due to a mass on his kidney.

Indiana is currently ninth in the Eastern Conference with a 19-22 record but with their team now fully healthy, there’s no reason to think they can’t play stronger in the second half and climb the standings.

Michael echoes that sentiment to finish his report: “Shipping [Turner] away isn’t the answer. Finding a Thad Young-level backup four to pair with him is.”

However, the Pacers would be silly to not consider trading Turner. He’s having a career year and maybe this is the apex of his value.

If New York, or any of the interested teams, want to steal him away from Indiana, they might have to pay quite the price.

For starters, the Knicks would likely include one of Noel or Mitchell Robinson (or move one to a third team) so they don’t end up with three big men all asking for serious minutes and then some asset(s) to make it worth Indiana’s while.

Would the Knicks part ways with rookies Obi Toppin or Immanuel Quickley? Would Indiana value Frank Ntilikina? Are the Knicks willing to include draft capital?

The other teams rumored to show interest include the New Orleans Pelicans, Charlotte Hornets, and both Los Angeles teams. New Orleans might be able to outvalue the Knicks’ draft picks by number and value and who knows what Charlotte’s thinking with LaMelo Ball now out for the season.

If the Knicks are packaging together that collection of assets, they might be better off thinking about shopping for a better player on the trade market.

What would that mean for Robinson? It was only last season he set the NBA record for field goal percentage in a single season and at 22 years old, looks primed to grow with this young team. He’d likely be relegated to a permanent bench role behind the experienced Turner.

Moving past what the Knicks would have to trade, how would Turner fit with the New York’s All-Star Julius Randle?

Tom Thibodeau plays a lot of Randle at the four (93% of the time to be exact) and the team is around average when he plays with other traditional centers in Robinson or Noel, -1.0 and +1.8 per 100 possessions, respectively, using Basketball-Reference’s lineup combinations.

It’s so very Thibs to pair Randle, a non-elite three-point shooter, with two non-shooters on offense. It gets the job done since the 2020–21 Knicks are so defensive-orientated, but it’s nothing sexy.

Zoning in on the Mitchell pairing, in the 700-plus minutes the two have played together, the team takes -16.3 fewer three-point attempts per 100 possessions compared to the opponent and sees slight upticks in shooting splits.

Compare that with Turner and Sabonis, the preferred big-man pairing in Indiana, and the numbers are much more attractive:

While still a net-negative on the season, the pair take 4.8 more three-point attempts per 100 than its opponent.

The rebounding numbers take a dip comparatively and there’s the same shooting split issue, but there’s reason to believe mixing the two would work.

In theory, Turner, who can shoot threes at an average rate, 33% this season on 4.4 attempts per game (career-high), would be able to take the back seat on offense next to Randle and stretch the defense with his shooting.

The “stretch” isn’t world-beating, maybe it’s more of a light tug on the defense, but it’s better than the Knicks are getting from Mitchell and/or Noel right now and Thibs still gets to focus on defense and rebounding on the other end.

The fit wouldn’t be the worst in the world and likely better than what the team’s running out there at the moment with the 24th-ranked offense, per Cleaning the Glass. The issue would be the price and whether the juice is worth the squeeze.

If New York wants to push their chips in, is Turner the best piece they can get? Luckily that rhetorical only has to linger for less than a week because Leon Rose is about to enter his first trade deadline at the helm of the team.