Hunting for a Star: De’Andre Hunter Is a Two-Way Monster 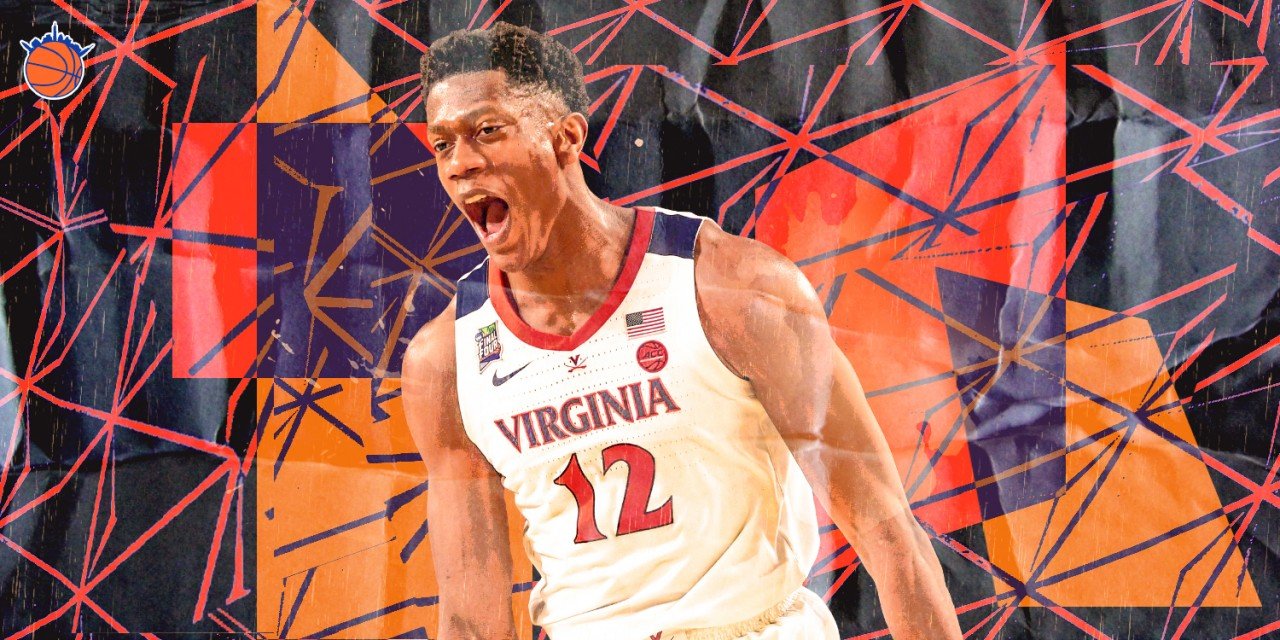 Will the Knicks surprise the NBA world with the third pick and select the Virginia forward De’Andre Hunter?

The Knicks Wall is setting a spotlight on the top prospects in the 2019 NBA Draft. Follow along with weekly features on the draft and players. Next up is Virginia forward De’Andre Hunter.

Coming out of Friends’ Central School right outside of Philly, De’Andre Hunter was an intriguing and versatile prospect known for his ability to stuff the stat sheet. The 6-foot-7 small forward was an absolute stud in high school, averaging 23.5 points, 9.8 rebounds, 3.0 assists, and 2.5 blocks per game during his senior season, per ESPN Stats.

Hunter is considered one of the most elite basketball talents to ever come out of high school in Pennsylvania but was largely under-recruited and didn’t receive a bevy of Division I offers. He was ranked the 72nd-best prospect in the ESPN 100 and the 14th-best small forward.

Hunter ultimately decided to join ACC powerhouse Virginia under head coach Tony Bennett and, undoubtedly, it was the correct choice. Although Hunter didn’t start any games in his freshman season, he was instrumental in the Cavaliers’ wildly successful regular season, scoring in double figures in 16 games while shooting nearly 49% from the field, per ESPN Stats. He also took home ACC Sixth Man of the Year and made the conference All-Freshman team.

His season was unfortunately cut short with a wrist injury suffered during the ACC Tournament, and Virginia went nowhere without him, getting blown out in a massive upset in the first round of the NCAA tournament to the UMBC Retrievers, earning a place in the history books for the wrong reason.

Despite massive disappointment and heartbreak for the Virginia Cavaliers and their fans, Hunter proved his value in a huge way his sophomore season, averaging 15.2 points per game on 52% shooting while winning ACC Defensive Player of the Year.

De’Andre was incredible throughout the season and turned up the intensity in the Big Dance, hitting huge shots and locking up many talented players en route to the Cavs’ first national title.

Hunter quickly rocketed up the mock draft boards as the season went on—and is now a projected top-five pick due to his incredible two-way style of play and his winning pedigree.

Hunter does a lot of things well and is able to contribute in nearly all facets of the game. He is an excellent defender and most likely the best stopper in this year’s draft class. His 6-foot-7, 225-pound frame and his 7-foot-2 wingspan allow him to guard many positions, both inside and on the perimeter. He isn’t an elite athlete by any stretch but is constantly locked in defensively and never takes plays off, making him an instant plus on that side of the floor.

The 21-year-old is a mature and team-oriented winner. He frequently deferred to star guards Kyle Guy and Ty Jerome when it was necessary and was comfortable not being the flashy star. Hunter makes no noise off the court and is class personified according to his teammates and coaches. He has a league-ready body and a league-ready attitude, and will work his tail off prioritizing winning over stats.

Offensively, Hunter finishes well around the basket, can shoot the three and hit mid-range shots at a good clip—a lost art in today’s NBA.  He’s proved he can go for 20+ points against good competition, like we saw against Texas Tech. There is nothing he is poor at offensively.

In De’Andre Hunter’s case, it seems like any weakness would be nitpicking, since he is such a versatile and widely talented player. At 6’7″ he isn’t the best rebounder in the world, and he sometimes looked a little timid banging down low with bigger players.

Hunter played the game a little choppy and wasn’t as fluid as other guys his size currently in the NBA, which prevented him from taking over games offensively. He didn’t often need to dominate games; with an excellent supporting cast, his team went up by 30 in many contests.

Another concern about the former Cavalier is that he isn’t elite an any particular skill aside from defense, and doesn’t have as high a ceiling as other comparable prospects.

Watching De’Andre Hunter, it’s hard to not see Kawhi Leonard in the way he plays. Both are elite defenders and don’t have any glaring flaws in their game. Leonard and Hunter were exactly the same height and weight coming out of school, which makes them the identical body type. Obviously, Kawhi is a tremendous All-NBA talent capable of carrying a team to the Finals.

Hunter may not be that guy; he isn’t as talented as Leonard. Leonard has much better handles and is a significantly more refined scorer, but their calm approach to the game and quiet, unrelenting intensity are very similar.

Other players who come to mind while analyzing Hunter are Andre Igoudala and Robert Covington. Hunter could be more of an Igoudala-type player—a key guy on a great team who can lock up the other team’s best player and hit clutch shots. Covington at this point in his career isn’t close to Igoudala, but he plays good perimeter defense and is a valuable role player.

With the Knicks picking third, Hunter will likely be available for the taking. It’s hard to see New York passing on the more talented R.J. Barrett or Ja Morant, but Hunter would bring much needed toughness, perimeter defensive intensity, and versatility to a Knicks team that lacked in all three of those departments last season.

It seems like Hunter is a more viable option for the Lakers at four or the Cavs at five, but the Knicks could fall in love with his championship résumé, betting he can turn into an elite two-way player. Hunter would thrive in David Fizdale’s up-and-down system, and wouldn’t be under the microscope as much—assuming the Knicks add big time free agents.

»READ: Will Darius Garland be the draft’s sleeper pick?