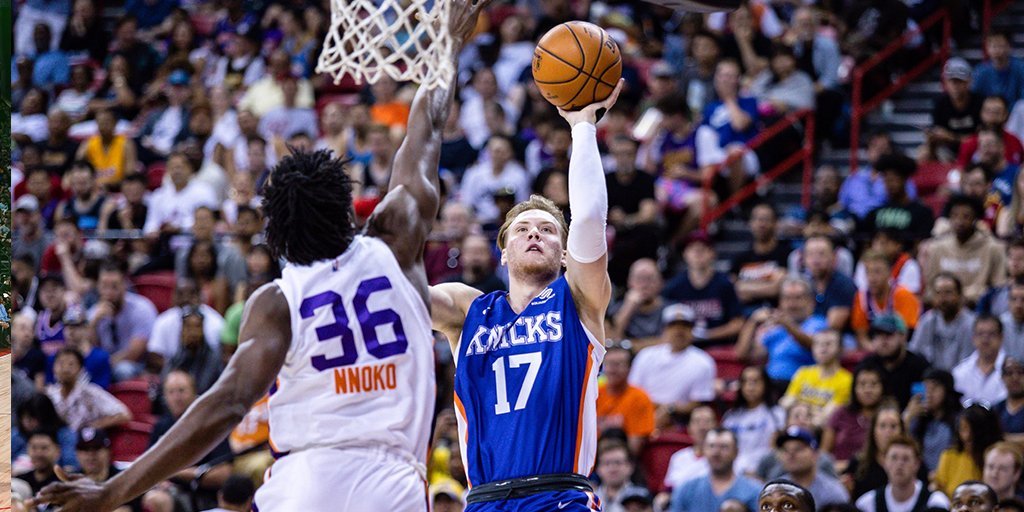 The Knicks fell in overtime to the Suns in their first non-suspended Summer League matchup, which saw a confident second-round pick Ignas Brazdeikis.

After their first game of Summer League was shorten due to an earthquake, the New York Knicks snagged their first non-interrupted loss of the Vegas exhibition tournament, losing to the Phoenix Suns 105-100 in overtime and falling to 0-2.

It’s summertime, though, so does it really matter? The sun is out, the Knicks are playing and the kids are out here looking spry. It’s good to see the likes of Mitchell Robinson, Kevin Knox, and R.J. Barrett out and about. There was a game, though, and the Knicks took an unfortunate L against a Suns team with some intriguing talent themselves.

With Allonzo Trier out, the Knicks lacked a strong offensive piece and it showed a little bit. Trier’s natural scoring ability was missed a bit, as the Knicks sputtered in spurts throughout the game on offense. Breaking: having a guard who can get to his spots and make plays is a good thing to have.

But Big Meech was out and about making big plays and making big dunks.

It was actually a pretty close game heading into the fourth quarter, but the SummerSuns went on a 7-0 run late to pull away and keep the Knicks at bay. Phoenix was led by the three-headed trio of Rayvonte Rice, Jared Harper, and James Palmer Jr. Palmer led the Suns with 23 points on 4-of-7 from three-point range.

Rookie Ignas Brazdeikis finished with 30 points and eight rebounds for the Knicks. Mitchell Robinson finished with 17 points, nine rebounds, and two blocks on 7-of-8 shooting.

These are the type of passes you can expect from RJ Barrett pic.twitter.com/keaYOIcJd6

Cool. Barrett had a bad game and a game that showed all of his flaws. As the lead offensive initiator, Barrett found himself getting to the middle of the floor and nothing more. He continued his poor shooting, finishing 3-of-15 from the floor and had questionable decision-making with the ball. Posting 10 rebounds is good, but everything else was rough.

The Knicks are back at it again on Tuesday, July 9th, against the Toronto Raptors. Tip-off is set for 9:30 p.m. ET.

»READ: Knicks Summer League: what to watch for in Vegas