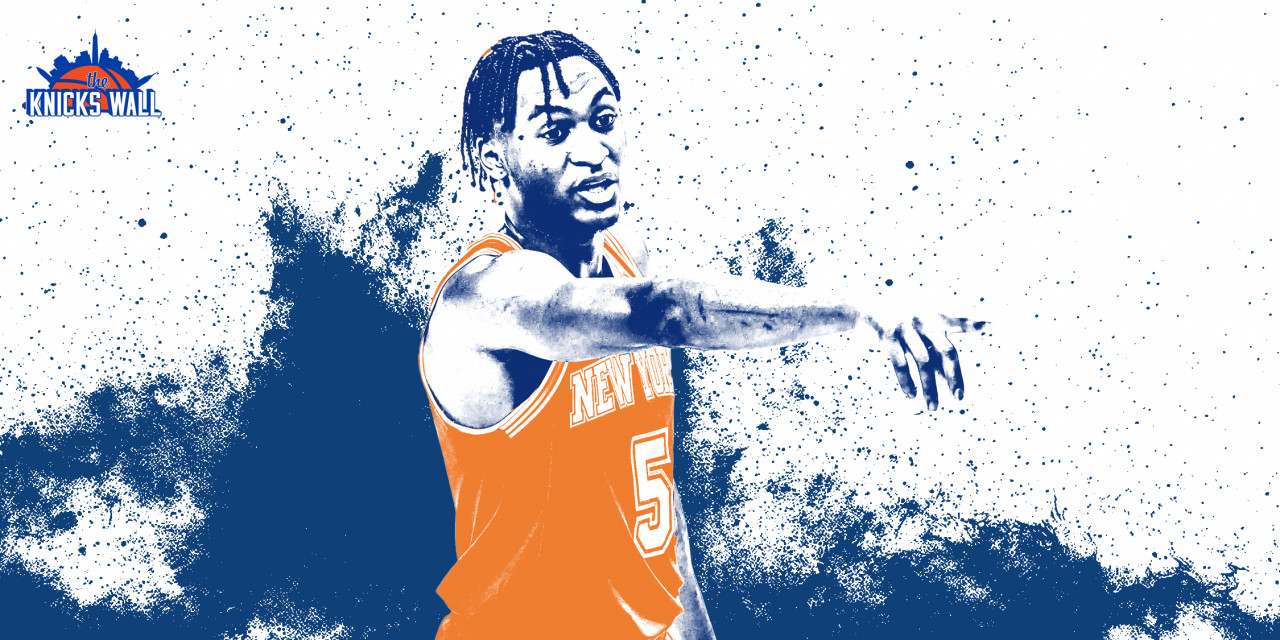 Immanuel Quickley will play off-ball next season, but everything about his game suggests he can be a lead offensive creator for the Knicks.


For the New York Knicks, Summer League was a success for their young talent. Obi Toppin, coming off a disappointing rookie season, assumed the role as the lead dog and played well, excelling in transition, and even flashed an improved low-post game. Rookies Miles McBride and Quentin Grimes lived up to their reputations as shooters, with McBride’s defense stealing the heart of Knicks fans. Rokas Jokubaitis and Luca Vildoza played well in spot minutes, and in the end, Jericho Sims stole the show, thanks to his elite athleticism and touch around the basket.

It was a successful summer for the Knicks, checking off the boxes for their young talent and even creating some questions about whether McBride should be in the rotation to start the season.

One of the smaller conversations, however, surrounded Immanuel Quickley. After criticism in the first game, Quickley rebounded and finished with 20.2 points, 3.8 rebounds, and 7.8 assists. Quickley was on “too good for Summer League” watch, thanks to his array of outside shooting and ball-handling ability. He balled out for the Knicks, but more importantly, he cooked as the lead guard for the Knicks.

The “Is Immanuel Quickley a point guard?” conversation seems less important with Derrick Rose and Kemba Walker in place. However, the small summer-league run suggests that Quickley could handle the point guard position in an emergency.

Can Immanuel Quickley Be An Offensive Driver?

Immanuel Quickley is great, but the question of whether he’s a point guard or not doesn’t much matter. In the modern NBA, teams operate with multiple ball-handlers. Milwaukee used Jrue Holiday, Khris Middleton, and Giannis Antetokoumpo to produce offense, while Phoenix leaned on Chris Paul, Devin Booker, and Cameron Payne on the other end. All six are largely different offensive players, but all hand their hand in their team’s offensive structure, ball-handling, and creation.

If you were to select the players on the Knicks who had the largest equality in the ball-handling and creation on the 2020–21 team, we’re looking at Julius Randle at the top, but it would go to Elfrid Payton, Derrick Rose, and Alec Burks. Those four, when on the floor, we’re the lead offensive drivers for the offense. Randle was more balanced, creating for others while also finding his own shot, Rose would run more pick-and-roll, Burks would largely work on self-creation for himself, while Payton’s goal was to attack the basket.

The difference between Quickley and those four is his outside shooting. Quickley can leverage his shooting and extend a defense. His shooting would put more levity to a Mitchell Robinson roll to the rim, would add some more effectiveness to a pick-and-pop game with Randle, and overall add another significant wrinkle in New York’s offense. Kemba Walker has the ability to snatch the soul of a defender with his handle and quickness with the ball in his hands, Derrick Rose’s craft and touch is critical in the pick and roll, and yet, Quickley using screens and launching threes could be the most intriguing element to New York’s offense if they give him the keys.

Asking if Quickley is a point guard is a bit restrictive while asking you to increase his offensive responsibilities and be another offensive driver opens up the conversation more. While the Knicks have several players in place to run the offense for this upcoming season, Quickley may be thrust into spot minutes in that role. I think he can thrive in, especially alongside another offensive hub like Randle.

Last February, I tweeted this:

I was going to come on here an ask you if guys if Quickley could be something similar, not as good as, Jamal Murray but Murray is so so good at shooting at the rim.

Ignore Jamal Murray’s scoring at the rim (81.6% on 98 attempts at the rim last season!); the comparisons seem apt. Murray, currently recovering from an ACL injury, was the starting point guard for Denver but wasn’t the lead initiator for Denver. That honor would go to reigning MVP Nikola Jokic. However, Murray was an effective guard with the ball in his hands because of his ability to knock down outside shots, offer and provide proper spacing for Denver’s defense, and was a solid secondary creator (20.0% assist rate or higher in three of his first five seasons).

Even the difference between the two seems overstated. Murray is elite at the rim, showing great athleticism when attacking the basket and proper craft and touch when scoring around the rim. On the other side, Quickley has good touch within 10 feet and can use his craft to get opponents off balance to either draw contact and free throws or launch one of his trademark floaters. That balance and touch around the rim make up for Quickley’s current inability to attack the rim.

Comparisons at your own risk, but Quickley getting a starting role one day and being an effective “point guard” wouldn’t shock me, thanks to his array of offensive tools and offensive I.Q. around the basket. Murray has succeeded as the Robin to Jokic’s Batman, and I can see Quickley doing that for Randle…or for whomever the Knicks acquire in the future.

Where Quickley Can Improve As A Creator

So, where does Quickley give pause? He’s an excellent shooter, he has good size, and he has a proper counter move. If he’s not launching a floater in the lane, he’s taking a step back and launching one from 30 feet. He’s actually made for running pick-and-roll and can stretch a defense if they aren’t too careful. This sounds like a point guard, so what’s the problem?

The “Quickley can’t pass” narrative is beyond dead. pic.twitter.com/xSEs3lgxcd

Personally, I want to see Quickley continue to progress as a passer. Above is a good pass, launching the ball up the floor for an easy finish, but his work in the halfcourt is where I want to see more progression. Quick finished with 127 assists to 58 turnovers in his rookie season and an assist rate of 16.2%. Per Basketball-Reference, 27 of his 58 turnovers were considered “bad passes.” He was good, but once Rose arrived in New York, the former Kentucky Wildcat saw his point guard minutes dry up, working more off the ball.

He’s a good creator as a secondary ball-handler, but he would be more effective with better passing reads as a lead guard. It’s not just throwing the lob for Mitchell Robinson on the pick-and-roll, but skip passes to cutters, finding open shooters in the corners on drives, pocket passes to the roll man, and more importantly, it’s being able to see things before they happen and being able to leverage that ability to make your own offense easy to manufacture.

Over the last decade, Chris Paul is an elite, all-world point guard and should never be compared to anyone outside of Magic Johnson and Stephen Curry. However, I wanted to provide a highlight tape of his season and how he leveraged his passes. Paul’s ability to get into the middle of the floor made Deandre Ayton’s job a bit easier, contributing to his breakout season. Using dual screens from both Ayton and Devin Booker allowed him to get an easier shot than normal. The passing in this video is what you want from a point guard.

But that’s the thing, Quickley doesn’t have to be an elite, all-world passer to be an effective lead guard. He has to continue to evolve as a passer, which involves more and more reps at point guard, allowing him to offer his own skill set on offense. As he continues to put the show in Las Vegas, the ability to be an effective passer is there, but doing it against a set halfcourt defense like the Miami Heat in the playoffs or against an elite perimeter defender like Boston’s Marcus Smart is another animal.

With Rose and Walker on the roster, the Knicks are secure at the point guard position on the surface, and Deuce McBride’s play in Vegas could push to get him more playing time. That means, injuries aside, Immanuel Quickley will find himself working off-ball. Still, there’s a chance for the Knicks to work him on the ball, allowing him to create for others and use his defense-bending shooting to create a true headache for opponents.

As far as the future, Quickley can become a “point guard,” but the question lies more in how much of the offense you want to give him. With Randle as the lead offensive hub for the Knicks, Quickley would assume a role similar to Murray off of Jokic—a ball-handler who can use his shooting and craft in the middle of the floor to leverage scoring opportunities. If that’s the role fans want him to take, then yes, Quickley can become a point guard. However, he also answers yes to whether you want Quickley to assume a larger role of the offense with the ball in his hands, which is much more exciting for the Knicks and their future.