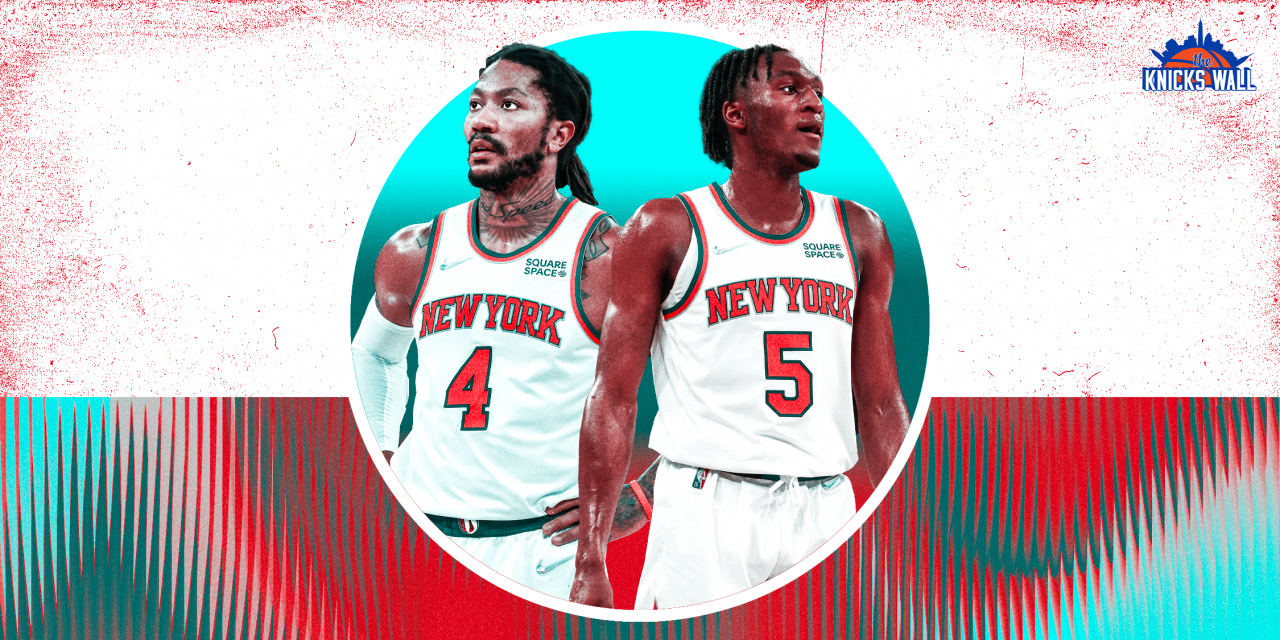 For two years, Immanuel Quickley and Derrick Rose have stabilized the Knicks. What can we expect in year three?

The definition of insanity is doing the same thing over and over again and expecting a different result. When it came to rotations last season, the New York Knicks head coach Tom Thibodeau met the criteria.

Last season, one of the few bright spots for the New York Knicks, aside from the revelation that shooting guard Quentin Grimes could be a valuable rotation player and RJ Barrett taking major leaps offensively, was their bench unit.

In most games, it felt like the bench was the only squad that showed up to play for the Knicks. More often than not, they played with far more tenacity, faster pace, and smarter decisions on and off the ball than the starting unit, which often lagged to start contests. Those lags would put the team into holes the bench needed to climb out of, only for Thibodeau to bring back the starting unit who would, again, dig a hole that was too deep to overcome.

Much of the success of New York’s bench could be attributed to the guard play of Immanuel Quickley, Derrick Rose, and Grimes, when the latter two were available to play. Quickley, a now third-year guard, started the year as a threat from three-point range but not much else. But as the season progressed, he started to slowly come into a playmaking role alongside fellow third-year player Obi Toppin and alongside more seasoned Knicks in Barrett and Mitchell Robinson. Rose, of course, has an extensive resume, having been the league’s youngest MVP and most recently one of the top candidates for the Sixth Man of the Year award. The honor went to the Utah Jazz’s Jordan Clarkson, but Rose finished third in the voting.

While no starting lineup will likely be solidified until right before the start of the regular season in October of this year, given the recent signing of point guard Jalen Brunson, it’s to be assumed that Evan Fournier or even Quentin Grimes may slide into the backcourt starting position alongside Brunson. Therefore, the question remains as to whether Rose and Quickley can continue to build off the bench magic from last season.

The starting backcourt last season of Kemba Walker, who has been waived since being traded to the Detroit Pistons during the NBA Draft, and Fournier, whose defense often left much to be desired but who put up a historic shooting season, was nothing to write home about. Often, their inability to play defense, space the floor, or push the pace for their front-court teammates led to deficits left for the bench to clean up.

The bench, when helmed by Quickley and Rose, did just that. The bench unit most often played that included Rose and Quickley featured Robinson, Burks, and Toppin, and that unit had an offensive rating of 124.6. Comparing that to the offensive rating of the starting lineup to begin last year, which was 102.8, it’s clear that the bench led by Rose and Quickley far outperformed what Thibodeau cooked up for the 2021-22 Knicks.

Even when including the older veteran in Taj Gibson, who has signed a one-year deal with the Washington Wizards after being waived by the Knicks, Rose and Quickley squeezed out a better offense with a rating of 112.2. The defense was even better for the various bench units seen throughout the season. While the two most common starting lineups for New York posted a 113.7 and 116.6 defensive rating, respectively, the two most common bench units that featured both Rose and Quickley only allowed 105.1 and 105.8 points per possession.

Aside from those basic metrics, their pacing was just obviously better with Quickley and Rose running the show. The two starting units most commonly deployed had a pace of 98.88 and 97.20, while the bench unit had one of 101.07.

These metrics only tell the numbers side of the story, of course. They passed the eye test as well, though, and it led many to wonder why a young, spry guard like Quickley or a seasoned and reliable veteran like Rose wasn’t inserted into the starting lineup as a spark for a team desperately needing one. Adjustments were eventually made, like inserting guard Alec Burks into the starting rotation in place of Walker, who was asked to sit out for the rest of the year after re-injuring his knee, and having Julius Randle and Barrett play more alongside Quickley. But those changes provided barely any improvement to the teams’ offense, as they had to deal with a slumping Randle for much of the year and the defensive liability in Fournier.

What Can They Do Next Year?

Assuming Rose returns to the team healthy after undergoing ankle surgery last season, and assuming that Quickley is once again relegated to the bench to begin the season, they’ll both have new players to gel with and provide a spark off the bench in games. Jericho Sims is a high-flying center who seems to have endless hops off rebounds and off screens. He’d pair well with either guard, as he has been improving his screening ability in Summer League which has led to highlight reel-worthy lobs and finishes that have impressed many.

They also have the low-radar signing of Isaiah Hartenstein. Hartenstein is a stretch five and could help Rose, who looks to facilitate far more than Quickley, generate more offense and space the floor.  Additionally, they still have another flyer, literally, in Obi Toppin, who was stellar to end last season in “garbage time” April. He plays off of Immanuel Quickley extremely well, and his presence on the floor alongside him and Rose is invaluable given his ability to score in the paint on iso-plays or off the ball as a cutter.

What should be an exciting development for this bench unit is also the further development of Quickley as a driver as opposed to a catch-and-shoot assassin from deep. He improved his playmaking last year from 2.0 assists per game to 3.5. The change might seem small, but by the eye test, it was obvious that he was more comfortable letting the ball zip as opposed to waiting for it to arrive to him in the corner pocket or for a deep ball.

He could learn how to drive more effectively from Rose, who has been known for his crafty scoring for years. This was more the case when he was younger and more athletic, but he still has the ability to finish strong at the rim given enough room. Quickley, on the other hand, tends to rely on his nifty floater or kick-outs to shooters, even when it feels like he has an opening to finish at the rim. But with experience, he could grow this aspect of his game as he grew his dishing ability, which will only continue to help the bench solidify itself as ol’ reliable once again for a Knicks team that will need to gel with one another amidst new faces.