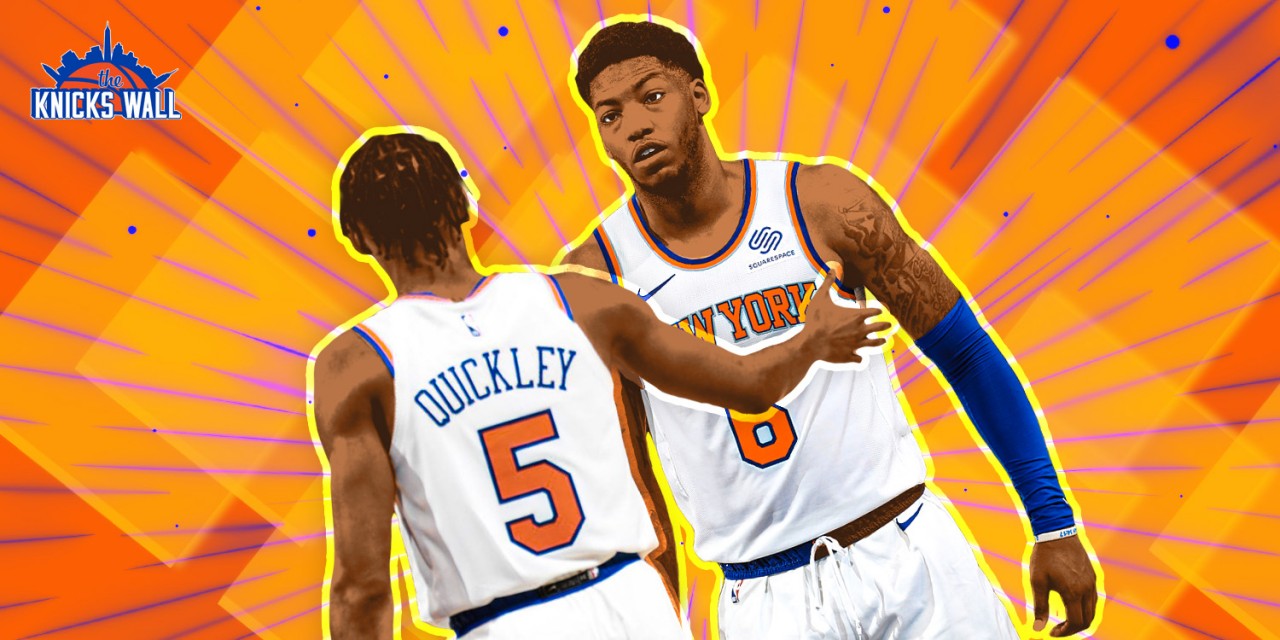 When Immanuel Quickley returns from injury, Knicks coach Tom Thibodeau will have the difficult choice of managing a promising rookie and a proven vet.

I would say it’s Stephon Marbury, who averaged 18.2 points and 7.0 assists over five seasons as a Knick. Two other solid floor generals came after Marbury—Jeremy Lin and Raymond Felton—but their times came and went rather quickly. Linsanity lasted just 35 games. Felton had a strong 54-game showing in the 2010–11 season before being included in the Carmelo Anthony trade. He made his way back to New York ahead of the 2012–13 season but upped his thiccness to levels that would later be made famous by Kyle Lowry while failing to match the productivity of the Toronto Raptors All-Star.

Whichever name you pick doesn’t matter that much because the point still stands: it has been way too long since the Knicks last had a truly good point guard. For years, the position has been a revolving door that brings in drab, ineffective point guards one after another.

The Knicks could continue to walk that path this season. But not if Immanuel Quickley has anything to say about it.

No other team’s fan base would be as enamored with a player whose notoriety comes solely from two good games in the preseason. But that’s just how starved the Knicks are of a good point guard, let alone a good young point guard. With just two strong showings, Quickley has already captured Knicks’ fans’ imagination. When the 25th overall pick of the 2020 draft recovers from his hip pointer, he could fulfill their dreams of having a well-rounded floor general.

After his first preseason game, in which he only played nine minutes, Quickley had a pair of impressive games in which he played at least 25 minutes each. In his first one, he put up nine points and seven assists in 25 minutes. Although he put up ugly shooting splits of 3-of-11 from the field and 1-of-6 from beyond the arc, he showed impressive ball-handling and playmaking skills and quick decision making.

And then the real fun began. Quickley was named the starter of the second game while the incumbent starter Elfrid Payton was inactive. A beautiful stat line of 22 points on 7-of-12 field goal shooting and 3-for-5 three-point shooting, five assists, and five steals later, IQ firmly entrenched himself as one of the most beloved Knicks ever.

Okay, not ever, but definitely for the time being.

Although there are reasons to be bullish about Quickley, he still has to prove himself further. He has only logged 12 minutes of action in the regular season and his shining moments came against the Cleveland Cavaliers, a notoriously bad defensive team these past few years. He might already be New York’s best option at point guard, but he has yet to claim the starting role.

Quickley’s main opponent in the fight for the starting point-guard role is Payton, a seven-year veteran who started the most games at the point guard spot last season for New York. Payton throws accurate passes, has posted good assist-to-turnover ratios throughout his career (including a top-20 mark last season), and has quick hands that are good for capturing steals. But that’s about all he brings to the table. His shooting is woeful, his defense—especially off-the-ball—is slothful, and his scoring is lackluster.

Even with Payton’s deficiencies, Quickley will have to work his tail off to beat out Payton for the starting point-guard role. Head coach Tom Thibodeau’s track record shows that he is not too keen on giving rookies big roles. The last time Thibodeau worked with a rebuilding roster, he handed the keys to the offense to a veteran point guard instead of a rookie.

As the head coach of the Minnesota Timberwolves in the 2016–17 season, Thibs started Ricky Rubio, a good but unspectacular 26-year-old, over Kris Dunn, a rookie who was selected at no. 5 in the 2016 draft. Dunn had a poor rookie season and averaged fewer than 12 minutes a game playing alongside Karl-Anthony Towns, Andrew Wiggins, and Zach LaVine, the Wolves’ most important youngsters. He spent more time playing in a trio with Nemanja Bjelica and Shabazz Muhammad than he did with Wiggins and Towns.

It’s difficult to speculate what that did to Dunn’s development; he was included in a package that Minnesota traded to the Chicago Bulls for Jimmy Butler the following offseason, and eventually became a player that is serviceable but not worth spending the fifth overall pick on. Still, it’s the best historical account of how Thibodeau deals with a young, highly touted point guard.

The early returns from his time in New York show that Thibs still prefers the veteran to the rookie. That preference, however, has allowed Quickley to play alongside fellow rookie Obi Toppin.

Toppin played backup power forward behind Julius Randle before the New York native strained his calf. He and Quickley spent a good amount of time together during the preseason, even when Quickley was elevated to the starting lineup. The two neophytes helped New York come back against the Cavs in their third preseason game with fellow youngsters R.J. Barrett, Mitchell Robinson, and Kevin Knox. Toppin and Quickley played in the second unit in New York’s season opener.

If Quickley can’t secure the starting gig, playing most of his minutes alongside Toppin is the best thing for the development of him and the team. Payton and Randle may be relatively young at 26 years old, but Quickley and Toppin are more important to New York’s future. Building chemistry between the two youngsters is important.

Payton’s poor scoring abilities, namely his ghastly perimeter shooting, limit what the Knicks can do offensively. Quickley already looks like a better shot creator. If he can shoot triples reliably enough for defenders to honor him when he’s off the ball, it’ll open up driving lanes and lob-finishing space. He looks to draw fouls and shot free throws at an absurd rate in his final collegiate season—92.3% on 5.2 attempts per game. Meanwhile, Payton has never averaged over three free-throw attempts in his career, and averaged 1.9 with the Knicks last season, shooting an appalling 57% from the charity stripe.

The Knicks wouldn’t lose anything by playing Quickley over Payton, who can already do what Payton does—run pick-and-rolls, drive into the lane and take floaters, make plays for others and defend opposing guards—at a respectable level. Payton, by virtue of having much more experience at the professional level, may be regarded as the better playmaker, but Quickley hasn’t been bad. His passes have been accurate and timely and his defense is much more intense.

Quickley, with just a couple of intriguing preseason games to his name, has become a glimmer of hope for the Knicks. But as Knicks fans know all too well, the scoreboard showing hopeful point-guard solutions that have flamed out versus ones who panned out reads “Kinda one-sided isn’t it?” on the flame-out’s side. Quickley shares the roster with two false prophets that were seen, at one point or another, to be potential point guards of the future.

Frank Ntilikina was drafted eighth overall only to show minimal improvement. His defensive chops are good and his passing is decent. That’s about all Ntilikina has contributed, contributes now, and will seemingly keep contributing. Dennis Smith Jr., who was drafted by the Dallas Mavericks the spot after Ntilikina and was traded to the Knicks in his second season, had a promising 21-game audition for the Knicks. Yet, at the young age of 23, it’s unknown if that version of Smith will be seen again.

Quickley has a combination of confidence, tenacity, and skill that neither Ntilikina nor Smith do. Although it remains to be seen how consistently the rookie point guard can contribute, he has already flashed a wider array of skills than any of the other Knicks point guard. He could be the long-awaited solution to New York’s point guard predicament, but he has only just started to prove himself.

The Knicks’ point guard situation has been as dire and depressing as the Cleveland Browns’ quarterback turnstile. The list of names of all the New York point guard options this century would mirror, if not exceed, that of Cleveland’s quarterbacks. Time will tell if Quickley breaks the spell or if he’ll just be another name.