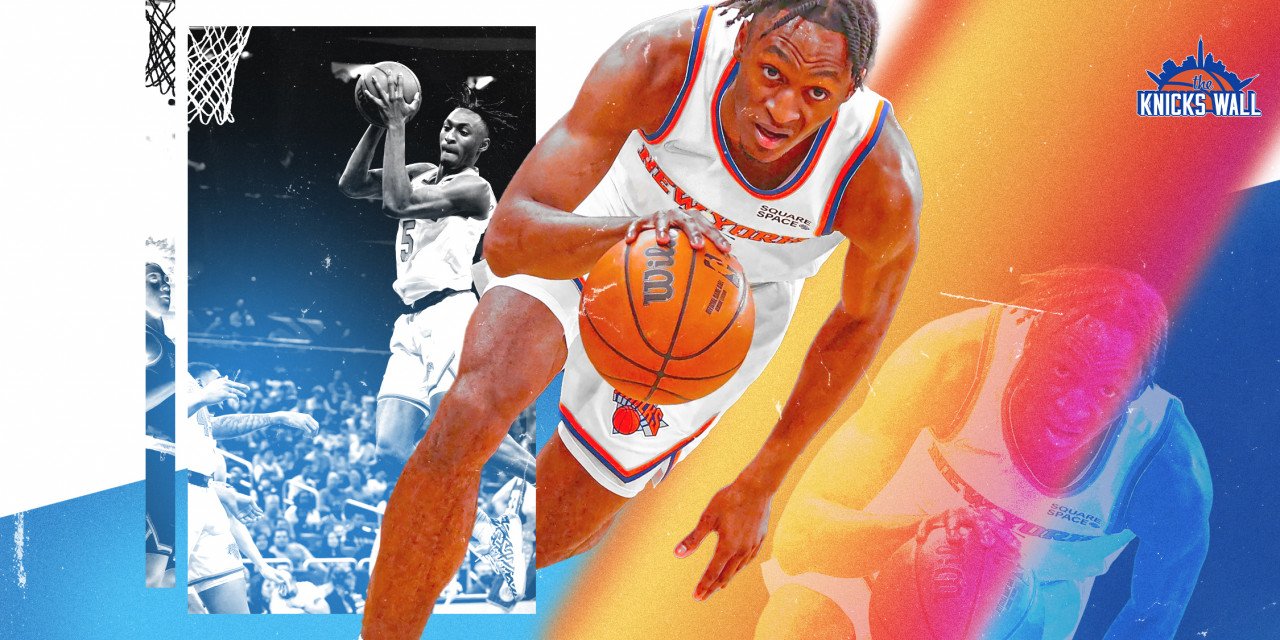 Immanuel Quickley emerged from his sophomore slump by flaunting a brilliant playmaking knack that drives the Knicks’ offense.

The first triple-double of Immanuel Quickley’s young career came and went without much fanfare. As his New York Knicks beat the Orlando Magic by 30, he dropped 20 points, pulled down 10 rebounds, and doled out 10 assists. He didn’t lead the way in scoring, rebound, or plus/minus. And although he played 34 minutes, he still wasn’t a starter that night. When it was over, no one really talked about it, aside from a collection of tweets and Knicks message boards galore. All things considered, that’s a tiny group.

It was, however, historic. With this milestone, Quickley became the first Knick to record a triple-double off the bench since Mark Jackson in 1991. And at 22 years, 290 days old, he became the second-youngest player in team history behind Kenny Sears back in 1955 (22 years, 140 days). But even with these impressive caveats, watching a young player put things together isn’t necessarily historic. It’s often tough to gauge whether or not a young player will have much of a successful career at all based on the small sample that their slate of appearances provides.

The best of Quickley’s slate, however, is enough to raise eyebrows. That his best has all come via consistent bursts of brilliance is all the more exciting. Just imagine what he might offer if given opportunities as consistent as his play.

Now, of course, that’s not all that has held Quickley back from making the leap from reserve to reliable. He has existed in a grey area up to this point in his career—questions like “Is he a point guard, or a combo guard?” and “Can he be trusted to make the plays needed from a true floor general?” have been floated almost incessantly since his breakout moments last season. He’s proven to be a shaky shooter, inconsistent, and somewhat erratic. But this season—which recently turned into a quasi-experimental opportunity thanks to the Knicks’ struggles—has allowed him to learn by doing a bit more than he might have been able to do in 2021 as the team vied for playoff success.

Not coincidentally, Quickley’s game-to-game responsibilities have experienced a serious uptick since Derrick Rose (inactive since December 21st) and Kemba Walker (away from the team since the All-Star break) were effectively shelved for the season. Since New York’s first game back from the break, Quickley is averaging 14.8 points, 5 rebounds, and 4.2 assists per game (26.4 minutes per, up from his season average of 22.6). Swap those stats out for his numbers per 36 minutes, and he’s even more impressive: 20.1 points, 6.8 rebounds, and 5.8 assists. The sophomore is also shooting 44% from the field and 39.2% from three during that stretch (also per 36 minutes). He has shown flashes of that sort of output in the past, but it’s becoming more and more consistent.

What stuck out the most when looking back at this stretch was Quickley’s increasingly savvy playmaking. It seems that with every passing night, he’s becoming more attuned to the options he has on hand, especially as a passer. There were stretches this season where IQ was doling out five dimes for every four turnovers. But since the All-Star break, his assist-to-turnover ratio sits at 3.56; that ranks him 15th out of 227 players who have played in at least 10 games since the break and played at least 20 minutes in those games. (If you took away all filters, Miles McBride would rank fifth in the league during that stretch. Play the damn kids, Thibs.)

Quickley leads the Knicks in assists (84) and assisted points (199) since the All-Star break; the gaps between his numbers and that of his second-ranked teammate, RJ Barrett, are 50 and 121, respectively. No one on the team is having even close to as significant an impact on his floormates when it comes to sharing the ball. Keep in mind that he’s not even the first man to touch the ball off the tip. He still comes off the bench.

Also, there’s the matter of what could be. Not every pass will result in a bucket, but they all could. Since the break, Quickley is averaging 8.3 potential assists per game. For reference, that ranks him near Jimmy Butler (8.2), Buddy Hield (8.5), and DeMar DeRozan (8.6). Quickley isn’t in the league of Butler or DeRozan overall, but he creates as many opportunities for his teammates to score. That’s an electric jump, considering he averaged 3.7 potential dimes just a season ago when he was a neophyte.

Quickley is being more aggressive, occasionally making some of the riskier passes that have a 50/50 shot of resulting in a turnover. But here’s the thing: they don’t. I’m not reporting this, but don’t be surprised if it comes out in the near future that Quickley has some sort of Doctor Strange-esque ability to see the outcome of a possession before it even occurs. He shouldn’t be able to assist his teammates the same way LaMelo Ball does every third trip, and yet IQ seems to be developing a real knack for that exact sort of flashy play.

The Knicks’ sophomore guard is not Ball, nor is he Jason Williams or Magic Johnson. But maybe, just maybe, IQ has a way to go forward in time “to view alternate futures, to see all the possible outcomes of the coming conflict”—all 14,000,605 of them—and pick out the one in which he wins.

There are uneasy feelings that come with Quickley’s tendencies in pick-and-roll sets, as it’s almost impossible to tell whether or not he plans to shoot or pass after using the screen. But despite those uncertainties, the Knicks are wildly effective with him serving as the ball handler. They’re scoring 0.94 points per possession in those scenarios, which ranks him 32nd out of 129 players who have run at least 100 of those sets this season. His frequency in these sets sits at 33.9%, which puts him on par with Zach LaVine, Jalen Brunson, and Fred VanVleet, to name a few. And his turnover percentage is just 10.9, 25th out of those 129 players.

For good measure, the Knicks are scoring 5.3 more points per possession when he’s on the floor this season, ranking him in the league’s 87th percentile, per Cleaning the Glass. You can’t tell me that this is a guy who belongs in a warm-up while Alec Burks trots around in his game jersey.

Despite his vacillation as a playmaker, Quickley is regularly efficient. Unpredictable on occasion? Maybe. Frustrating? Not as much as it is to see him sitting on the bench to start a game or during crunch time. While he’s hardly a complete player, it’s a fact that Quickley is becoming an undeniable one, a quality source of offense and energy who simply can’t sit on the Knicks’ bench when it matters most.