Immanuel Quickley May Be More Than Just A Neophyte 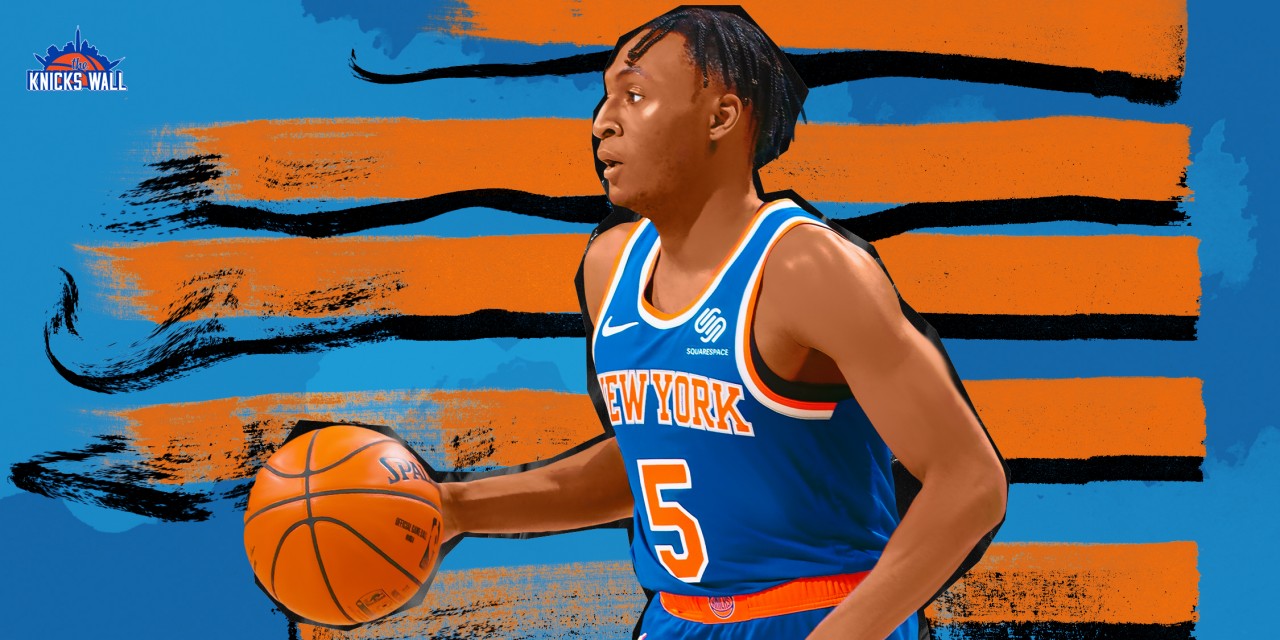 A 21-year-old first-round pick, Immanuel Quickley is quick to display maturity, confidence … and the tendencies of a rookie.

“Those guys can play [point guard] or off the ball, create, shoot and help the team in a multitude of ways,” he reasoned.

His self-ascribed player comps are both indicative of the rational intelligence that befits his initials, and his outsized ambition and confidence.

None one of those players has made an All-Star team (as Quickley may not), but each excels in certain facets of the sport while possessing distinct physical and stylistic similarities to the Knicks rookie.

McCollum, who would have an All-Star nod if he played in the East, is a mid-range maestro, and one of the most productive and craftiest 6-foot-3-or-under scorers in hoops. Like Quickley, he’s listed at 6’3″, 190 pounds.

The 6-foot-1 Williams has been getting buckets in myriad ways since Quickley was in pre-school. Sweet Lou has averaged 20.9 points per 36 minutes for his career, and has infused squads with microwavable scoring since 2005, earning three Sixth Man of the Year awards in the process.

Notably, both players are fearless in the clutch, experts at drawing fouls, and do work with the floater.

Bradley has been one of the game’s stingiest perimeters defenders for a decade, with the valuable ability to torment wings above his weight and in the full-court.

All three carry at least eight years of NBA experience. By contrast, Quickley—while generally impressive, mature, and bright—has played eight games of pro ball, has a long way to go before he approaches those levels.

The 2019–20 SEC Player of the Year is a bouncy, competitive sharpshooter with a relentless motor that manifests in his on-court tenacity and off-the-court dedication. He was typically labeled as an off-ball threat by draft scouts, but he takes pride in his pick-and-roll and passing skills, along with his capability to harass bigger guards. Like Bradley, he vocally relishes the defensive end of the floor.

His playmaking is raw and under-developed. Quickley will almost always opt for a floater rather than a rim-attack—a weak point. He usually makes the fundamentally sound pass—a swing, a kick-out—but rarely creates a look with his vision. His handle is adequate, but he’s yet to hunt NBA defenders down off the dribble.

Elements of Quickley’s demeanor and skill set are advanced beyond his years. If you knew nothing of the Knicks and solely read his quotes or heard players and coaches discuss his preparation, work ethic, and knowledge of the little things (like duping refs), you might even mistake him for a seasoned vet.

Plus, the 21-year-old has no shortage of belief. In November, he told the New York Post that his confidence was at an “all-time high.”

“He’s confident,” R.J. Barrett said. “Very confident. That might just be half the battle. He comes in, is confident. Makes the right plays. He gets fouled a lot. Plays great defense.”

“It makes it so easy because he’s so confident and vocal,” Rivers added. “Sometimes rookies are quiet and unsure. … He makes every movement—whether it’s right or wrong—confidently … I’m constantly looking for ‘Quick’ because I trust him to make the right decisions. At his age, his first year, he just doesn’t play like a rookie.”

Quickley’s confidence has translated to game action on a few enticing occasions since the preseason—more than enough to wet Knicks fans’ beaks. However, it’s not quite as glaring as Rivers describes. In terms of execution, comfort, timing, and playmaking, Quickley has frequently looked like a reluctant rookie without a proper training camp. By the way, that’s O.K.

In his first preseason action, he shot 1-for-3, which Thibodeau chalked up to “jitters.”

“He’s not afraid of competing,” Thibodeau added. “I love his enthusiasm. Great work ethic. Great student of the game. He’s in early. He stays late. He comes back at night. He does all the things that you would like a rookie to do.”

In his second preseason game, on Dec. 18 against the Cleveland Cavaliers, IQ dropped 22 points and five assists, sending #KnicksTwitter ablaze for the first time. (Afterwards, he further endeared himself to hoop nerds by citing advanced stats regarding his floater).

He followed up that contest with a 3-for-11 performance.

Quickley suffered a hip pointer 12 minutes into the season opener. In his return on January 2nd, he dropped nine points in 14 minutes and played like a savvy veteran, earning postgame praise from his head coach.

“Good energy, clever in terms of drawing fouls,” Thibodeau said. “He’ll get his rhythm really quickly … He’s really talented and he’s smart and he’s a great worker. I love his attitude, I love his approach. He’s going to be a really good player in this league for a long time.”

The hype train reached its peak speed on January 4th. In 19 minutes, IQ was the sparkplug of a comeback win over the Atlanta Hawks. Doing most of his damage in the second half, Quickley displayed flashes of Williams, McCollum, and Bradley. He had 16 points on 4-for-7 shooting, hit two of three from deep, and made all six of his free throws. He even showed off his slyness on a fake-dribble handoff dunk.

WHAT A MOVE FROM IQ pic.twitter.com/QbnYrv1pNW

Tellingly, Thibodeau, a veteran-leaning coach, played him for the entire fourth quarter. After the fact, Thibodeau posited Young as a comp for IQ.

“He’s a real student of the game,” Thibodeau said. “He’s watched quite a bit of Trae Young, and the one thing about NBA players, they’re very intelligent, they’re always going to figure out how the game is being refereed, and how they can take advantage of things. … I think what Quick has done—and it’s all set up with the shooting ability. Because you have to be up.”

Quickley’s tape crunching and defensive prowess were noticeable when matched up with Young. The Hawks’ All-Star was 0-for-2 with a turnover against IQ—a crucial late-game strip.

You can get a feel for Quickley faith in his own defense as he picks up Young fullcourt.

In the wake of his heroics versus the Hawks, Quickley was knighted as the Knicks point guard of not just the future but the present. His jersey may have even been hung in the Madison Square Garden rafters.

Since then, no. 5 has descended back down to earth.

He saw six minutes in the January 6th win over the Jazz, as the other half of the “Quivers” backcourt played the hero.

On January 8th, the refs caught onto his tricks, and he relied too heavily on his foul-drawing tactics, to no avail. He finished 1-for-9 from the floor, forced the floater, and looked overmatched by the Oklahoma City Thunder guards on defense. Two days later, he went 0-for-4 against the Denver Nuggets (he did flash this sophisticated cross-court pass).

“He’s just got to settle down. … He’s still working his way back,” Thibodeau said.

In 28 minutes against the Charlotte Hornets on Monday, his performance mixed the qualities of a newcomer and an old-timer. He was composed, energetic, and hesitant. He excitedly led a fast break, only to pass the ball up before getting into the lane. Seemingly affected by his ice-cold hand, he was unsure when to let it fly, and looked a bit too excited to fundamentally swing the ball rather than considering making a play. For much of the second half, he settled far beyond the three-point line (often off-camera), not exactly eager to receive the rock.

Overall, he went 1-for-10 from the field and 1-for-6 from downtown. He did add four rebounds and three dimes.

Fortunately, Quickley has a mature and useful ability to compartmentalize. He may allow his offensive uncertainty to affect his shooting (or vice versa), but not to disrupt his overall effort or team-first nature.

Quickley's so smooth you have to see it 3 times 👀 👀 👀 pic.twitter.com/IQLWfm9c8Q

He’s chatty, with conviction, on defense (a habit for which he earned praise from his Kentucky teammates), and his understanding of switching and positioning seems both learned and innate. On one possession, after Mitchell Robinson bit on a LaMelo Ball three-point pump fake, Quickley seamlessly switched onto a driving Ball and contested the layup without fouling. He also seems to enjoy boxing out bigger dudes.

“Even though Quick didn’t shoot the ball well, I thought he played well,” Thibodeau summarized.

As Quickley will tell you, he doesn’t get nervous playing in the Association.

Now, I can’t speak for Quickley’s central nervous system. Understandably, though, he’s looked jumpy, reluctant, and a bit unsettled for many of his NBA minutes. Regardless, his self-assurance is admirable and encouraging. His three-point shooting will come around once he gets comfortable seeking out in-rhythm looks, as opposed to deferring to his more experienced teammates (à la Lou Williams).

Don’t know if this will bring the temperature of the nation down but Immanuel Quickley is on the court at MSG working. pic.twitter.com/CiR6sWvZ3e

In Wednesday’s loss to the Brooklyn Nets, Quickley came out like he was offended by his own hesitancy against the Hornets. He rattled home his first shot of the game-an in-rhythm, left-wing three off a dribble-handoff. It was decisive, and it was money.

the Immanuel Quickley I know and love pic.twitter.com/cArTWFvwDY

Next, he used a pump-fake to set up a floater (make), then eagerly hoisted a three on his next possession (miss). The next time he touched the ball, he took a quick step-back three (miss). Then, another floater (miss). Evidently, the confidence is back.

Overall, Quickley dropped 19 minutes on 7-for-15 shooting, including 3-for-6 from deep.

Quickley enters game and picks up right where he left off pic.twitter.com/oYZwbyOtTV

His most eye-opening move of the night may have been an off-the-dribble and-one finish.

play Immanuel Quickley as much as possible moving forward pic.twitter.com/nf5vFjD68L

Whatever his ceiling, Knicks fans should be ecstatic. IQ is far from a well-rounded offensive playmaker like McCollum and Williams, but he’s got the attitude and determination to self-assess and improve. And, he’s got the wingspan and smarts to wreak havoc on opposing guards, like Bradley.

Quickley’s up-and-down start serves as a useful reminder: nothing is more valuable than experience. At the moment, he’s holding his own as he adjusts his game to NBA speed. His brain and confidence are mostly there.