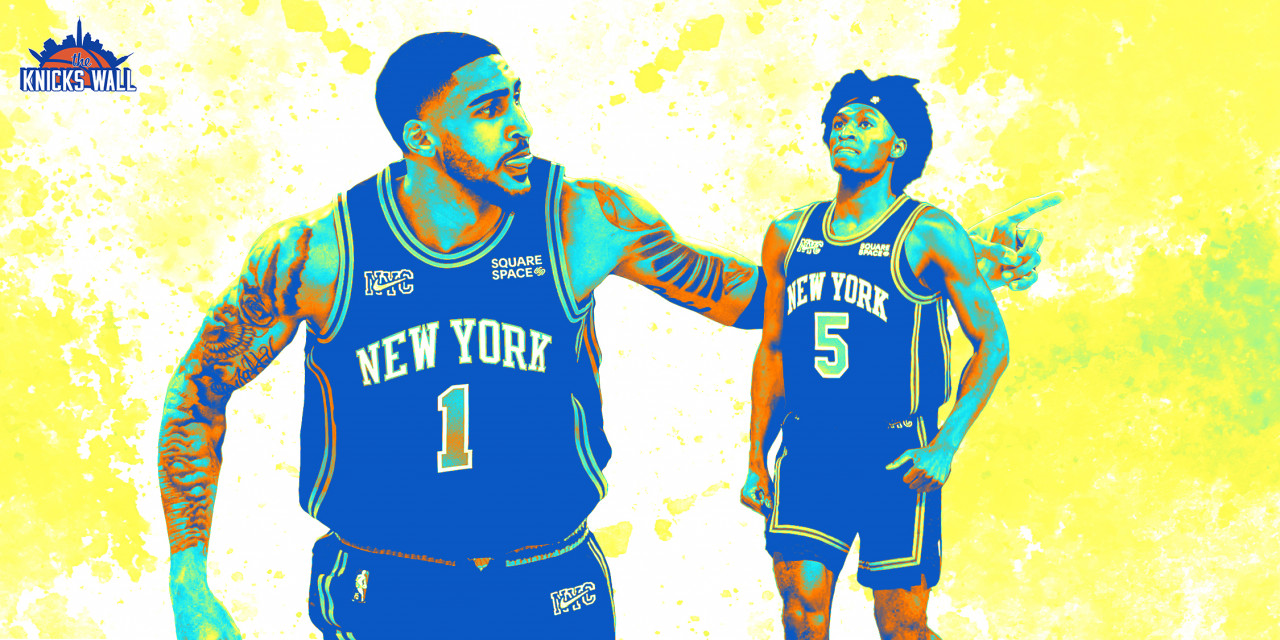 With the starting lineup proving inferior to the bench, it might be time to give the Knicks’ sophomores a bump up in the rotation.

The New York Knicks have had an up-and-down start to the season. Part of that is players going cold and not performing to their capabilities. The other part, however, is head coach Tom Thibodeau’s stubbornness to experiment with different lineups when the game calls for it. There are plenty of times when quirky combinations of players are working for the Knicks and getting results. The problem is that Thibs always seems to go back to the regular rotation upon the return to full health of the coach’s roster.

The Knicks’ starting five has played more time than any other starting five in the league with 287 minutes together (barely edging out the Phoenix Suns, that team on a 16-game winning streak). Of all the starting units in the NBA with at least 200 minutes of court time together, the Knicks have the worst Net Rating, -15.7—the only net-negative five-man unit there—and they also own the worst Offensive Rating, 103.3 of that bunch.

Thibs tends to play his starters the most in the first quarter and then spread them out throughout the game. Of the starting groups that have played more than 10 games this season, the Knicks are averaging the most with 7.4 minutes per first quarter. Something else that’s no secret is that the Knicks like to leave their starters out in the third quarter, and many times this season it has backfired on them.

Only the starters for the Golden State Warriors, Utah Jazz, and Portland Trail Blazers have played more games together in the third quarter than the Knicks, but the first two teams have much higher field goal percentages with 50.5% and 53.2%, respectively. New York’s field goal percentage drops way off from those two teams down to 41.3%. Suffice to say, the third quarter is not the time to shine for ‘Bockers starters.

The Knicks’ bench is their strongest asset, as they rank fourth in the NBA averaging 40.4 points per game. Thibodeau’s main reserve unit consists of Derrick Rose, Immanuel Quickley, Alec Burks, Taj Gibson, and Obi Toppin. Though they’ve only played 89 minutes, they consistently bring the Knicks back into games as highlighted on other occasions. However, the trigger isn’t pulled on them nearly enough. That group posts a better Defensive Rating than the starters at 84.2.

They are also the only combination of players that’s played together at least 10 games this season other than the starting five. They consistently clean up the mess on both sides of the court posting a NetRtg of 28.0. It’s quite easy to see that they should be playing a lot more. A couple of those bench pieces have missed some time, but when they’re healthy, they are very effective.

With the Knicks’ limited success this season, it’s probably not wise to be married to the same rotation like the head coach is. It would be a great benefit for Thibodeau to experiment with lineups because when his hand is forced and he has to get creative the team gets results. He doesn’t have to reinvent the wheel here, he just has to look at the numbers.

RJ Barrett plays well with the younger Knicks, especially Immanuel Quickley and Obi Toppin. In the very limited games that Barrett has played longer than five minutes with Quickley and Toppin, They scored a lot at an extremely efficient pace. The sample size is very small, but Barrett’s downhill style of play meshes well because with players that like to push the tempo. The starting lineup is more of a slowed-down, halfcourt set, which leaves Barrett standing in a corner a lot of the time.

IQ pushing ahead to RJ who gets to his floater and continues his strong night! pic.twitter.com/yV8huP1P7S

With the Knicks’ older players needing rest and dealing with injuries, namely Derrick Rose and Kemba Walker, the latter of whom won’t play many back-to-backs, Immanuel Quickley is surely to see much more playing time. IQ can be an instant offense for the Knicks off the bench, and with the lack of firepower coming from the starters, more Quickley might be exactly what they need.

The Knicks don’t really move around players in the lineup, they have two main groups the starting five and the main reserves mentioned before. But, of the five lineups that have scored at least 20 points together, Immanuel Quickley has been in three of them. All of those lineups are shooting at least 45% from the field and 40% from behind the three-point line. It’s no wonder the volume sharpshooting Immanuel Quickley is one of those players who can gel with any combination of players on the court. He has a Swiss Army knife quality about him because he’s able to step into multiple roles depending on who he’s sharing the court with.

The Knicks need to take advantage of their player combos and the success of their two-man game. An interesting pairing is Julius Randle and Obi Toppin, who make the most of their limited opportunities on the court together. Even though they have only played 49 minutes together across nine games, Randle-Toppin produces at an encouragingly high level.

With Randle’s playmaking ability and Toppin’s floor-stretching ability, especially pushing the fast break, the Knicks possess an 18.2 NetRtg and 61.9 True Shooting percentage when they’re on the court together. With more teams playing small ball, this can prove to be an unorthodox dynamic duo for the Knicks. Obi Toppin is a much more polished player in his sophomore campaign and deserving of more playing time, as he’s proven to be dependable; he hasn’t missed a game this year, unlike other backups at his positions.

There isn’t much variety when it comes to different lineups getting playing time on the Knicks, but if Thibs isn’t willing to make changes, the least he can do is distribute the minutes better. Immanuel Quickley and Obi Toppin are two of the more dynamic players on the Knicks, yet they stand 10th and 11th, respectively, in minutes played per game on the team. Down the stretch and in games where the Knicks have come from behind, they’ve certainly been catalysts more often than not. More playing time for the duo isn’t only warranted, it’s well deserved. The sooner the Knicks begins to trust in their investments, the better off they’ll be.