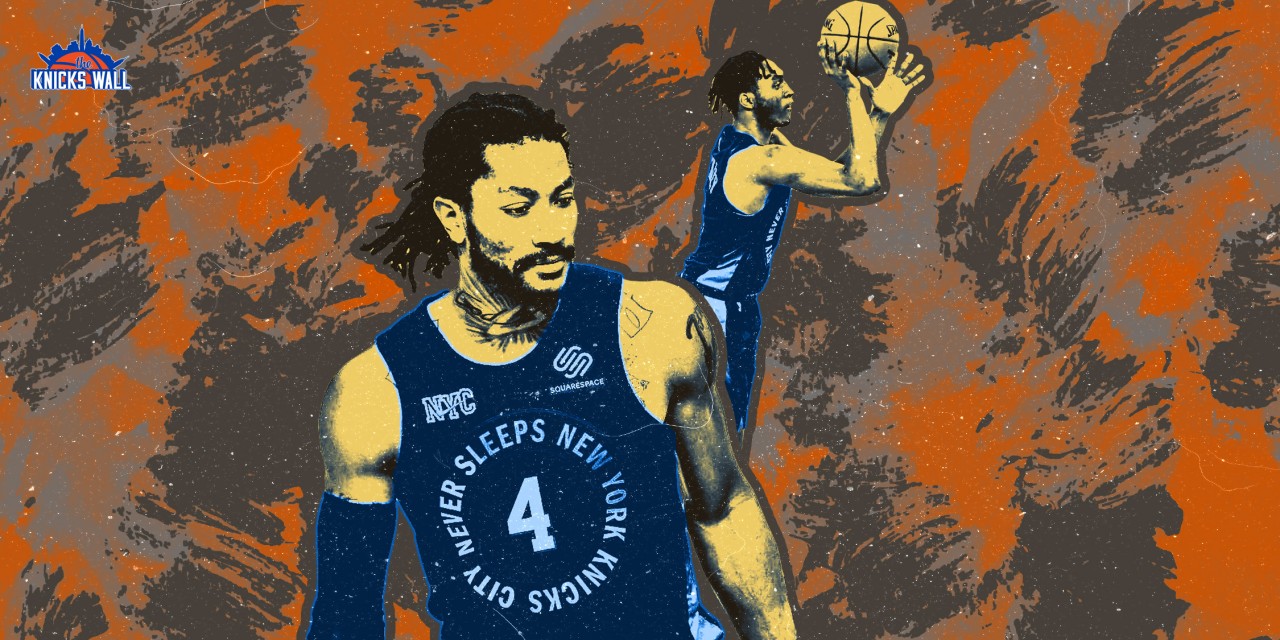 While Tom Thibodeau described the Immanuel Quickley, Derrick Rose backcourt as two point guards, the rookie’s development as a floor general is of utmost importance.

At first blush, the Derrick Rose trade was a bit confusing for the New York Knicks. The exchange came together quickly. New York was first rumored at the start of the week, talks of the trade progression happened on Saturday, and the trade was consummated and completed after Sunday’s game against the Miami Heat. The deal shifted from Rose to the compensation and whether giving up a 2021 second-round pick and Dennis Smith Jr. was worth a three-month rental or not.

The conversation turned to his play, where before joining the Knicks for his second stint, Rose averaged 14.2 points and 4.2 assists per game with a 51.7 True Shooting percentage. Where he’s evolved from his first stint in New York to now is as a creator. In the 2016–17 run, Rose had an assist rate of 21.6%, often looking for his own shot and looking past Carmelo Anthony and Kristaps Porzingis. Since then, Rose has assumed more of a bench role, and has sported an assist rate above 30% over the last three years.

In short, Rose was seen as an upgrade over current point guard Elfrid Payton.

My own concern shifted to Immanuel Quickley. The 25th overall pick from Kentucky went from an afterthought to one of the biggest surprises to start the regular season—using his outside shooting and impressive floater to win over Knicks fans and push for his inclusion in Tom Thibodeau’s rotation. Between adding Rose and keeping Payton, how would Thibodeau balance out the minutes to keep everyone happy, and what would that say about Quickley long-term?

The Knicks lost, but Derrick Rose returned & provided a much-needed spark off the bench.

We got a glimpse of what’s to come with Payton starting and Rose and Quickley coming off the bench. Quickley finished with 21 minutes to Rose’s 20 minutes, but Rose mainly assumed the lead guard role—pushing and dictating the offense. Quickley, often seen on-ball whenever on the floor, was delegated to an off-ball role, going 2-for-9 from the field with seven points and three assists.

If the first game says anything about this current iteration of the Knicks, it’s that Austin Rivers is out of the rotation, with Quickley moving off the ball and Rose slotting in as the backup point guard. The trio of Rose, Quickley, and Alec Burks of the bench gives Thibodeau a bit more firepower and a different dimension—driving—compared to Rivers’ shooting.

And ultimately, that’s fine for Quickley for the interim. Known as an elite shooter coming out of Kentucky, the former Wildcat has started off strongly in his first season (35.8% from three, 93.4% from the free-throw line) as a shooter. Playing off of a point guard or creator who can double as a distributor works because of Quickley’s shooting and apparent upside as a secondary creator.

When you zoom out just a bit, the idea makes sense: having another creator at the point guard position, Quickley as the second guard, and R.J. Barrett at a wing spot gives New York three positive ball-handling passers. Throw in Julius Randle, and the ball could whiz across the floor. Barrett and Randle use their ability to get downhill and rim to create open looks, while Quickley’s shooting can bend defenses and create passing lanes.

On the other hand, I can’t help but feel as if the Knicks are missing an opportunity to see if Quickley can man the position for the long term.

Despite averaging 5.2 assists per 36 minutes, Quickley has shown the ability to make the team better when he’s on the floor. The shooting and floater are well-known, but putting him on the floor for more high pick-and-roll chances would be wise. Getting the kinks out as a creator and as a scorer at the rim (8-of-15 in the restricted area, via NBA.com) would be more beneficial in the long run.

And Quickley began to receive some double teams and traps from opposing teams. Both the Heat and the Chicago Bulls threw double teams at him in the halfcourt instead of stifling New York’s offense. Quickley made good reads—simple quick passes out of the double—but could make better reads.

There’s also an impressive lead guard crop coming out in the 2021 NBA Draft, punctuated by Oklahoma State’s Cade Cunningham. The names are bountiful—Gonzaga’s Jalen Suggs, Tennessee’s Jaden Springer, Auburn’s Sharife Cooper, G League Ignite’s Daishen Nix, just to name a few. The Knicks, with two picks within the top 20, have a legitimate chance to find their point guard of the future.

New York should ultimately select a point guard come draft day regardless—too strong a class, even if a few of these guys go back to school—but not giving Quickley point guard reps falls under the same missed chance as not supplanting Barrett with proper spacing as a rookie. The Knicks will be fine, but it removes another element for a developing player.

My feelings for Rose’s off-court problems aside, the Knicks made a fine basketball trade. Rose improves New York’s ball-handler group and has chemistry with Thibodeau. To Rose’s credit, his first game back with the Knicks revealed a creator who looks for shooters and cutters, with Obi Toppin being the biggest beneficiary. The compensation on the deal is ultimately fine as well.

But one minor criticism is that Quickley, for the interim, is relegated to more of an off-ball role. SNY’s Ian Begley did report that a team does view Payton as a trade candidate, which would result in Quickley getting more time on the ball. However, until that happens, Quickley joins Rose in the backcourt and shares lead guard possessions, with Rose taking a healthy majority.

One of the Knicks’ best talking points has been the development of their young guys, with Barrett continuing to improve his all-around game and Mitchell Robinson solidifying himself as the team’s starting center. Immanuel Quickey’s position in the rotation has been assured, but playing as a lead guard and allowing him to succeed (or fail!) at the point guard spot could only help the Knicks moving forward.