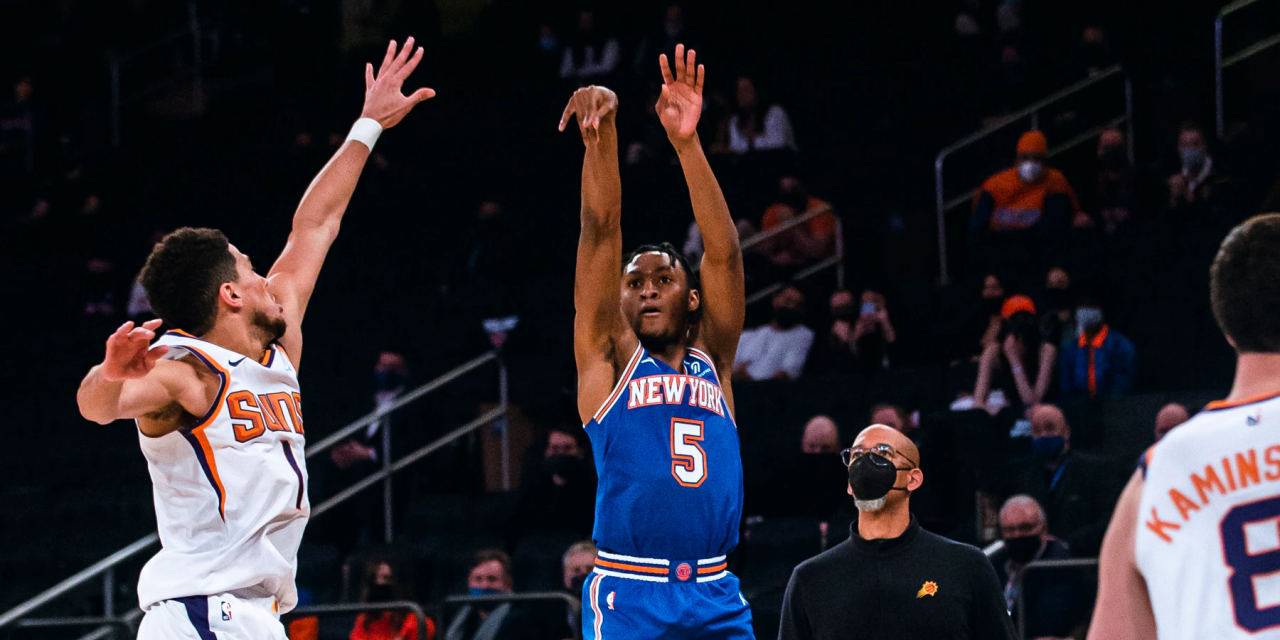 After shootaround on Sunday, Knicks rookie guard Immanuel Quickley spoke about how he’s encouraged to pull up from way downtown.

HOUSTON, TX — The New York Knicks have not known what it’s like to play meaningful games late in the season in recent memory. The portion of the regular season that usually only has implications for their upcoming draft pick (if they even had one) could now feature the Knicks clinching a playoff berth.

Tonight, the Knicks will kick off a six-game road trip with a matchup against the lowly Houston Rockets, who find themselves jockeying with the NBA’s other bottom feeders for favorable draft lottery odds. Before the 2020–21 season, it felt like the Knicks were stuck in that same situation for years—waking up to hear the same (sad) song on the radio over and over again, fighting for nothing but the top spot on Tankathon.com.

Several factors helped break the Knicks out of their Groundhog Day-like cycle, including the efforts of one of the most precocious neophytes of this rookie class, Immanuel Quickley. Rookies with gaudier box-score stats have better chances than Quickley does at winning Rookie of the Year honors, but having one of the best rookies in the class is a terrific asset for New York, especially considering there were 24 other players drafted ahead of him.

The 21-year-old Quickley has flashed veteran savvy all season long, putting defenders in difficult positions and draining deep triples. His 11.7 points per game rank fifth on the team and his 1.9 made threes per game rank fourth. According to Cleaning the Glass, the Knicks score 4.1 points more per 100 possessions with Quickley on the floor. Only All-Star Julius Randle is more impactful to the Knicks’ offensive efficiency.

Yesterday, Tom Thibodeau mentioned that the team uses a four-point line in practice and that Quickley utilizes it often and effectively. Following today’s pre-game shoot around, Quickley said that he has worked on long three-pointers since his time at the University of Kentucky and that the added point value from the shot in practice amplifies that.

As defenses figure Quickley out and look to take away his best shots, he’s figuring out ways to counter. He said that has he notices teams focusing on taking away his floater, “I’ve been more aggressive in pick-and-rolls, trying to get by the big…and also shoot that pocket three.”

Film work is a key part of how Quickley can better understand how to navigate defenses. “Looking at how I can attack different situations, whether it be a drop or whether the big be up,” he said. “Just wanna continue to watch film and see what I can get to on the floor and see how I can create for myself, create for my teammates.”

However, Quickley also understands the importance of the side of the ball in which Thibodeau specializes. “I watch a lot of film on defense ’cause the game is played on both ends and that’s gonna be a way I can stay on the floor—just continue to get better on defense as well,” he added.

There were minimal expectations for this team at the season’s start. Now, there’s no question that the Knicks are onto something under Thibodeau. As sole owners of the Eastern Conferences fourth seed and with two key players (Mitchell Robinson and Alec Burks) returning from absences soon, New York is gratified with where they are. But they’re not necessarily satisfied.

Quickley explained what the team does well, but stressed that they’re still looking to get better. “You can never be good enough. You just wanna continue to sharpen everything,” he said. “Offensively, we wanna continue to play the way we’ve been playing—sharing the ball, getting in the lane, creating for our teammates—and then defensively, I think we’ve been really good [with] ball pressure, help-side defense, talking, trusting each other.”

This away-from-home stretch is a testament to the Knicks’ toughness. They’ll face five teams in the playoff race before wrapping up their season with three home contests. The chance to clinch a playoff berth is on the line and it’s possible that they’ll need every advantage they can get as they run through a gauntlet of some of the Western Conference’s best teams. When they want some extra breathing room on offense, they know who to turn to.

IQ turned last night's game around in the first half with 17 big points and some great ball movement.

Don't worry if you missed it, @THalfCourtPress has you covered pic.twitter.com/cleVXRl647

Quickley’s ability to contribute to this winning brand of basketball right away is one of the brightest spots in a dream-come-true campaign in which so much has gone right for the Knicks. Effective point-guard play from the home team has been foreign to Madison Square Garden for a while. One player who was sought after to change that—Stephen Curry, who infamously was drafted one spot before the Knicks were on the clock in the 2009 draft—inspired the one who the Knicks were successfully able to draft.

Quickley said that Curry has always been his favorite player and that he’s also a fan of Damian Lillard. As he has grown up in the era that pushes the game further behind the arc, he recognizes the strain that deep-range shooters can put on a defense—not only in just making those shots, but how it opens up the floor more.

“The game is changing,” Quickley said, “and I’m just trying to take advantage of it.”