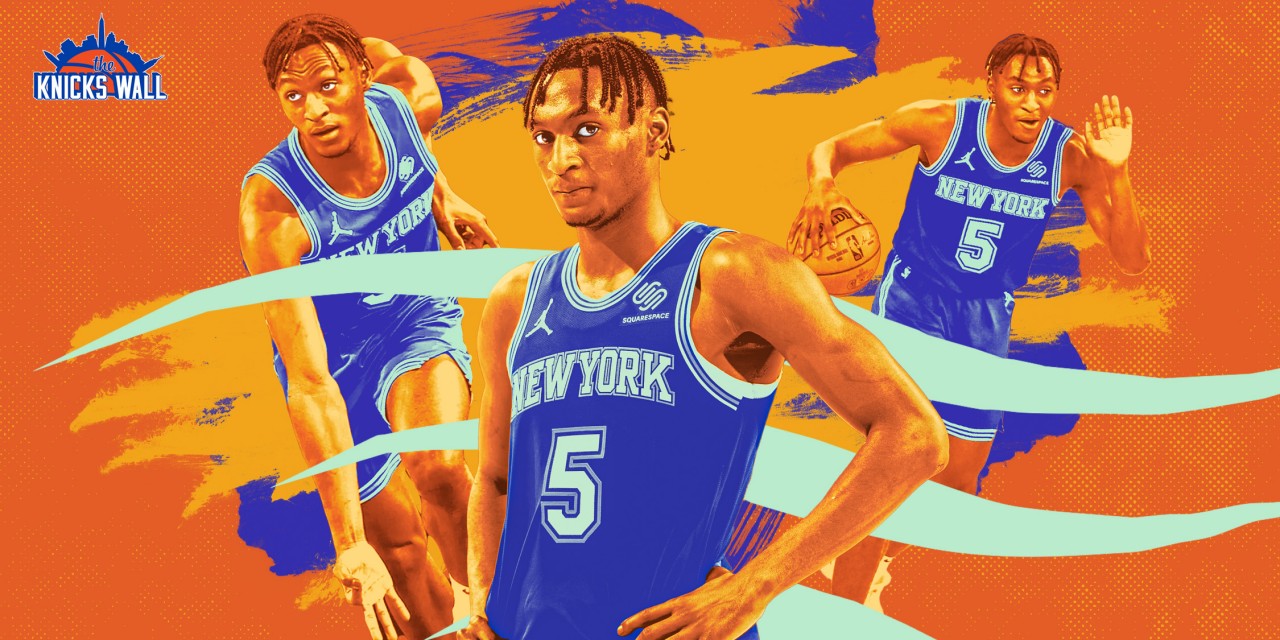 Immanuel Quickley is certainly offering one standout skill at point guard—shooting. However, there are still warts to be addressed.

Immanuel Quickley has been a revelation for the New York Knicks. The 25th overall pick out of Kentucky quickly emerged as a rotation player, made the best of his early-season chances, and turned into a key piece in New York’s future. The neophyte has averaged 12.7 points off the bench, 2.2 rebounds, 2.3 assists, and a True Shooting percentage of 55.5%.

He did miss the Orlando matchup with a sore left ankle, but other than that blip, Quickley came in and held his own as a starter.

Amongst the starters, Quickley’s best attribute, his outside shooting, shined. With Payton entrenched in the position all season, opposing defenses were capable of bearing down on Julius Randle and R.J. Barrett’s drives because they didn’t see a viable shooting threat on the outside. A 37.5% shooter from downtown, Quickley handled those extra looks well, thanks to the bit of space he had off this Randle drive. Payton, who, to his credit, gets these looks as well, isn’t comfortable making them as Quickley.

Here is Randle moving into the middle of the paint, and the entire Philadelphia defense collapses on him. Both Quickley and Reggie Bullock had open chances if Randle so choose. In this instance, he found the former Kentucky guard beyond the arc for an easy jumper. Again, Rose and Payton have received similar looks this season, but they are not the shooters Quickley has been so far.

One of the bigger concerns about Quickley as the starter is his passing. Averaging about 4.1 assists per 36 minutes and sporting an assist rate of 19.7%, Quick is more of a ball mover than a true creative hub on offense—think Patrick Beverley on the Los Angeles Clippers rather than Chris Paul on the Phoenix Suns. With Barrett and Randle out there, that isn’t much of an issue, as both players are heliocentric to the offense—with most players operating around them in secondary actions.

In a world where Thibodeau staggers the minutes between Randle and Barrett, Quickley will be an in-demand piece to play with both because of his ability to continue the positive offensive flow while also offering another shooter. Or, if they play together, Quickley’s shooting offers balance. As evidence by the trio’s performance this season—246 minutes, 114.1 Offensive Rating, 105.7 Defensive Rating, per NBA.com—these three players work well together and offer a future spine for Knick lineups.

That being said, I like that Quickley has been able to make basic reads and even some solid little quick passes. Off the steal here, the rookie gets the ball to the free throw line and, amidst confusion on the part of Philadelphia’s defense, gets a quick little pass off to an open Alec Burks for three. It won’t make SportsCenter or even be in his highlight reel, but that was a quality pass for an easy bucket.

With Rose recovering from COVID-19 and Payton on the way back, the question becomes: Did Immanuel Quickley do enough to maintain the starting job for the remainder of the season? From my point of view, Quickley would be the starter. However, I’m not sure he earned the role in the eyes of head coach Tom Thibodeau.

Thibodeau has already denoted him as a combo guard in the past, and he likes guards who can get to the basket now and then, despite three being worth more than two. Despite Quickley’s success on the floor, he has just 15 shots at the rim all season. Payton doesn’t have elite skills, but he’s fine at slipping to the basket now and then. That goes the same for Rose, who’s expected to bounce back well in the second unit.

Payton was quickly thrust into the starting lineup in the first game back, which is all you needed to know. With Payton back as the starter, Quickley came off the bench against the Washington Wizards, finishing with 14 points and 3-of-6 from the outside—providing a little highlight in New York’s 131-113 victory. As far as Payton starting, this could be one last showcase for the nine-year veteran before Thursday’s trade deadline, but time will tell.

Immanuel Quickley has been a successful player this season, regardless of role. Off the ball, Quickley has done an excellent job stitching the offensive together in stretches, be with his ability to shoot off the catch and his ability to maintain offensive fluidity. On the ball, despite sparingly playing the lead guard role at Kentucky, the neophyte has shown the ability to handle the pressure of being a point guard, despite not creating a ton of assists.

Moving forward, it’ll be interesting to see just how much the Knicks trust Quickley as a point guard. With a crucial offseason coming up, New York could come across a chance to upgrade the point guard position and the ultimate question of how to view Quickley moving forward. Regardless of the future, the week of Quickley starts did more good than bad for his future outlook, and it looks like the rookie could handle his own alongside New York’s cornerstone players.