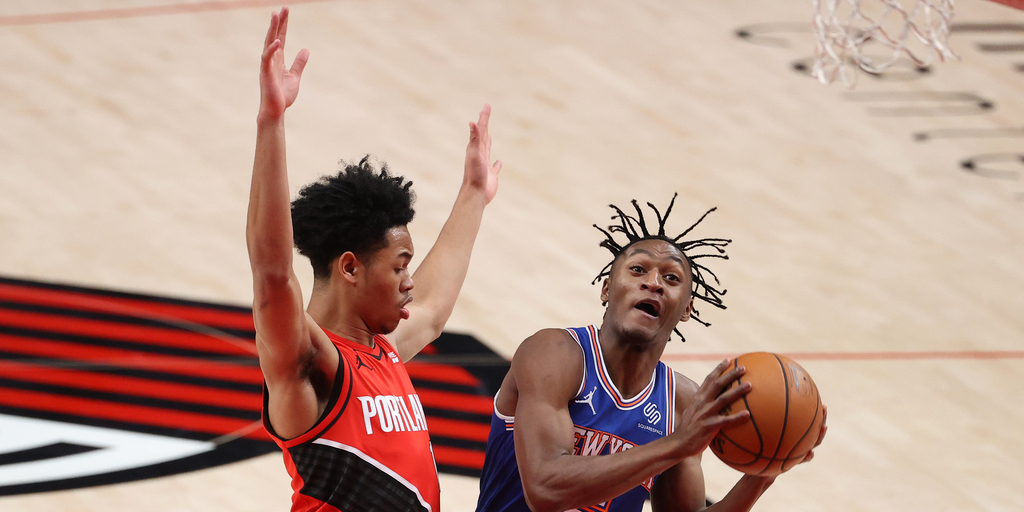 Knicks rookie Immanuel Quickley poured in a single-game career-high of 31 points off the bench as a late comeback fell short against the Blazers.

The New York Knicks (8-10) lost their second straight game on their West Coast road trip late on Sunday night in a bizarre back-and-forth game with the Portland Trail Blazers (9-6) with some truly remarkable performances. The Blazers were able to thwart a pesky second-half Knicks comeback after a disaster of a first half. A late Immanuel Quickley layup (much more on him throughout) cut the Knicks deficit to three, losing by a score of 116-113, covering the four-point spread in a game that many thought would be a blowout early in the first and second quarters.

The story of the first half was the Blazers’ unstoppable offense led by new father Damian Lillard. Lillard started “Dame Time” early, dominating the first quarter with a quick 15 points and four assists. He, along with Derrick Jones Jr.’s season-high of 10 points (just in the first quarter alone), led the Blazers to a 37-point opening salvo—the most the Knicks have allowed in any one quarter this season.

The second quarter continued with more of the first, with the Blazers hitting everything they threw up, shooting 58% from the field including 12 three-pointers in the first half. Portland extended their lead from 13 points after one to 20 points going into the half. The Knicks’ offense shot well from deep and scored a respectable 50 points in the first half, but they could just not stop the Blazers, who scored 70.

The start of the third quarter looked like it was going to be a long night for the Knicks as the Blazers ballooned their lead up to 25. Lillard continued his hot start, making his first eight shots from the field. This is where the Knicks made their run, though, cutting the lead in half based around strong defense and the shots that fell in the first half for the Blazers just not falling. After allowing 37 and 33 points in the first two quarters, the Knicks’ defense held the Blazers to just 19 in the third quarter.

Another impressive defensive quarter, which is becoming a trademark of this Knicks season brought it to just a 12-point deficit after three.

If things started to go the Knicks way in the third, the fourth could not have gone much better, barring a win, of course. The Knicks fought hard, but couldn’t ever get over the proverbial hump and Lillard was able to put it away with 39 points tonight. The Knicks were unable to catch a break with some weird foul calls and the Blazers shooting 21-of-23 from the charity stripe.

This was a fourth quarter where three minutes of game time taking over 26 minutes due to multiple reviews. There was a lot to talk about including weird coaching choices, but really, there is only one name worth mentioning: Immanuel Quickley. The Knicks’ 25th overall first-round pick this year went on an absolute tear, completely taking over the game in a way that would make Lillard proud.

The rookie & the vet pic.twitter.com/Du3oy975l2

Quickley was absolutely unconscious, scoring 21 points in the fourth, including hitting three from beyond the arc. Not only was the rookie creating his own shot and score from deep, but he showed a veteran-like presence and ability late in the game to, not only take care of the ball, but to draw fouls from out of nowhere and knock down free throws in crunch time. IQ finished with 31 points in total in just 24 minutes and certainly left his mark on an entire fanbase with an awe-inspiring fourth quarter, even if the comeback attempt came up just short.

IQ is IN HIS BAG pic.twitter.com/eGxWBWm9Xa

The Knicks finish their road trip in Utah on Tuesday night against one of the hottest teams in the NBA, the Jazz. This will be the last late-night game for East Coast Knicks fans with a 9 p.m. EST tip-off on Tuesday night.