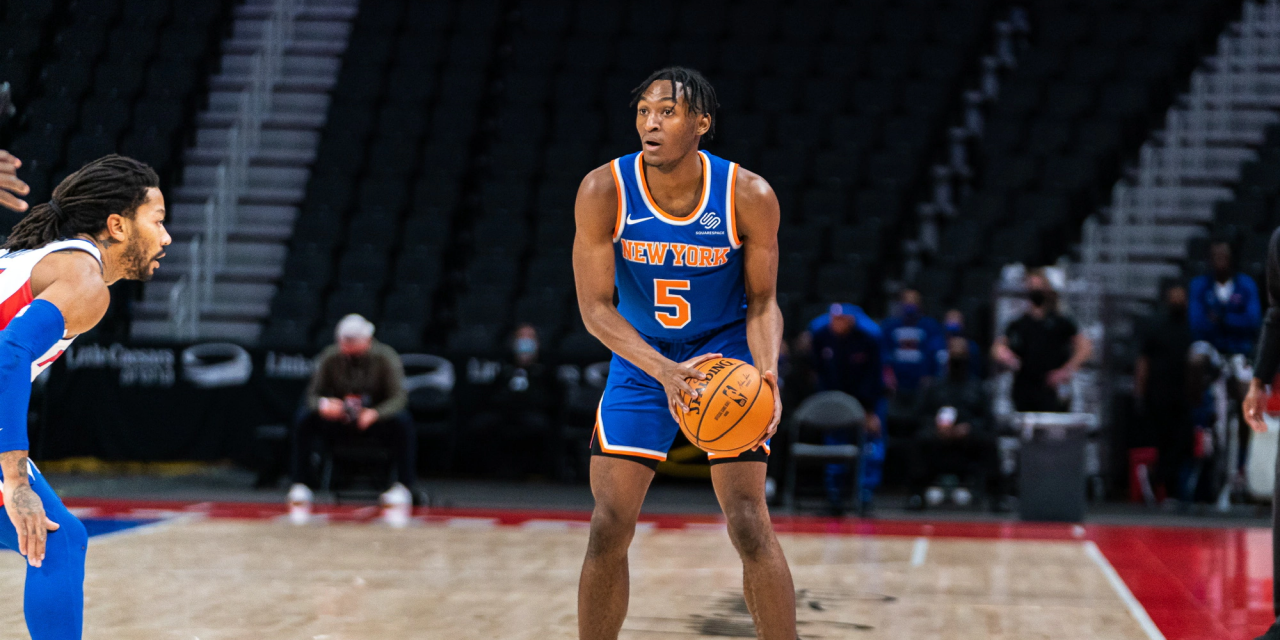 Knicks rookie guard Immanuel Quickley spoke after practice before the Heat game about his game and Derrick Rose joining the team.

MIAMI, FLA. — New York Knicks rookie guard Immanuel Quickley has not yet been thrown into the fire with a full-time starting gig in the backcourt, but he was prepared to answer for the imminent arrival of the newest Knick, Derrick Rose.

Rose, 32, was (re-)acquired by the Knicks on Sunday via trade with the Detroit Pistons, which saw New York send fourth-year guard Dennis Smith Jr. and a 2021 second-round pick (via Charlotte) to bring the one-time NBA MVP into the mix.

The 21-year-old Quickley called both himself and Rose “versatile player(s)” in case they end up sharing a backcourt. The first-year guard was quick to mention the similarities both he and Rose share in their path to the Association. “We both played for the same coach in college … and then Thibs.”

Rose played a single season at the University of Memphis during the waning years of John Calipari’s tenure. The first overall pick of the 2008 NBA Draft, Rose was selected by the Chicago Bulls, winning Rookie of the Year, and later MVP under Tom Thibodeau in 2010–11, Thibs’ first season in Chicago.

Meanwhile, Quickley played two seasons under Calipari at the University of Kentucky before the Knicks traded for his draft rights with the Oklahoma City Thunder at no. 25 last November. As a rookie, Quickley joined the Knicks for Thibodeau’s first season in charge of New York. Additionally, the Knicks brought along longtime Calipari assistant coach Kenny Payne to New York’s coaching staff.

Quickley is averaging 12.0 points, 2.3 rebounds, and 2.7 assists in just 18.9 minutes per game through his first 21 professional games. He has yet to make his first NBA start, and the acquisition of Rose complicates the once-clear projection of the rookie usurping the starting point-guard gig from veteran Elfrid Payton. Even Payton will have to contend for that role with Rose on board.

Rose’s reunion with both Thibodeau and the Knicks opens more questions, too. During his first stint with New York in 2016–17, Rose was first away from the club during a civil sexual-assault trial in Los Angeles. While Rose was found non-liable by the jury, the All-Star testified he didn’t know the definition of consent, along with how he “assumed” Jane Doe in the civil trial wanted sex. Per The Guardian: “I said we men. You can assume. Like we leaving to go over to someone’s house at 1 a.m., there’s nothing to talk about.”

A criminal investigation, filed in 2019, was rejected by the Los Angeles District Attorney last year, according to Stefan Bondy in the New York Daily News.

Rose again left the Knicks to attend a family matter, not contacting the team during a January 2017 game with the New Orleans Pelicans until after it ended. On the court, in the four seasons since playing for the Knicks, Rose has averaged 15.9 points and 4.2 assists in 24.5 minutes per game, shooting 47.5% from the field and 32.9% from three. Additionally, he sports a 28.9 usage percentage in the last four years. By contrast, this season Payton has a 22.1 USG% while Brooklyn Nets star point guard Kyrie Irving has a 28.0 USG%, per NBA.com.

Quickley added that Rose gave his phone number to the rookie over dinner last night, and he does not expect the former Pistons guard to play tonight in Miami. The Knicks are rematching with the Heat after losing to Jimmy Butler and Co. on Sunday at Madison Square Garden.

When Rose is inserted into Thibodeau’s rotation, whether starting or not, Quickley’s minutes and sense of chemistry with preexisting teammates will undoubtedly change. On Tuesday, Quickley spoke to how the coaching staff wants him to play. “They want me to be aggressive.” When his shot isn’t there, he added, “They want me to create for my teammates … at my best, I’m aggressive, [I] score first, then create for [my] teammates … be an all-around great player [and] help in any facet of the game.”

Quickley is ready to pick the brain of the aggressive guard with whom he shares a common path to the NBA and playing under Thibodeau. “Any time you can pick somebody’s brain who’s been through pretty much everything—playoffs, everything, as far as MVP … it’s always good to learn from somebody who has experience, that’s the best teacher. Just picking his brain as far as everything he’s been through, everything he knows about the game is something I’m looking forward to.”

The Knicks, at 11-14, play the Heat at 7:30 p.m. ET on Tuesday night. While Rose, for now, is not expected to play, it is worth keeping tabs on how Quickley will be impacted both on and off the court by the new acquisition.

»READ: The Knicks may have found their own ‘core four’