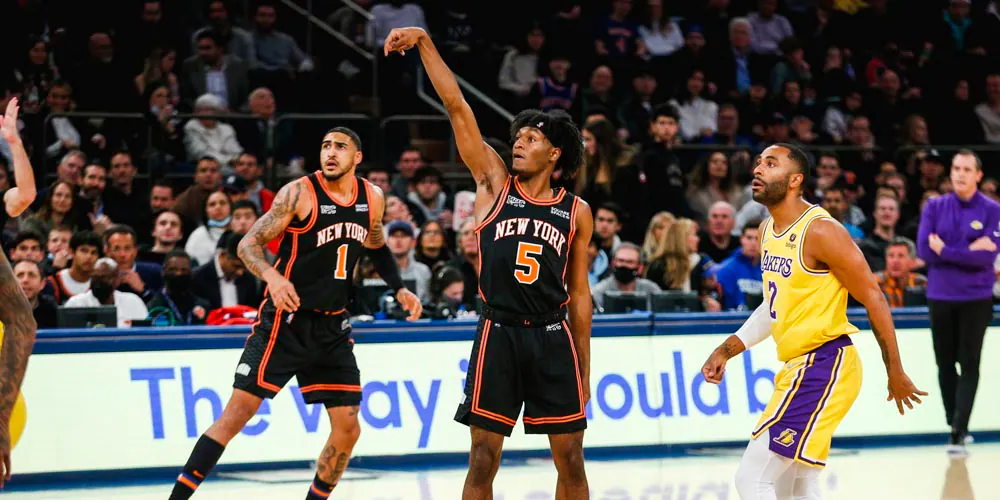 The Knicks handled the Lakers without LeBron James, as hot shooting from Immanuel Quickley stole the show at the Garden.

The New York Knicks (10-8) defeated the Los Angeles Lakers (9-10) by a score of 106-100 thanks to another solid game from All-Star Julius Randle and some late-game heroics from Knicks sophomore guard Immanuel Quickley. While turnovers and stagnation from the Knicks’ starting unit looked like they could be New York’s downfall, they were able to walk away with a win against an undermanned (and underperforming) Lakers squad.

The Knicks were coming into this game against the Lakers having dropped seven of their last 11 and sporting a home record of 4-5; a slow start to home-court dominance that we have grown to love rooting for New York in Madison Square Garden.

As for the Lakers, they were playing without LeBron James, who was ejected from their last game against the Detroit Pistons after getting into a scuffle with Isaiah Stewart. Both they and the Knicks have started slow to begin this season with high expectations, so a win was big for either club to start trending in the right direction.

The first quarter was a shooting barrage from New York. They shot 54% from three and 60% from the field to get things going. That gave the starters much more spacing to work which allowed Julius Randle to thrive early on. Randle had 10 points and six rebounds in just 12 minutes of play. Evan Fournier and RJ Barrett finally broke out of their respective slumps, scoring 11 and nine points, respectively.

In the second quarter, head coach Tom Thibodeau stuck with Randle, but inserted bench players to support him, including neophyte Quentin Grimes (zero points, five minutes). They were gritty defensively against the depleted Lakers squad, and Burks was a very active primary ball-handler off the bench as Derrick Rose sat out with an ankle injury. On a night without Mitchell Robinson and Taj Gibson available at the 5, Obi Toppin played eight first-half minutes. He had six points, a steal, and a block to wrap up the first quarter.

However, the Lakers finally found their shooting stroke as well as their defensive intensity and outscored the Knicks 31-26 in the second quarter. Their top player at the half was Anthony Davis, who scored 11 points on 4-of-9 shooting in 15 minutes.

The Knicks’ starters had to come out in the third quarter with better defense than they finished the second quarter with, and they had to get their ball movement going again to try and make another run. However, the Lakers continued a run of their own and got within seven points of the Knicks’ lead to start the second half. Poor defensive decisions and a lack of cohesiveness on the offensive end against the Lakers’ zone defense caused stagnation amongst the starters who had come out swinging just two quarters ago.

The bench, along with Randle, ended the third quarter, and the Knicks were evened up after being outscored 30-20 in the period. Coach Thibodeau decided to go with a small-ball lineup of Toppin and Randle after Noel picked up his third personal foul following a badly missed layup that would have put the Knicks up by five.

The fourth quarter started off with a bang as the tandem of Toppin and Quickley both contributed much-needed points and flow to the Knicks. Foul trouble forced Randle to sit and Noel to come back in at center for New York, but Noel continued to struggle to finish at the rim. Despite this, the Knicks led by the red-hot Quickley ran away against the Lakers’ struggling offense. Quickley finished the night with 14 points on 4-for-8 shooting from three as well as three rebounds and three assists.

Toppin, who continues to show his growth this year, had the best plus/minus of the Knicks, +15, with 12 points and four rebounds in 22 minutes. Alec Burks also contributed nicely off the bench with 12 points of his own along with six rebounds and three assists.

The starters had a very solid outing tonight. Evan Fournier was electric from downtown with six three-pointers on nine attempts and finished up with 26 points. Julius Randle had a double-double on 7-of-17 shooting from the field. Randle had an eye-popping 16 rebounds and 20 points.  Nerlens Noel did the best he could do being the Knicks’ only center available and had four points and seven rebounds on 2-of-7 shooting.

Kemba Walker struggled tonight, only hitting two shots from the field on six attempts with two turnovers and five assists. RJ Barrett was quiet tonight with some early signs of life from three to start this game. He finished with 12 points, seven rebounds, and went 3-for-5 from deep.

The Knicks’ next challenge on this upcoming slate of tough games is against the Phoenix Suns at home this Friday night. The Suns will be coming off their 13th straight win against the San Antonio Spurs, and New York will be trying to act as spoilers against Phoenix.

»READ: Fixing the Knicks’ defense troubles starts with getting their bigs back into form