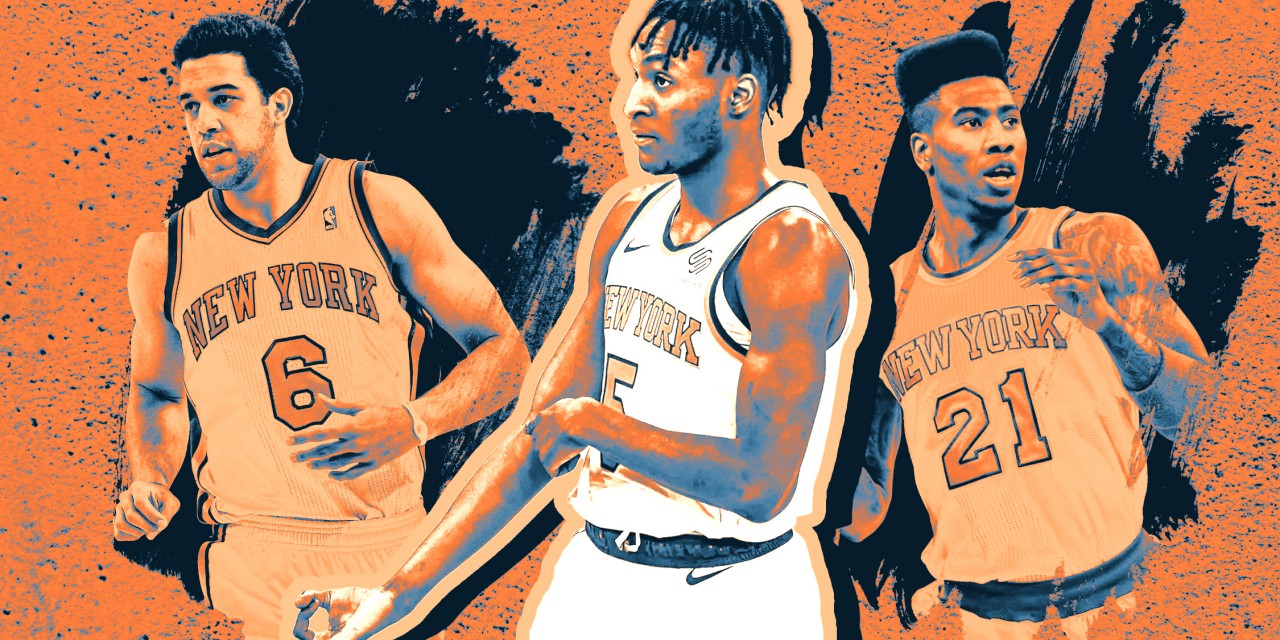 Immanuel Quickley is putting the finishing touches on a great debut season. Where does his season rank among Knicks rookie seasons since 2010?

When the New York Knicks traded down in the 2020 NBA Draft to select Immanuel Quickley, the reaction from the media was negative. We’ve all seen the infamous CBS Sports grade for the pick, a D+, which has now turned into a meme, but they weren’t the only ones who criticized the pick. Draft Twitter, as well as big media networks, saw Quickley as a mid-second-round pick.

The thought process was that New York was leaning on their University of Kentucky ties. Between Randle and Kevin Knox already on the roster, the selection of Quickley, and the signing of Nerlens Noel and training camp invitee Michael Kidd-Gilchrist, the Knicks were seen as a Kentucky outfit. Hiring Kenny Payne, the associate head coach at Kentucky from 2014–20, strengthened that thought process.

It turns out, Quickley ended up being a lot more than just a shooter and a Kentucky pick, flourishing into a bench-scoring role on this Knicks team that’s currently 38-31, sixth in the Eastern Conference. His importance to the team is immeasurable, as his absence against the Suns, Clippers, and Lakers left New York with limited scoring options on the bench, and it showed.

As a result of Quickley’s success, I went back and ranked the top 10 Knicks rookies since 2010 to see where he’d rank on the list. To be clear, this is strictly based on rookie season, not the aftermath! This was a fun exercise, as it is sure to bring back several Knicks memories, some bad, some good.

To start, I listed some players that missed the cut of the top 10 by a decent margin. The most notable name on here is Frank Ntilkina, who remains on the roster and is currently the longest-tenured Knick. While Ntilikina showed flashes in his rookie season, he only averaged 5.9 points and 3.2 assists per game, which isn’t good enough to make this list.

You can make the argument that Trier deserves to be in the top 10. After signing with New York as an undrafted free agent in 2018–19, he averaged 10.9 points in just 22.8 minutes per game while shooting 44.8% from the field and 39.4% from three. His exclusion from the top 10 is because he benefitted from being on a team that went 17-65. He was also a liability defensively and ultimately a one-trick pony, which is why he came off the bench and then eventually was cut by the Knicks a season later.

Another player in a similar situation as Trier was Langston Galloway, who was undrafted in 2014. Galloway played in the then-D-League before ultimately appearing in 45 games for the Knicks, 41 of whom he started. Galloway averaged 11.8 points in 32.4 minutes per game and shot 35% from outside. Ironically, the Knicks also went 17-65 during the 2014–15 season, which pushed Galloway off the list. He, like Trier, benefitted from getting more shots up on a bad roster.

A month ago, it would’ve been crazy to include Toppin in the top 10. That being said, while it may not show up as much on the stat sheet, Toppin has been a great piece for this Knicks bench as of late. His shooting, defense, confidence, and feel for the game have improved tremendously to the point where it’s possible that we could be looking at a big Toppin jump from this season to next.

Focusing on this season alone, Toppin only averaged 4.1 points and 2.3 rebounds while shooting 48.8% from the field and 29.3% from three. Context matters when evaluating rookies. Over the eight games, Toppin is averaging 5.6 points while shooting 40% from three in 12.1 minutes per game. The improvement has been clear for him and with a full offseason, possibly Summer League, and a full preseason, Toppin could emerge as a key bench piece for the 2021–22 Knicks.

One of the toughest players to evaluate on this entire list was Kevin Knox. In 2018–19, Knox was widely ridiculed for having one of the least efficient rookie seasons in the league’s history. It’s also worth noting that Knox was placed in a more difficult situation than anyone on this list and that 100% matters.

Asked to be the second option right away, Knox struggled. He averaged 12.8 points on 37% from the floor. The 34.3% from three alluded to his potential as a shooter, but it never materialized. David Fizdale threw Knox right into the fire, something he wasn’t ready for as an 18-year-old rookie. Still, Knox had moments of success, including five games where he scored 24 points or more.

Ultimately, Knox’s rookie season was brutally mishandled and probably misunderstood as well. Ninth on this list was an appropriate spot for his rookie campaign.

One of the more forgotten rookie seasons, Willy Hernangómez was solid for the Knicks, averaging 8.2 points and 7.0 rebounds in just 18.4 minutes per game during the 2016–17 season. He falls into the number eight spot due to his quick departure from New York—shipped out midway through his second season to Charlotte for two second-round picks.

Hernangómez’s stint with the Knicks is short, he should receive some credit for a solid rookie campaign. Averaging 16 points and 13.6 rebounds per 36 minutes is no joke, even if you’re nonexistent defensively. This team also won 31 games, which isn’t that bad compared to some of what we’ve since over the past decade.

Tim Hardaway Jr.’s rookie season with the Knicks came at the beginning of a massive decline for the franchise. In 2013–14, New York went 37-45, missing the playoffs the season after going 54-28. While this was a brutal season with Amar’e Stoudemire in decline and a regrettable trade for Andrea Bargnani during the offseason manifesting into poor play, Hardaway Jr. was a bright spot.

Hardaway averaged 10.2 points in 23.1 minutes per game, shooting 36.3% from beyond the arc on 4.4 attempts per game. His play during his rookie season was good enough to earn him a spot on the All-Rookie First Team. Unfortunately, this good rookie season by Hardaway Jr. meant nothing after a slight decline the following season led to the Knicks dealing him for Jerian Grant.

Robinson is the first player on this list that appeared to be a clear hit from day one. An All-American in high school who opted out of playing at Western Kentucky, Robinson fell all the way to the second round. Robinson averaged 7.3 points, 6.4 rebounds, and 2.4 blocks in just 20.6 minutes per game, earning him All-Rookie Second Team honors.

With Robinson’s insane blocks and alley-oops, he became the first building block of all the young guys on the current roster. However, with recent injuries and the emergence of Nerlens Noel, the Knicks will enter this summer with the ability to extend Robinson for the foreseeable future. Whether the Knicks or even Robinson wants to extend the relationship remains to be seen.

A fan-favorite for his cool persona and the creation of #KnicksTape, Shumpert burst onto the scene in 2011–12, scoring in double figures in his first seven games for the Knicks. Given his size, athleticism, and defense, Shumpert became a key contributor for a Knicks team that finished 36-30 and registered the fifth-best defense in the league. With Shumpert and Tyson Chandler, the Knicks slowly found good defenders to supply around offensive force Carmelo Anthony.

As a rookie, Shumpert averaged 9.5 points, 2.8 assists, and 3.2 rebounds in 28.9 minutes per game. As a result, he made the All-Rookie First Team. Tearing his ACL in the playoffs, Shumpert returned to the Knicks in 2013 as a 3-and-D contributor off the bench. Despite a great rookie season, Shumpert never took off as the Knicks envisioned, and thus, he was traded to Cleveland with J.R. Smith in a three-team trade.

There’s no question that these good Knicks teams in the early 2010s wouldn’t have been the same without Shumpert’s energy.

When you think about the Knicks renaissance from the mid-to-late 2000s, it starts with names like Carmelo Anthony, Amar’e Stoudemire, Tyson Chandler, and even Raymond Felton. But you also have to consider that group that started it all; Wilson Chandler, Danilo Gallinari, Ronny Turiaf, and Landry Fields. The former Stanford swingman played an instrumental role on that 2010–11 team.

As a rookie second-round pick, Fields averaged 9.7 points per game while shooting 39.3% from deep for a Knicks team that went 42-40 and made the playoffs. He also was great defensively and played in all 82 games, starting in 81 of them. That season landed Fields on the All-Rookie First Team alongside a cast of future All-Stars: John Wall, DeMarcus Cousins, and Blake Griffin.

Fields had a weird career arc; on the Knicks for two seasons, before the Raptors snatched him up, Fields was out of the league after five seasons and currently sits in the Atlanta Hawks’ front office assistant general manager. Mind-boggling. What actually happened is hard to determine, but 2010–11 lands him at fourth on the list.

In a situation similar to Knox, Barrett was thrown into the fire as the second option immediately on a team that didn’t fit with his scoring abilities. As a result, Barrett struggled as a rookie, shooting 40.2% from the field, 32.0% from three, and 61.4% from the line. That being said, he still averaged 14.3 points, 5.0 rebounds, and 2.6 assists and had many moments that made you think he could be a franchise cornerstone.

Drafted behind Zion Williamson and Ja Morant, it created an expectation that Barrett couldn’t overcome. With several offensive players looking for their own shots, a poor coaching situation, and an ideal lack of shooting around, Barrett didn’t do him favors, resulting in Barrett being left off the All-Rookie Second Team last season. It’s safe to say that motivated him in his sophomore season.

Overall, Barrett is tough to rank, as he could be anywhere from three to six on his list. With the flashes of potential, he showed and truly understanding his situation a lot better than we did during his rookie year, I gave him the benefit of the doubt here.

Averaging 11.7 points in 19.6 minutes off the bench, Quickley gives New York a special offensive talent. His ability to space the floor—39.7% from the outside—has given New York another element in its offense compared to current starter Elfrid Payton. Payton operates as a creator for others; Quickley offers a secondary ball-handler, who can also space the floor with an array of off-the-dribble and spot-up shooting.

At this point, Quickley should be a shoo-in on the All-Rookie First Team, but what’s more uncertain is his upside. Despite improving as a driver, he still has issues scoring at the rim, and his ability as a point guard leaves much to be desired. That being said, there’s no reason to doubt Quickley’s ability to be a solid scorer and contributor moving forward, based on how important he is to this year’s Knicks team.

When Adam Silver uttered Kristaps Porzingis during the 2015 NBA Draft, boos were rained as fans were furious with the pick. Deemed a project, Porzingis became an instant contributor, averaging 14.3 points, 7.3 rebounds, and 1.9 blocks in 72 games. Porzingis was quickly given the name “The Unicorn” thanks to his ability to defend the rim and move on defense while also offering elite shooting from the outside.

Porzingis was then thought of as the franchise’s savior before ultimately tearing his ACL and being traded to Dallas before playing another game by the franchise. As New York sits one win away before clinching their first playoff berth since 2013, it looks like the trade will work out for New York. Still, it doesn’t change how impressive Porzingis’s rookie year was, as he was clearly was the best Knicks rookie since 2010.