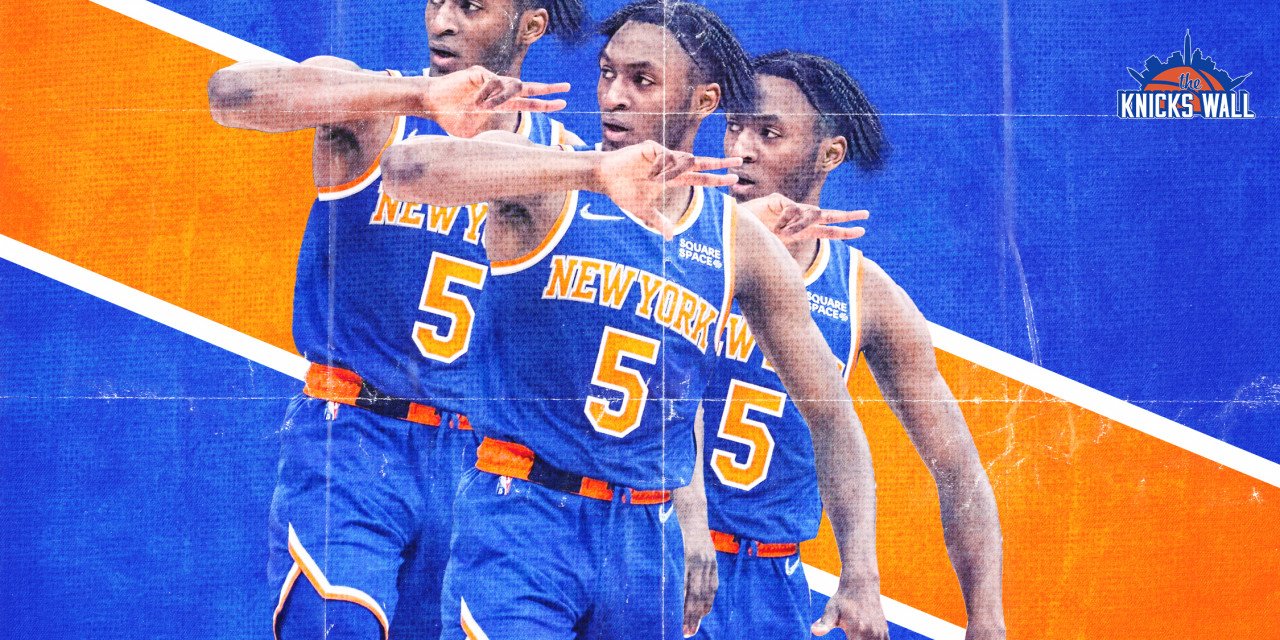 As the Knicks begin to hit somewhat of a stride, Immanuel Quickley seems to have rediscovered what made him a fan favorite last season.

As expectations for the New York Knicks this season were set high, so were those of second-year guard Immanuel Quickley. A steal in the 2020 NBA Draft at the 25th pick, Quickley gained favor early in Tom Thibodeau’s rotation for his extended three-point range and dexterity with the ball in his hands. After a rookie year averaging 11.4 points on 39% from beyond the arc, there was every reason for the stud to replicate and go above and beyond those numbers in year two.

For the majority of this season, though, Quickley has looked like a shell of himself. Prior to the All-Star break, he was averaging two points fewer per game at 9.4 and shooting a poor 32.8% from three-point range. He appeared highly timid with the ball in his hands, unsure of whether to pull the trigger on shots or drives he was comfortable with last season.

The floater, a shot that promptly became a staple of his game, for example, has mostly gone by the wayside. Last season, his second most-attempted shot type was the floater, on which he made over 42% of his attempts. While his shooting percentage on that shot has remained about the same this year, he’s only taken it on about 20% of his shots prior to the All-Star break.

The most worrisome decline in his game has obviously been the shoddy three-point shooting. Like aforementioned, Quickley has only been hitting 32.8% of his three-pointers before the All-Star break, down over six percent from his rookie season. Shots from the arc extended that he would shoot with ease last season are now met with discernment, and he’ll often pass the ball out of situations in which he is wide open out of wonder that there might be a better play at hand.

The good news for Knicks fans, as the team is quietly saving grace in the last quarter of the season, is that Quickley seems to have refound himself in just about every aspect of his game. Since the All-Star break, he is averaging 15 points before yesterday’s game against Brooklyn on a blistering 42.9% from three-point range.

Aside from rediscovering his stroke beyond the arc, Quickley is showing more efficiency inside the paint than ever. As good as his extended shooting has been, the most shots taken of his since the All-Star break have actually been on those floaters. He’s made 55% of them and is getting to the free-throw line more than ever for when they don’t fall. He’s nearly doubled his attempts from last year at 4.5 per game during this stretch and is hitting his free throws at a 91.7% clip.

Aside from his shooting, Quickley is more shrewd when it comes to making the right passes and ensuring an offensive possession ends in a bucket. He’s averaging over three assists per game in this stretch, including two separate outings with six. He’s also been impressively grabbing down over five rebounds a game, with three games at six or more and one at 10. This has all led to him having an Offensive Rating of 111.8 during this stretch, slightly higher than his number of 111.6 held last season.

An added bonus on top of all this is the improved defense Quickley has shown all year long and was the only noticeable improvement from last season at the jump. His on-ball tenacity has become apparent, and he’s one of the players head coach Tom Thibodeau trusts most when guarding other teams’ top guns. On the season, Quickley has the third-best Defensive Rating of Knicks to play more than half the season at 104.4. He’s continued to help himself in that regard during this recent stretch, recording a steal in all games but one since the All-Star break.

With his resurgence, Quickley has been a merchant atop this Knicks comeback and is seeing more minutes than ever. While Thibodeau continues to strictly stick to his starting lineup featuring Evan Fournier at the two-guard spot, Quickley is the one closing out games in his place. He’s playing more than 26 minutes per game in this stretch, with over 30 in three of his last four games.

QUICK RATTLES IN THE 3!!! pic.twitter.com/B9D3GQMMZ1

As the Knicks continue on this nice run of theirs as winners of three of their last five games, Quickley’s role should only grow more as the season draws toward its conclusion. As long as he continues to play like he has been, the results should only become more and more positive. With this season’s hopes mostly in the dirt and many questions about the backcourt to be addressed this offseason, the front office can be assured that Quickley is definitely a fundamental piece for the success of this team.

Could he be the Knicks’ starting point guard of the future, though? Well…that’s a question for another day.