In Tale of Two Halves, Knicks Fall Short in L.A. vs. Lakers (OT) 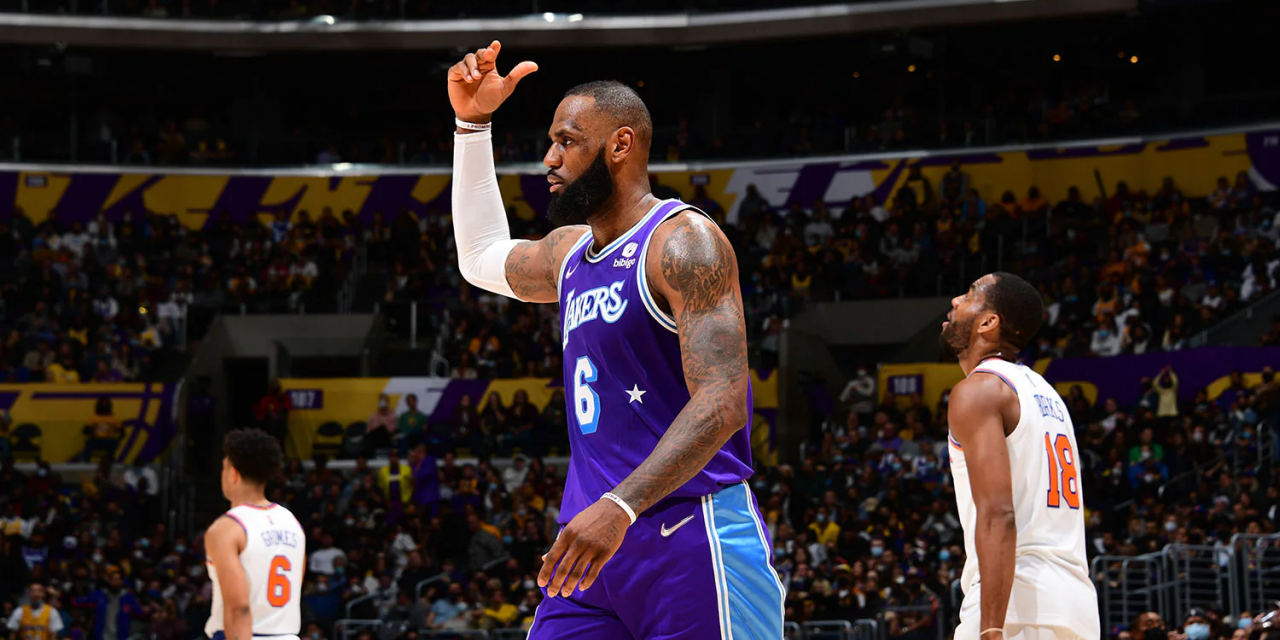 A 21-point lead disintegrated for the Knicks, and despite a valiant push to overtime, they fell to LeBron James and the Lakers in the first game of a five-contest road trip out west.

In an emotional roller coaster of a game, the New York Knicks (24-29) squandered a 21-point first-half lead before erasing a seven-point deficit in the final 77 seconds to force overtime. However, New York fell short of the Los Angeles Lakers (25-27), losing 122-115.

The Knicks got off to the best start possible on their five-game west coast swing as a stout New York defense forced the Lakers into turnovers on each of their first two possessions, both of which resulted in wide-open threes courtesy of RJ Barrett and Evan Fournier.

The Knicks started the game off 9-for-10 from the field, including a Kemba Walker three-pointer, which ended his streak of nine consecutive scoreless quarters, with eight of those buckets being assisted.

Barrett and Julius Randle powered the Knicks to a 42-point first quarter, their highest this season, with Barrett scoring 17 points on 6-for-7 shooting and 3-for-4 from three while Randle set the tempo and effort level for his team with a 12-point, five-rebound, and four-assist first period.

New York lost their sharpness defensively late in the period, conceding five layups in six possessions over the final three minutes of the first, with miscommunications and lackluster effort being the cause. The bench failed to match the intensity of the first five.

The lack of focus continued into the second quarter as New York was in the penalty with 8:44 remaining in the period as Immanuel Quickley’s foul woes continued, committing three personals in five minutes (he would not appear after halftime). Nerlens Noel added to this struggle as he was four steps slow in seven minutes and change of action, being late on multiple rotations and out of position consistently.

The Knicks’ offense was more grind-it-out early in the second frame as Alec Burks kept the scoreboard ticking over by way of a three-pointer and adding another four points at the free throw line before the starters were reinserted into the game.

It was again the Lucky Lefties who propelled New York. Barrett added another four points and two assists, including pair of fantastic drives while Randle added eight points late in the piece, capped off by a powerful fast-break slam and long-range bomb. Both players ended the half with 20 plus points and combined for 41 points on 15-for-26 shooting, 11 rebounds, and 10 assists through 24 minutes of action.

We gave them 71 first half points at Crypto 😂 pic.twitter.com/JEyExrfab5

The Knicks went away from what worked to open the third period and their 15-point advantage swiftly disappeared. Defensively, the effort and communication were absent resulting in four layups and uncontested threes as L.A. went 6-for-11 in the quarter with Malik Monk doing most of the damage, tallying 18 points.

On offense, any form of pace and ball movement evaporated as New York went into isolation-heavy basketball. Randle opened the period 1-for-5—many of which were contested—off-balance jump shots as Barrett suffered much the same fate, going just 1-for-4 as the Knicks scored just 13 points in the worrying third quarter.

After 17 assists and six turnovers in the first half, New York was out of sorts following the break, adding only one assist to their tally while turning the ball over on four occasions in the 12 minutes following intermission.

The painted area was New York’s only source of offense to begin the final quarter as Noel, Burks, and Barrett each converted a layup to put much-needed points on the board; however, LeBron James just LeBron’d and there wasn’t much Barrett could do about it as James hit three tough shots to pace the Lakers.

The Knicks went ice-cold in the second half, missing their first 12 three-point attempts of the second half after opening the game 9-for-20 from distance. New York was unable to generate the high-quality looks they were getting early in the game.

The Knicks trailed by seven points with little over a minute to play and it was RJ Barrett who stepped up when it counted. Barrett scored 11 points in the fourth quarter including a dunk past Russell Westbrook and Anthony Davis and the game-tying three-pointer with 8.1 left on the clock. New York accumulated enough stops and with the Lakers suffering Knick-itis from the free throw line saw the game knotted at 111 after 48 minutes of play.

Tom Thibodeau elected to play without a point guard for the last 15 minutes of regulation and went the same way to begin overtime.

The free basketball was mistake-ridden for the Knicks as Evan Fournier saved what would have been Knick ball to LeBron James for a dunk while Burks botched a critical inbounds pass with half a minute on the clock again leading to a dunk.

The offense was out of sorts, going scoreless before Randle broke the drought with 2:40 to play. He scored New York’s only other field goal of the extra period as the Knicks went just 2-for-9 while Los Angeles went 5-for-8 in the period, edging away in the end.

The first half from Julius Randle was what we expected coming into the year. It was how he played last season. Randle was playing flat out, all gas and no brakes. He was crashing the defensive glass, pushing the ball up the floor and making fast decisions both in terms of his passes and when shooting. We will all keep screaming it from rooftops, but this is how he and the Knicks will be successful. The second half of contested jumpers and over-dribbling is how the Knicks will keep sliding.

Nerlens Noel is bad. Whenever he has been available, most of his minutes have not been pretty. The rim protection has been down compared to last season, he is gambling too much, and the team pays the price. Add to that, he simply cannot catch a basketball to save his life. It would be preferable if he wasn’t here after the trade deadline.

I can’t do it anymore with Nerlens. Soaking your hands in melted butter is not a winning pregame routine pic.twitter.com/jeRvf913Ur

The Knicks played the first half at a frenetic pace, but it was largely done under control. New York forced eight Laker turnovers for 16 points and had 19 fast-break points through two quarters. As a result, the Knicks scored 71 first-half points, their best output of the season. Conversely, in the second half, the pace slowed to a dawdle and the Knicks had six points on the break and scored 44 total points in the following 29 minutes.

The Knicks are in Utah on Monday for the front end of a back-to-back before playing in Denver on Tuesday.