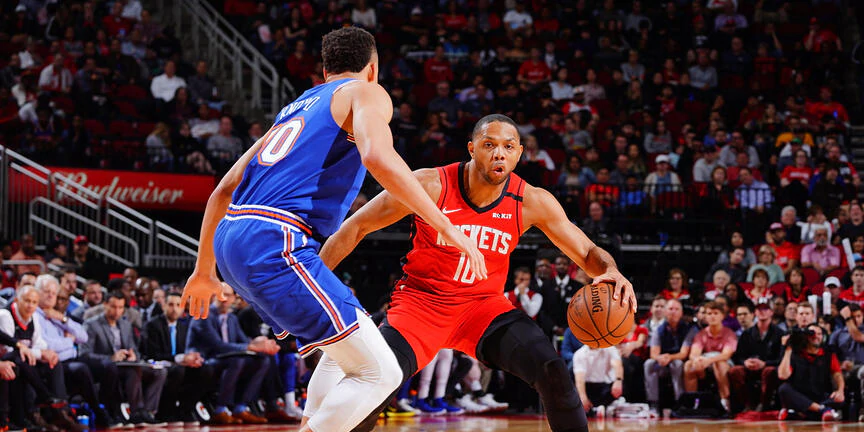 James Harden and the Rockets had the better of the shorthanded Knicks on Monday night in Houston, pulling away and cruising to a victory.

In the New York Knicks’ first meeting this season against one of the highest-powered offenses in the NBA, the Houston Rockets, the Knickerbockers managed to go shot-for-shot with them to start.

Unfortunately, for the Knicks (17-40), they couldn’t keep up during a game-changing second quarter, falling behind and eventually losing, 123-112.

The Rockets (37-20) took off from long range, keeping their hot-shooting hands all throughout Monday night. Houston drilled 16 shots from beyond the arc. Its success wasn’t just limited to the three-point line, going 43-of-86 overall (50.0%).

Once Houston pushed the lead into double figures, it stayed there for the remainder of the game, as New York struggled to defend and slow down James Harden and the Rockets. As a result, the Knicks have now lost four straight, stretching back before the All-Star game.

With Russell Westbrook out of commission, Harden ran the point and the show. He finished with a game-high 37 points, six rebounds, and nine assists. He tormented the Knicks from opening tip and never seemed to cool off from there. Ben McLemore (17 points), Eric Gordon (16), Austin Rivers (14), Robert Covington (11), and Danuel House Jr. (10) also scored in double figures.

The Knicks will continue their road trip, resuming action on Wednesday night against the Charlotte Hornets.

It was an impressive display and start for the Knicks’ 19-year-old rookie, who helped his team stay within reach of Houston, despite a blistering 6-of-10 three-point shooting performance in the first quarter by Houston.

Barrett had 14 of his 21 points to open the game, shooting an efficient 6-of-8 in the first quarter—until the Knicks stopped feeding him.

The Knicks would fall behind in the second quarter, and by the time they started looking his way again, they were behind and he had cooled off. He was impressive, unafraid to drive inside and attack the basket. While Houston no longer having the services of a rim protector like Clint Capela lends itself to allow opposing teams to take that angle, it should be noted that Barrett was able to succeed and hit his shots against a great defender like Robert Covington.

Although he cooled off in the second half, it would have been interesting if the Knicks had just rode his hot start even longer, especially when they were falling behind.

Let’s get it out of the way. Yes, Harden made him look bad, dropping him early in the game.

After that, it was a pretty good showing for Dennis Smith Jr. He’s been struggling throughout the year, and that is well documented, but this was one of his better showings in a while. He was active in many different facets of the game. His vision and decision-making could have been better at times, but his stat line that includes 15 points, seven boards, five assists, and seven steals is nothing to scoff at, especially when he’s been doing virtually nothing.

With Frank Ntilikina out, he’ll receive more opportunities, so maybe he’ll be able to string together a few solid performances together, as he tries to end the season in a better place from where he started.

There’s just something so poetic about the Knicks needing a scoring punch all throughout the game, then when they finally decide to let Allonzo Trier let loose in garbage time, the sparingly used guard goes out and drills a couple of three-pointers right away.

His offensive and scoring abilities are undeniable. Even though he may pose as a liability on defense, there wasn’t much effort on that end of the court anyways in the second half.

He finished with nine points, on 3-of-4 shooting, in six minutes of action. It was his first game all month, and unfortunately, he’ll probably stay on the pine.

»READ: Have the Knicks found a way to extract the best Frank Ntilikina?