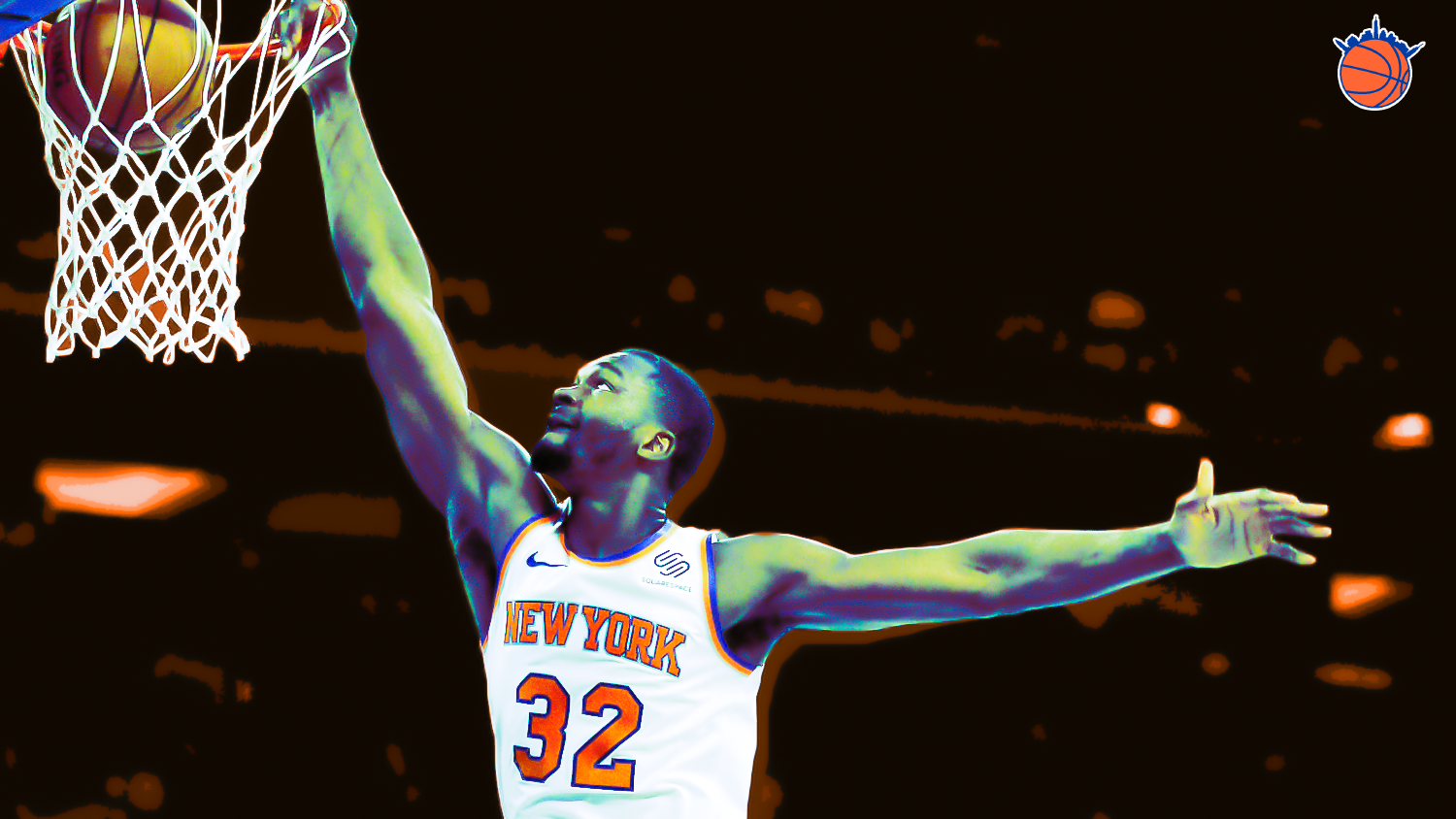 Noah Vonleh has found quiet success to the start of his Knicks tenure. What’s working with the former lottery pick, and how can he sustain prosperity?

A quick reminder, folks: Noah Vonleh has just turned 23 years old. He’s big at 6-foot-10, but impressively mobile, with feline-quick feet. He’s powerful, at 240 pounds, but surprisingly dextrous with that battering-ram frame. This is the foundation of a generally percolating interest in the so far failed former lottery pick and now New York Knick. This kid is a race car athlete. Add to this athletic foundation the outline of a workable jumper, capable ball-handling, and some raw defensive instincts, and you have a mouth-watering recipe of untapped potential.

Vonleh has been mighty impressive through the first seven games of this season. His career highs include a 12.5 percent assist rate (the third-best on the Knicks roster and by far the best of Noah’s career, where he’s hovered around 4.0 percent), the team’s second-best 19.8 percent rebounding percentage (he’s fractions behind Kanter after Monday’s win), a team-best PER at 22.7, and the team’s second-best true shooting percentage at 62.1 (Robinson is ahead with only 15 field-goal attempts).

This production is somewhat dampened by most of his minutes coming against NBA bench mobs, but even so, David Fizdale has clearly awoken something in Vonleh. However, the positional context in which this production has come is telling. Prior to Fizdale’s starting lineup shuffle—in which Vonleh slotted in at power forward next to Mitchell Robinson—the 23-year-old had been playing exclusively as a backup center.

And now, again, after a dazzling first five games as a small-ball center, he’s back at the power forward spot. Of course, Fizdale has openly said that his lineups are fluid and in a constant state of evaluative-flux, as they should be. But there are only so many minutes to go around. If Robinson is in the rotation, then short of excising the disgruntled Enes Kanter completely, at least a portion of Vonleh’s minutes will be at the 4. There, he’ll be jostling with Kevin Knox (once the rookie from Kentucky returns from his early season ankle sprain), Mario Hezonja, and Lance Thomas. Something, or someone, will have to give.

The developmental ecosystem could be a crucial contextual difference between this rebuilding Knicks team, under the long-term stewardship of the developmentally inclined coach Fizdale, and Vonleh’s previous teams. The Hornets and Trail Blazers (let’s ignore a cup-of-coffee 21 games with the Bulls last season) were both playoff hopefuls, and so Vonleh had a shorter leash with the growing pains of a sometimes glacially slow NBA big-man development curve.

In his first start as a Knick, and his first stint at power forward, against the champion Golden State Warriors, Vonleh held up well. He chipped in all over the floor, tallying seven points, five rebounds, four assists, two steals, a block, and one made three-pointer. Defensively, he has all the tools to survive and even thrive as a 4. With that Lamborginhi-athleticism, he can switch onto a variety of players. He’s held his own against both Kevin Durant and Giannis Antetokounmpo this season.

Offensively, though, there are skills and areas that he needs to hone if he’s to transport his defensive versatility to the offensive end. The Warriors game was a good litmus test of the skill sets that will define his success or failure as a power forward; namely, shooting and playmaking. He needs to be a threat from three to maximize spacing. Just a threat is enough. He took, and nailed, one three-ball against the Warriors, but that was only his first make and second attempt of the season so far.

Are… are the Knicks a better 3 pt shooting team than the Warriors??? Vonleh joining the fun pic.twitter.com/S5xnX6YE2U

Shots like these, however low volume, will keep defenses honest if he can knock them down semi-consistently. He should see more of these the more time he spends next to nominal centers. He’s a career 30 percent three-point shooter, but his stroke is solid and repeatable, if not a little flat. Make enough of them, and he’ll not only maximize space for his teammates but open up opportunities to attack close-outs.

Even half-hearted close-outs are vulnerable to Vonleh’s explosive first step, as he sports uniquely nifty handles for a guy of his build and bulk. Vonleh is a bull with a head of steam. Attacking off-balance rotations at the perimeter can generate rotations at the rim, where Vonleh will have to get more comfortable as a shaky distributor, like this play, where he finds Robinson at the basket.

Or looking for open shooters in the corner, like he does here with a quick decision out of the pick-and-roll.

Something he’s shown all season is an ability to push the ball in transition. With those guard-like handles and his innate rebounding ability, he should have plenty of leeway to grab-and-go. Having a big guy initiate the offense like this confuses even the best defenses, causing split-second hesitations and cross matches.

This play is a simple one, hitting Frank cutting backdoor on the Curry overplay, with a perfectly timed bounce pass. It looks easy, but little reads like this are what keep the offense flowing.

These are just a few examples of the situational playmaking that Vonleh will be asked to do more of alongside a rim-runner like Robinson. If he can get comfortable, consistent, and confident making these kinds of perimeter plays; he can cement himself in Fizdale’s rotation anywhere in the frontcourt. That four-assist showing against the Warriors was the 23-year-old’s career high in dimes, but this will have to become less of an aberration if he is to live up to the pedigree that made him a lottery pick.

He might be the most consistently productive Knick on the roster so far this season, which, cruelly, has led to a promotion—in a position, at power forward—that through four NBA seasons he has yet to get to grips with. It will be fascinating to watch Fizdale tap into his bowling-ball big man’s undeniable, and tantalizing, potential. If he can, Vonleh might finally have found a home with the Knicks.