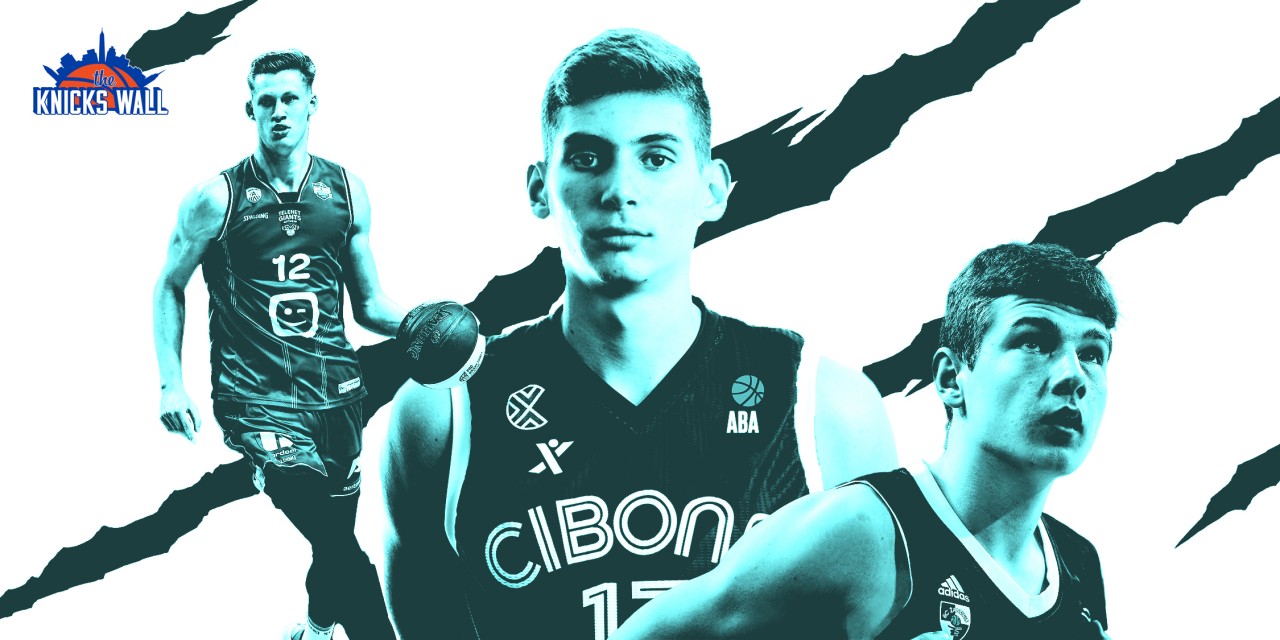 With four NBA draft picks going into the night, the Knicks could always select an international darling like Rokas Jokubaitis with stashing on their mind.

In a loaded draft class, there are many flashy prospects up and down the board for which Knicks fans are yearning. You can read all about these prospects on TKW draft coverage with fan favorites such as Sharife Cooper or Ayo Dosunmu, but today we are going to talk about some international prospects with whom you may not be familiar.

The Knicks have four draft picks, including three in the top-32 picks on July 29th. That gives Leon Rose and Co. a lot of flexibility for draft night moves that could include trading up to go and get their guy if the opportunity arises. However, if they do hold tight with their draft picks, decisions will need to be made involving roster spots.

One option that Knicks management will have available to them is to draft players that will not immediately be expected to be on an NBA roster next year. Whether that is with some time in the G League or staying and playing overseas; there are a few prospects projected late in the first or the second round that would fit that description. The three prospects I am going to be talking about today are Lithuanian guard Rokas Jokubaitis, Croatian big Roko Prkacin, and Belgian wing Vrenz Bleijenbergh.

Rokas Jokubaitis is a 6’4″ guard that could be an interesting option for the Knicks at the end of the first/early second round if they have not already taken a point guard. The Žalgiris Kaunas guard is a complete player and three-level scorer who can run the offense. While he does not have any elite skill, he soundly exemplifies the old adage “jack of all trades, master of none.” He has earned himself an impressive amount of playing time in the second-best league in the world at just 20 years old playing in the EuroLeague.

Jokubaitis’ versatility is one of his selling points as a prospect; at a young age, he has already shown the ability to play on- or off-ball. While he has proven himself a good ball-handler in the pick-and-roll situation, he also moves well without the ball and is an intuitive cutter. This allows him to play either backcourt position offensively.

The lefty Lithuanian is going to be described with words such as “crafty” or “shifty” when his name has been brought up leading up to the draft. Not without good reason, however, as “RJ” shows an ability to compensate for a lack of athleticism with body control and innovative finishing at the rim.

Jokubaitis shows insanely fascinating footwork and coordination. Brandon Davies is not excellent closeout defender but he knows how to close the angle. But, Jokubaitis gives pump and body fake (look his left knee) and attacks to the basket quickly. Impressive. pic.twitter.com/pKR2Npqj18

He has an impressive offensive arsenal equipped with a deadly mid-range game including a plethora of dribble moves leading to pull-up jumpers. Without an explosive first step to get by his defender, Jokubaitis has to think outside the box to create offense for himself and others.

While he has a propensity for getting open looks with off-ball movement, streaky shooting from the outside is still a question in his game. RJ projects to be a very good outside shooter, specifically on catch and shoot situations. If that becomes more consistent, that can make a significant difference in his NBA career.

There are concerns about the 20-year-old prospect’s athleticism, specifically on the defensive side of the ball. While he appears to have a good eye for defense and quick hands, he has physical limitations that prevent him from being an above-average defender. Even with good size for a point guard at 6’4″, the Lithuanian is not particularly long and is a below-average athlete.

The velocity and placement of this pass from Rokas Jokubaitis is insane. pic.twitter.com/zygzo6FDf8

This is where the team that drafts Jokubaitis comes into play. Due to the physical limitations, RJ’s development over the next few years is vital to his long-term success as an NBA player. Whether it is playing in the G League or staying overseas, his physical growth will have to be a priority in his development in the near future. Reports indicate that CSKA Moscow and Barcelona are both working hard to lure the lefty to their organizations next year, meaning he’d be a stash guy, with their development track records and eye for talent speak to his prowess as a prospect.

Roko Prkacin is the youngest player in July’s NBA draft and the son of a Croatian basketball legend. The 6’9″ forward would be best classified as a stretch 4, with an offensive upside that could warrant a first-round draft pick. Playing for Cibona in his home country of Croatia, the big man has competed in the Adriatic League as well as the Croatian League.

The body of a power forward with the skill set of a small forward would be the selling point for Prkacin’s offensive game. He is one of the best roll men in the draft and presents as a great rim-runner and finisher at the basket. Inconsistent would be the best word to describe Prkacin’s long-distance shooting, but when he is at his best, he is truly lethal. His best performances in the Adriatic League included games where he scored 38 points on 6-of-8 from deep as well as a 23-point game on just 12 shot attempts.

38 points on 20 shots for 18-year-old Roko Prkacin against Zadar in Adriatic League play. The 6-9 forward knocked down 6-of-8 threes, which is huge considering his shooting inconsistencies in the past. A lot to like about Prkacin's offensive versatility. pic.twitter.com/r6S8Pbf1iH

At such a young age, Prkacin has an elite feel for the game and an impressive skill set for his size. He shows great vision and passing for a big man. His ball-handling and playmaking ability are projected to be plus skills at the NBA level. When locked in, he can effectively impact every aspect of the game offensively.

Attacking closeouts is another way the Croatian can create offense, he has great speed and a quick first step. At the European level, he has enough athleticism to be able to attack the basket and create offensive opportunities for himself or others. Whether that athleticism would translate to the NBA level remains to be seen, but there is enough upside to add to his appeal as a prospect.

He had a couple of really impressive dunks in traffic against Skrljevo last month pic.twitter.com/1WrWR2hMBj

Defensively, Prkacin is a good rim protector at his current level, how that will translate is again another variable that must be considered as a prospect. He is, however, a plus defender both with shot blocking as well as creating steals and starting first breaks.

Yet as a young player there are some maturity issues on both sides of the ball. Prkacin tends to get lost defensively or not appear focused as well as a propensity for being careless and turning the ball over on offense. Whether those are issues that come from playing at his current level of competition or things he will grow out of with age, they are both areas of concern for any NBA team that could draft him.

The effort and focus issues are small concerns that are mostly outweighed by the overwhelmingly positive offensive potential that the young 18-year-old has shown at this point in his career. The swing skill for him, as it is for many young players, is still the shooting. He shot 39% from downtown on three attempts a game this year, which is a huge step in the right direction. If that is something that can be consistently proven, that is an extremely high-offensive ceiling.

The most interesting of these prospects, and one of the most intriguing players in all of the class, is 6’10” Belgian forward Vrenz Bleijenbergh. This is a player that is going to be on many lists for sleeper picks going into this year’s draft—and not without reason. A “point-forward” with his size and skill has a certain level of intrigue naturally.

You are inherently going to get comparisons, good and bad, to European players throughout the years with this type of high-upside prospect. That is almost definitely going to include last year’s draft darling and Aleksej Pokusevski, along with the term “unicorn.” There are some similarities including the need to immediately bulk up to be able to compete at the NBA level. The production output has not been quite the same and that’s why the Belgian wing is a second-round production instead of sniffing the lottery like Poku.

That is not to say the Antwerp Giants star does not have a high upside (his offensive flashes are singularly mouth-watering enough to squint at a modern NBA fit). In theory, just the idea of a 6’10” ball-handler in the pick-and-roll alone is incredibly appealing to today’s game, coupled with Bleijenbergh’s vision and passing and you see glimpses of something special.

6' 10" guys aren't supposed to be able to pass like NBA Draft prospect Vrenz Bleijenbergh. Exceptional vision and ability to execute passes in a variety of creation situations: pic.twitter.com/PZMrufXfhL

Given his role and tendencies as a point-forward, if you will, the 20-year-old has shown elite creation ability flashes with live ball passes. His speed and size give him the ability to beat defenders off the dribble where he can create for himself and finish at the rim—or find teammates all across the court (his passing is really the highlight of his game). Bleijenbergh’s ball-handling allows a lot of creation opportunities across a variety of situations. His at-the-rim finishing could be better but his shot creation package is impressive for a player of his size with a variety of step-back and pull-up shot creation.

Bleijenbergh’s perimeter shooting has swung like a pendulum throughout his career as a prospect, which he credits to putting on weight and changing his body. However, in his 10 games in the EuroCup this year, he shot 37% from deep on nearly five attempts a game, via RealGM. That is one of the most important things you can possibly look at when evaluating him as a prospect. As for his size, if the show is legitimate, that is a massive offensive weapon.

Defensively, he projects to be an above-average defender just based on his size and athleticism. With a 7’3″ wingspan, it makes him a very appealing defensive prospect. His strength and frame still limit his defensive ability, but the idea of what he can become is still positive. With a lineage of professional Belgian basketball players in his family, Bleijenbergh presents as a very hard worker and someone who will hopefully develop quickly and overcome some of those physical limitations.

All of these players present high value and different opportunities for risks that the Knicks can take in this draft. If the Knicks choose to go this route, they will have a lot of flexibility but the priority will have to be on development as opposed to “win-now” type prospects. With the four draft picks at the very least, they are afforded that luxury, and come draft night should look to cash in.

»READ: Jeremiah Robinson-Earl has to be one of the most polarizing NBA draft prospects

»READ: Is Corey Kispert the right fit for the Knicks?