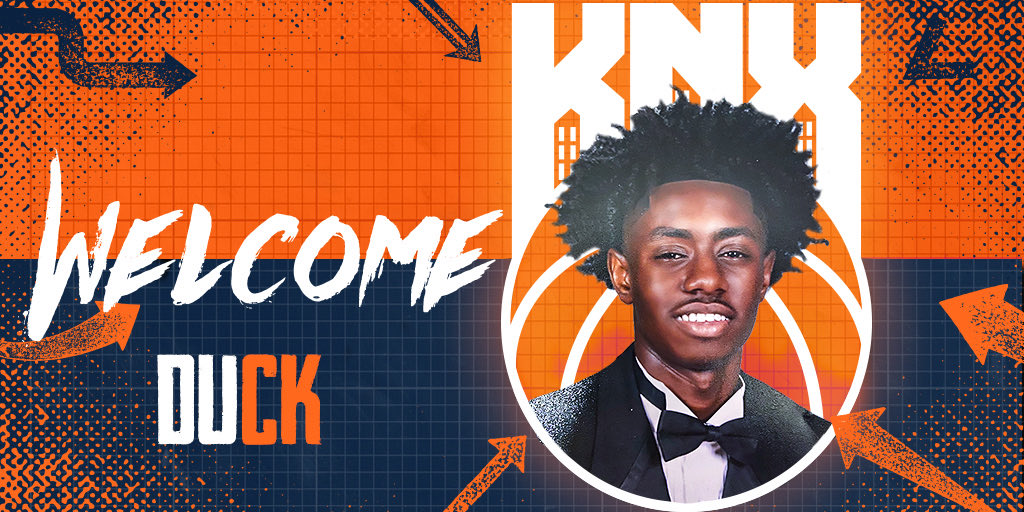 Knicks Gaming star point guard Duck goes in depth about the ups and downs of his NBA 2K League debut season and the performance of the team.

Back in February, Knicks Gaming kicked off their rebuild by selecting Christopher “Duck” Charles with the second overall pick in the 2020 2K League Draft.

The expectations were high as they always are for the Knicks, but they were amplified as the organization was just one year removed from winning a championship.

Halfway through his rookie season, Duck took the time to talk to The Knicks Wall about expectations, his performance, and life as an NBA 2K League player.

The Knicks Wall: How has life been recently in the house with the other Knicks Gaming guys?

Duck: Everyone is doing great. Just trying to get through the season, with what’s going on with the world right now there is a lot of crazy stuff happening but just trying to maintain.

TKW: It’s definitely hard to do your job and also react to everything happening in the world. But I think that esports are a good outlet, through competition.

Duck: Definitely, it’s a way to sort of, not get away, but it’s a way for us to get our mind off it for a second and do what we gotta do.

TKW: For sure. So, how do you feel about the team so far this season, coming off The Tipoff tournament?

Duck: The Tipoff tournament, it didn’t really end the way we wanted it to end, but I feel like as a team we improved. We trusted ourselves more, and became more of a group. I feel like we’re gonna end off really well. We got a seven-game stretch coming up, we got The Turn tournament, and hopefully playoffs. So, I think we’re going to end up in a great spot.

TKW: What do you think you guys can learn from the 2-2 showing at The Tipoff? There was definitely some positives and negatives.

Duck: Definitely some positives and negatives. One thing I will say is that we’re learning to try to overcome, and stay composed. During that Heat game we were up big, and they started to come back in the game, and for four of us it’s our first year in the league, and for our vets Hazza—great dude—help us stay focused. When the Heat started coming back into the game, with Malik being the veteran for us, a guy who you can look to calm us down and get our nerves right, all that stuff. One of the positives from the Bucks series that we lost 0-2 is that we never got on each other. Obviously we were rattled in that second game of the Bucks series, but none of us lost control, we stayed composed and what we could to the best of our abilities.

TKW: Those were entertaining the game, and the Bucks played really well. I thought you guys played well, but it was tough. For Malik, what do you think he’s brought for you, as he’s been playing so well, has he been able to help you?

Duck: Malik is definitely one of the biggest parts of this whole process. In being my shooting guard, the person in the backcourt with me, who’s been in the league before, been on the stage and dealt with the pressure, he’s somebody who can take that pressure off my shoulders. He’s a great piece to this team. He’s always uplifting, always makes sure everybody is composed, and makes sure everybody is doing their job. If I’m not playing well, I know I can give the ball to Malik. It’s a duo kind of thing. Me and him are definitely one of the best backcourts in the league. Definitely two players that can take over a game whenever they want to. Coming into this season, I didn’t expect Malik to be playing at the level that he is. I thought Malik was going to be good, but he skyrocketed this season. His improvement is way beyond measure, from what I watched last year.

TKW: He’s gotten so much better. Knicks (Gaming) really revamped the team with him, and Hazza, being the only returning player from last year. And even with not winning The Tipoff you guys are still in a good position.

Duck: I feel like we’re in a good position. Obviously the tournament didn’t end the way we wanted it to but it helped us as a team, especially with this upcoming last seven games in the season, and with another tournament coming up. I feel like with the tournament we just played in we got all our nerves out we’re ready for the next one and ready to move on.

TKW: So the next step would be to secure a playoff spot, but to secure it what do you think you guys have to do? If you envision “Okay, we’re in the playoffs” what did (the Knics) do to get there?

Duck: Right now, we’re 5-4 on the season. We’re going to have to win a majority of our games coming up. We gotta keep playing the same way we’ve been playing. I feel like we’ve had some very, very tough opponents. People that we’ve been able to stay in the game with, but ultimately not take control of it all the way and get a W. I feel like we’ve been playing great all season, and only getting better. Especially from our first game to now. You can just tell, me and Malik are more in sync, the defense is getting better, and everybody is getting better.

TKW: Do you think that the new format they had to change to, the best-of-three for each game has changed some of the dynamics to how the season is going?

Duck: I feel like, with it (us) being at home, they want to make sure the better team wins, which is why they want to do this best-of-three thing. It benefits us because I feel like we have a very talented team, and with those one game situations like how it was last year, there’s some teams that had the better roster and more skill didn’t win because it was only one game.

TKW: It’s interesting because, when watching you guys, the first game is always a little bit different than the second game. How do you guys feel you make adjustments to win games two or three?

Duck: If you watch us, we usually come out and win game one if we do end up winning the series, but sometimes in game two or three we slow down a little bit. One thing that I’ve been looking at, obviously there’s the home court advantages with the East and West thing, I feel like that’s one of the major problems. Sometimes you have to go to the other teams server, and maybe we don’t play as well as we are supposed to on there. And sometimes we don’t play to the best of our abilities, and that’s something we have to work on.

TKW: It’s strange because last year I covered (Knicks Gaming) and it was in person and a lot of the energy in the arena with so much smack talk, are you excited to eventually experience that?

Duck: I know that eventually we’ll be able to be on stage. It was one thing I was excited for coming into the season, to be around my friends and teammates and opponents directly across from me, being able to talk trash. Obviously we won’t be able to do that this season, but it really is something I wish that we were able to d because I feel like the intensity that me, Malik, Rim, and especially Hazza to come back there, Hazza is always talking, I’m always talking, Malik’s always talking so it is definitely something that would’ve helped us out. Unfortunately that’s not the case so we just have to play the cards we’re dealt.

TKW: How do you feel about playing games at home, instead of going to an arena? Is it more comfortable?

If you don’t think this is the dunk of the year… imma need you to go ahead and delete your account ?@ChrisPesos_ pic.twitter.com/Qcia8BNGor

TKW: How do you feel about (Knicks Gaming coach) Kyle (Rudy)? I spoke to him just before the season, before the original schedule was delayed.

Duck: Coach Kyle has been great to me. He’s a great dude, you can tell he’s very mature. Obviously he’s won a championship, so he knows what it takes, he’s coached at the highest level and been on that stage. He’s somebody I can look to for advice in the game, and that’s what a coach is supposed to be, somebody that you can count on and look for. He can help you out when you aren’t playing to the best of your ability. He’s somebody that I know will never lie to me. That’s one thing I can’t stand, is when people lie to me. I hate it. I knew he’s gonna tell me the truth. If I’m playing bad he’ll tell me, if I’m playing great he’ll tell me.

TKW: He definitely seems like a no BS kind of guy, but he’s also so nice too. How has he handled your transition to joining the 2K League? And what do you see as the biggest difference in life since getting into the league?

Duck: The biggest difference for me is my parents being more involved into what I’m doing. Obviously they knew I played games before, but not at the level I’m playing at right now. Now they send me videos of me being on ESPN2, YouTube, Twitch. Just being able to see me on a much bigger platform. I’m getting more praise, more exposure, more opportunities to show what I can do. They have the camera on me 24/7. When I played proAM before the league, I was never on camera. I never had to watch what I say or anything like that. But now I’m the face of an organization, somebody that has to be respectful at all times, and somebody who has to carry themselves a certain way.

TKW: It’s a lot, right? I know that people knew you in 2K circles, but going from the proAM league to the 2K league it’s such a change, your face is everywhere, you’re looking at your hair like Oh God, or at least that’s what I would do.

TKW: I’m sure your family is so proud of the success.

Duck: Yeah, definitely a big change, my parents never really watched the games, but now they see me on different broadcasts, they’re always talking good about me. They respect what I do and I love them for that.

Thank you Duck for taking time to talk with us. This interview has been edited and condensed for clarity.