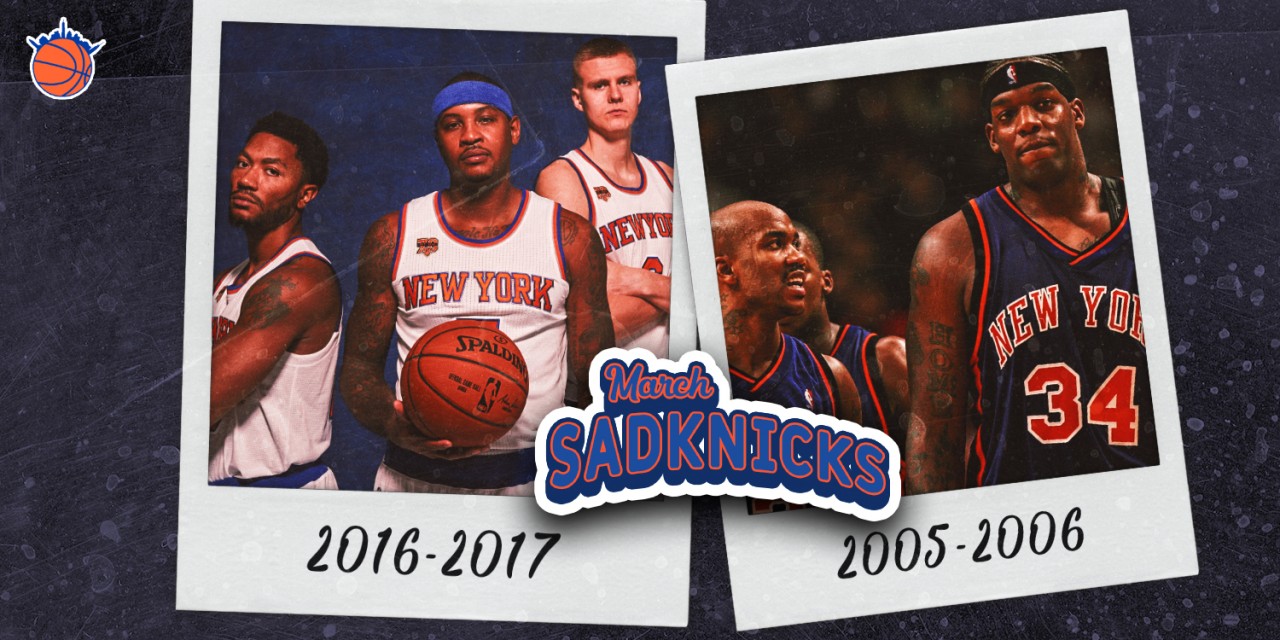 The Knicks Wall’s Eli Cohen presents: March SadKnicks. A bracket of the worst Knicks seasons in recent memory voted by you.

We’re nearly a week into a sports-less world, and for those of us under Shelter in Place ordinances, that means nothing but time to eat quarantine snacks, only wear sweat material clothing, and reminisce on past Knicks seasons. Now, every team has a brand, and the Knicks brand happens to be losing, spectacularly and in heartbreaking fashion. With that in mind, I created my very own March Madness of the worst Knicks seasons in recent memory. Consider it an homage to horror, an ode to odoriferousness. This is the Worst of the Worst: tournament style.

Author’s Note: I used 1980 as a cut-off because it represents the bridge from the happy days of the 1970’s to the sad days that followed: the end of Red Holzman, the rise and fall of Patrick Ewing, and everything else that led us to where we are today. Winners of each match-up will be decided by a Twitter poll, and I will be recapping each day’s results as we go. Seedings are based on a combination of record and emotional damage inflicted by individual seasons, which is why some teams with better win/loss ratios might be higher seeds than worse-performing teams. 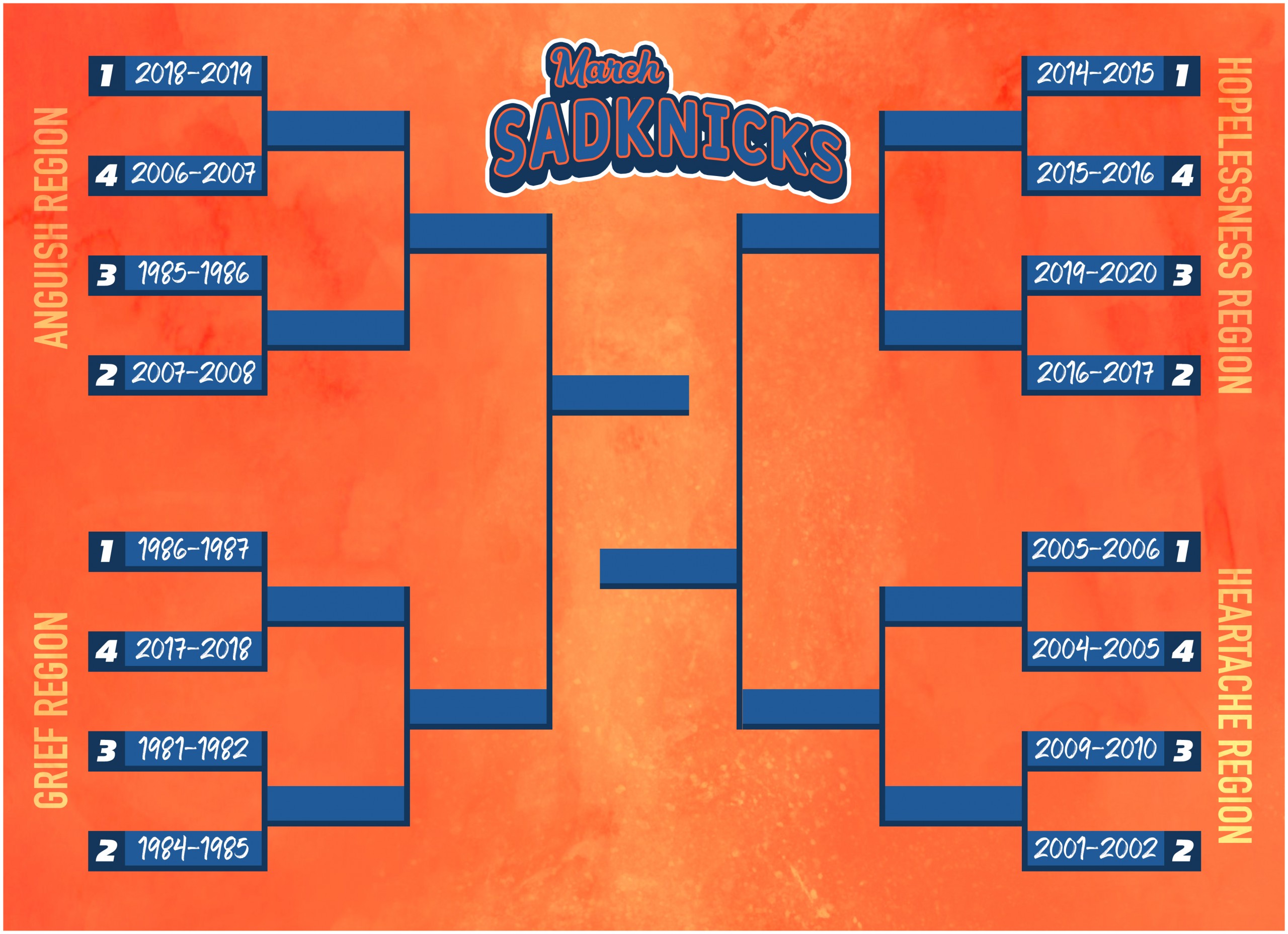 This team recorded the longest losing streak in franchise history: 18 games. Kristaps Porzingis spent the season recovering from a torn ACL and was then abruptly traded for one of the worst returns for an up-and-coming star in recent memory. Enes Kanter. Noah Vonleh coast to coasts. Emmanuel Mudiay. Frank Ntilikina not developing. Bright side: Mitchell Robinson’s out-of-the-blue emergence as a defensive force, Kevin Knox winning one Rookie of the Month award (Knicks fans will never let you hear the end of it), Allonzo Trier’s iso-gunning.

Welcome to Peak Isiah Thomas era. The three-headed monster of Stephan Marbury, Steve Francis, and Jamal Crawford. Eddy Curry in his one productive Knicks season. Quentin Richardson and Nate Robinson. Renaldo Balkman playing over 1,000 minutes. Bright side: some pictures are worth a thousand words. 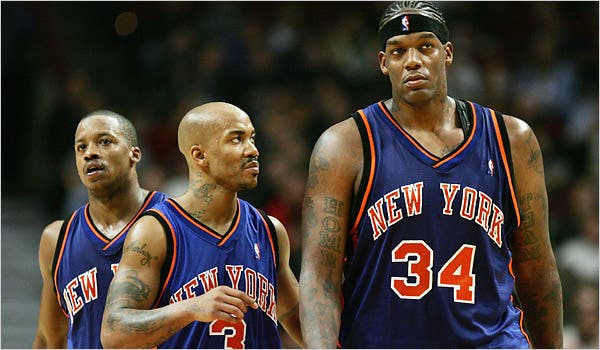 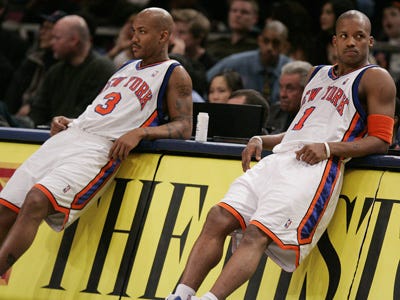 Bernard King was out for the season. Injuries limited rookie star Patrick Ewing to 50 games and Terry Cummings, the only other Knick averaging more than 13 points a night, played just 31. Bright side: Ewing showed why he was the number one pick, averaging 21, 10, and two blocks a night, winning ROY, and having the worst record didn’t matter because next year they were getting healthy King and second-year Pat… or were they?

Marbury beefing with Isiah because Thomas planned to pull him from the starting lineup. Rumors of an actual physical fight between the star point guard and his head coach. “Fire Isiah” chants in the Garden. Marbury choosing a possibly unnecessary season-ending surgery in February. The team finished bottom 10 in points, assists, blocks, steals, three-point percentage, and field goal percentage. Bright side: Isiah was fired after the season (though he was never more than an arm’s reach away).

Bernard King only played 55 games, tearing his ACL on March 23rd. He would never be the same. Pat Cummings at 15 points a game was the team’s second-best player and he only played 63 games. No one else scored more than 13 a night. Bright side: despite the devastating injury, King led the league in scoring at 33 points a game, beating out MVP Larry Bird and young Michael Jordan.

Obviously I wasn’t alive for this season, but here’s what I gleaned from some research: this was the final Red Holzman season. The best scorer on the team was Michael Ray Richardson, who put up 18 a night. There were reports that FBI informants claimed “coked-up Knicks players fixed games as a favor to their drug dealer.” Bright side: by their league-wide averages, they weren’t actually that bad in any particular area. Just aggressively mediocre. I guess that’s something?

KP’s ACL tear (and everything else to follow), Tim Hardaway Jr. chucking his heart out. Jarrett Jack prioritized over top-10 pick Frank Ntilikina. Bright side: “‘Melo on the left block,” KP’s All-Star first half of the season, the Indiana game.

The King is back plus Ewing’s sophomore season. Should be amazing, right? Nope. King played six games, Ewing struggled with injury, Hubie Brown was fired. King was released at the end of the season, marking the end of his stardom. The Knicks, coming off a season with the worst record in the league, fell to no. 5 in the draft and though they desperately needed a point guard, drafted small forward Kenny “Sky” Walker, who averaged 10.4 points in 25 minutes his rookie season and then never hit that number again. The Dunk Contest champ Walker was out of the league by ’93. Bright side: Ewing continuing his progress as a future superstar.

The Channing Frye draft day trade that lost the picks that would become LaMarcus Aldridge and Joakim Noah. Marbury and Francis. The situation with Marbury was so bad Larry Brown was fired, which led to Thomas being hired. $95 million for Antonio Davis, Malik Rose, Eddy Curry, Jerome James, Jerome Williams, and Maurice Taylor. This:

Bright side: See video above.

Washed up Penny Hardaway. Vin Baker, Michael Sweetney, and Nazr Muhammad! Yet another coach (this time Lenny Wilkens) just up and quitting. Bright side: Starbury’s best year as a Knick, plus a solid Crawford season.

Missed out on Steph, ended up with Jordan Hill. Gerald Wallace–led Bobcats got into the playoffs over the Knicks. Washed up Tracy McGrady, washed up (24 year-old) Darko Milicic, washed up Larry Hughes, Al Harrington as the second-best scorer. Chris Duhon started 59 games. Cuttino Mobley was the fourth-highest paid player (he never played a game for them). Eddy Curry’s nadir. Bright side: Nate Robinson’s second-straight dunk contest title.

The official end of the glory days and beginning of The Dark Times. First time in 15 years they missed the playoffs. Van Gundy saw the situation was hopeless and quit on the spot. 36-year-old Mark Jackson’s return. Othello Harrington. Bright side: Latrell Sprewell and Allan Houston each had one last good season for the Knicks.

The bitter end of the Carmelo Anthony era. Phil Jackson cyber-bullying ‘Melo into waiving his no-trade clause, including having his mouthpiece Charlie Rosen write articles trashing the Knicks star. Painful to watch, but even more painful was how fans treated him, booing him on his home floor time after time. The dagger to the heart was a game in January against the Hornets. Chants of “Trade Carmelo” had broken out before the game, and he was booed all night as he proceeded to go 8-26. But those boos turned to cheers when Anthony hit the fadeaway shot to go ahead late in the fourth, leading to this heartbreaking moment (watch his face and what he says to the crowd):

And just like that it was over. One of the few superstars to ever come to the Garden was successfully driven away. Bright side: KP’s emergence as the most exciting Knicks prospect since Ewing (this, like everything else, will soon turn to sadness).

Julius Randle, 34-year-old Taj Gibson starting 90% of the season over franchise cornerstone Mitchell Robinson! No KP, Kevin Durant, or Kyrie Irving! David Fizdale fired, Steve Mills reassigned, Scott Perry lame-ducking! Spike Lee fiasco! Not testing the players for coronavirus because they’re asymptomatic, despite almost all the celebs testing positive for it being asymptomatic! Way, way, way too many PR statements. Whatever the hell this was. Bright side: R.J. Barrett, Frank Ntilikina/Robinson/Knox’s baby steps in the right direction.

The year it became clear the Knicks had failed Carmelo and would never not fail him. Tyson Chandler and Raymond Felton were gone, replaced by Robin Lopez and Jose Calderon. Endless, awful Aaron Afflalo free throw line post-ups. A cornucopia of bad journeymen: Derrick Williams, Sasha Vujacic (who started 25 games!!!), Lou Amundson, Jimmer Fredette. A player actually getting shot and robbed (this was really sad and I still feel terrible for Cleanthony Early, but also, what other team would this happen to?). Bright side: Porzingis being ready for primetime. I still remember where I was when he busted this out in the second game of the season.

So there you have it, the worst of the worst. Who will be the ultimate Knicks loser? The choice is up to you, readers!

The Knicks Wall’s official Twitter account will be sharing a thread of polls for each matchup. Stay at home and vote.