Is It Too Early to Consider Kevin Knox a Bust? 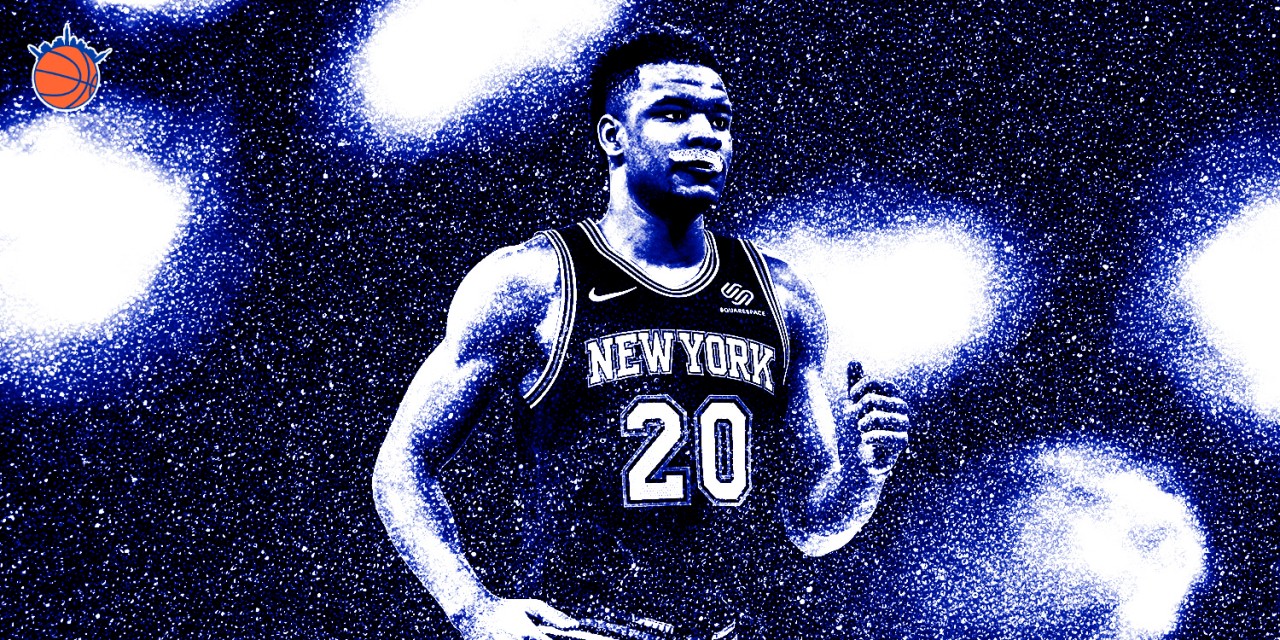 The numbers suggest former Knicks lottery selection Kevin Knox is a bust already, but he’s 20 years old and on one of the all-time worst teams.

Eighteen months ago, it became clear during the pre-draft process that the Knicks front office had become infatuated by Kevin Knox. So much so that on June 21, 2018, the Knicks selected Knox ninth overall, at least three to five picks higher than where he was originally projected to go approximately a month before that.

It was at this point that the Knicks’ fan base asked why. Mikal Bridges was sitting on the board for the taking, after averaging 17.7 points and shooting 43.5% from beyond the arc in his 2017–18 National Championship season at Villanova.

The media and Knicks fans began to consider all the reasons why the team drafted Knox over Bridges. Knox is nearly three years younger and has athleticism that gives him a much higher ceiling than Bridges at the NBA level. What the Knicks failed to consider was which player had the higher floor.

Mikal Bridges had developed for three seasons at Villanova, was extremely efficient on offense (65.6 TS% in his college career), and was a former Big East Defensive Player of the Year.

Kevin Knox had only spent one year at Kentucky, showed potential offensively, but didn’t show much at all defensively. The Knicks were drafting a project, rather than a guy who seemed to be one that would step on contribute right away.

We’ve seen this with the Knicks over the past five years. They drafted Kristaps Porzingis, Frank Ntilikina, and Kevin Knox, all projected to be high ceiling, low floor, project-type players. No one expected Porzingis to be as good as he was right away. With Ntilikina, we’re in year three and haven’t seen the development to make you think he’ll be on the team much longer.

Going back to the Kevin Knox vs. Mikal Bridges debate, let’s call it like it is. Neither has played like a top-10 pick. However, only one has put up historically bad numbers so far, and that’s Knox—posing the question of whether it’s safe or not to label him as a bust already.

In 28.8 minutes played per game in his rookie season, Knox shot an abysmal 37% from the field. He was one of 28 rookies in NBA history to have a True Shooting percentage of less than 48% and fewer than -0.5 Win Shares in greater than 20 minutes per game (Basketball-Reference).

Not only was his offensive efficiency horrific, but so was his defense. Knox had a Defensive Box Plus Minus (DBPM) of -2.4. If you add less than -1.0 DBPM to the previous criteria, he’s only one of 16 rookies to do that.

When FiveThirtyEight came out with their analytical CARMELO NBA Player Projections following last season, they valued Knox at -$90.2 million over the next five seasons.

While the analytics, statistics, and much of NBA Twitter have already dismissed the idea that Knox could one day turn into a good player, it’s arguable that Knox has been subject to a bit of unfair judgement. After all, Kevin Knox was thrown into a situation in his rookie year where he was taking the third-most shots on a team that went 17-65. That’s not exactly the recipe for success for a player who isn’t ready for it as soon as he comes into the league.

Referring back to the previous list of 28 rookies in Knox’s category, Knox was fifth on the list in minutes played, and sixth in field goal attempts. It was possible that Knox’s increased opportunity too early was a major reason for his early struggles.

Going into this season, the expectation for Kevin Knox was improved play as his role in the offense would shift to a role player off the bench, and he’d have a full season of experience under his belt. After all, De’Aaron Fox was on this list of 28 players who had brutal rookie seasons before he exploded in his second season in the league.

However, Knox’s numbers have barely improved from his rookie season, which is a cause for concern. His field goal percentage has increased from 37.0% to 38.7% and his three-point percentage has barely increased from 34.3% to 34.5%. Additionally, he still looks lost on defense almost every single time he steps onto the floor.

Through the Knicks’ first 11 games, things looked promising for Knox: he was averaging 10.3 points per game, shooting 44.4% from downtown. Since then, he’s not only cooled down significantly, but had his minutes cut down for defensive reasons. Knox has regressed back to the player we saw in 2018–19, which is brutal to see for a 7-24 Knicks team that is looking for anything positive right now.

While it’s crushing to see Knox’s overall bad performance, his flashes (just as we saw at the beginning of the season), make me reluctant to call him a 100% bust yet. Even if Knox isn’t putting stretches of good games together, he’ll have a phenomenal play here and there that makes me still think he could turn into a decent player at some point in his career.

Hell of a play by Kevin Knox. He breaks up a 2-on-1 for the Nuggets and gets the big block at the rim. Then he hits the 3 on the other end for the Knicks. https://t.co/bIINEcFhTR pic.twitter.com/vVAhbH27pY

After all, Kevin Knox still is just 20 years old and possesses the size, athleticism, and shooting stroke that it takes to develop into a good NBA player.

When you draft a player with the ninth overall pick in the draft, he’s someone you usually expect to become a high-end starting player. I’m not sure that’s attainable, but I don’t think it’s time to give up the idea of Knox becoming a solid starting player, or productive role player at some point down the line. In order for this to happen, there’s no question that his defense and decision making is going to need to drastically improve.

However, is it possible that his development comes with another team not named the Knicks? I think it is. Regardless of whether Kevin Knox is or isn’t on the trade block this upcoming trade deadline (everyone should be except R.J. Barrett and Mitchell Robinson), how can the Knicks be trusted to develop a first-round pick? Other than Kristaps Porzingis, who was traded after playing only 186 games with the team, you would have to go back to Danilo Gallinari to find the last time the Knicks developed a first-round selection into a solid NBA player.

With Kevin Knox, R.J. Barrett, Mitchell Robinson, Frank Ntilikina, Damyean Dotson, Dennis Smith Jr. and another top pick on the roster, it’s time for the Knicks to focus on player development. Every single coaching hire needs to be completely dedicated to their history in player development. That’s one of the many things this Knicks team needs to do to not only turn the franchise around, but also make the most out of their young core, including 2018 ninth overall pick Kevin Knox.