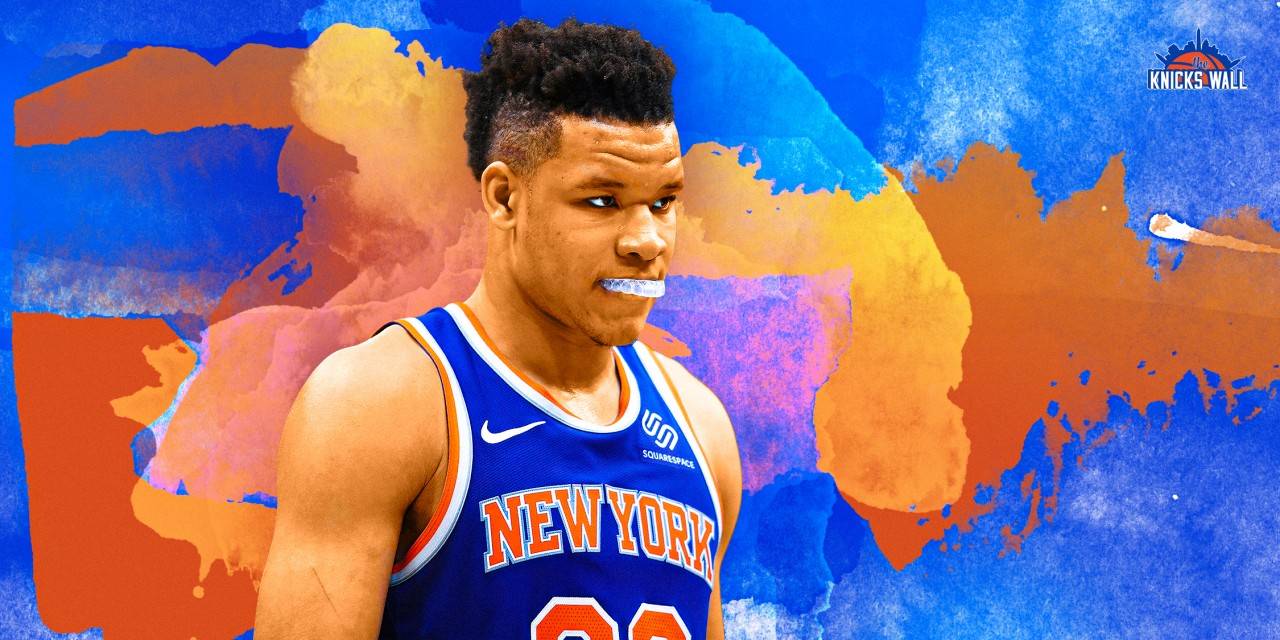 Kevin Knox’s stats haven’t drastically changed, but the third-year Knicks forward is buying into his role—expertly sold by Tom Thibodeau as a 3-and-D bench contributor.

The 2020–21 season is a crucial one for the New York Knicks’ young core, a point that has been stressed in articles over and over again. What’s ironic about this is that, while the 21-year-old forward is only in his third season, Kevin Knox wasn’t a focal point of these discussions. Why? Many people, myself included, wrote him off after two seasons in the league.

This is based almost entirely on the eye test. Knox has had moments this season that makes you think he could end up carving out a role for himself in the NBA. If Knicks fans were asked in 2018 when Knox was drafted how they would feel if he ended up being a role player, a lot of them wouldn’t have been happy. That being said, think about what Knicks fans would have said if asked that question this past summer. They’d probably be ecstatic with it given what we’ve seen the past two seasons.

One major change with Knox this season is that his jump shot, specifically his three-pointer, looks a lot better. His shot is more confident, and his release is a bit quicker. Additionally, he’s playing as a catch-and-shoot role player with a bench unit that has had a lot of success early this season. This started during the preseason, as Kevin Knox shot 17 threes in the preseason on no dribbles, according to The Athletic’s Mike Vorkunov.

Kevin Knox took 17 3s in preseason on 0 dribbles. He missed his first seven 3s then hit 9 of his next 10. Wrote about the Knicks wing shooting on the move & finding gaps to relocate.

Knox: “My teammates are always coming to me asking how I’m always open."https://t.co/bfeRK1MBba pic.twitter.com/V4NekBKN2i

While his overall stats look similar to last season, he’s had promising individual performances. In the Knicks’ win against the Hawks on Monday night, Knox had six points on 2-of-3 from downtown in 18 minutes. One of his threes was arguably among the best shots hit in the game.

This contested shot at the buzzer is a one Knox might have missed in the previous two years. Additionally, Knox also had six points on 2-of-2 from beyond the arc in the Knicks’ win against the Cavaliers on December 29th. His numbers aren’t jumping off the stat sheet, but he is having efficient games making important contributions. Keep in mind this is still only eight games into the season—a very small sample size. Expect Knox’s overall numbers to look a lot better by the end of the season.

Knox looks a lot more playable this season compared to last due to this role change to a 3-and-D, catch-and-shoot player, as mentioned earlier. Under David Fizdale, Knox was forced to do way too much, which set back his development tremendously. As a rookie, Knox took 12.2 shots in 28.8 minutes per game. He was used as a focal point in the offense on a Knicks team that went 17-65. Not only is that not when Knox isn’t at his best, but that’s just too much to ask from a guy who was drafted where he was because of his “potential.” Knox wasn’t a polished player coming into the league.

After watching Knox over the previous two seasons, it’s clear that turning him into a 3-and-D, catch-and-shoot player is the right move. Knox’s handle and passing are too poor for him to have the ball in his hands much at all. All credit goes to Tom Thibodeau for realizing this and using Knox this way early in the season. It’s almost like Knox is starting over with how drastic of a role-change this is. That’s why it’s not right to judge him based on his overall stats through seven games, but rather what we’ve seen from the eye test.

Is the Starting Lineup Next?

What does Kevin Knox have to do to move into the starting lineup at some point this season? There’s one glaring reason he’s currently not in the starting lineup, and that’s his inconsistency. Currently, Knox can’t string together multiple good games in a row, and that’s a reason for his poor overall stats. In fact, it’s even hard for Knox to string together two good halves in a row.

For example, against the Raptors, Knox started the game making two of his first three shots, both of which were threes. He then went 3-for-11 the rest of the game going 0-for-6 from beyond the arc during that span. If Knox didn’t have these cold spells, then he’d be easier to play for a longer period of time.

However, Reggie Bullock isn’t exactly doing a lot to keep his job in the starting lineup. Bullock is averaging 9.0 points per game shooting 38.6% from the field and 33.3% from three in 29.7 minutes per game. While Knox appears like he can be a better option than Bullock, there’s also Alec Burks in the way when he returns from his ankle injury.

Burks is averaging 20.7 points per game on 53.1% from the field, 66.7% from three, and 90.0% from the line in three games played. While Burks had been one of the Knicks’ three best players, Thibodeau may instead elect to keep him coming off the bench, as he’s been great initiating offense for that unit. If that’s the case, that could open the door for Knox if he strings together multiple good games in a row.

The bottom line is that Kevin Knox could be on his way to improving under Tom Thibodeau, the same way Julius Randle and R.J. Barrett have thus far. While Randle and Barrett’s growth has been evident and fast-moving early in the season, Knox’s may be a bit slower. That being said, Knox has certainly shown flashes to indicate a jump may be on the horizon at some point this season.

No one thought Randle would do it. Why can’t Kevin Knox?

»READ: What’s next for Kevin Knox?