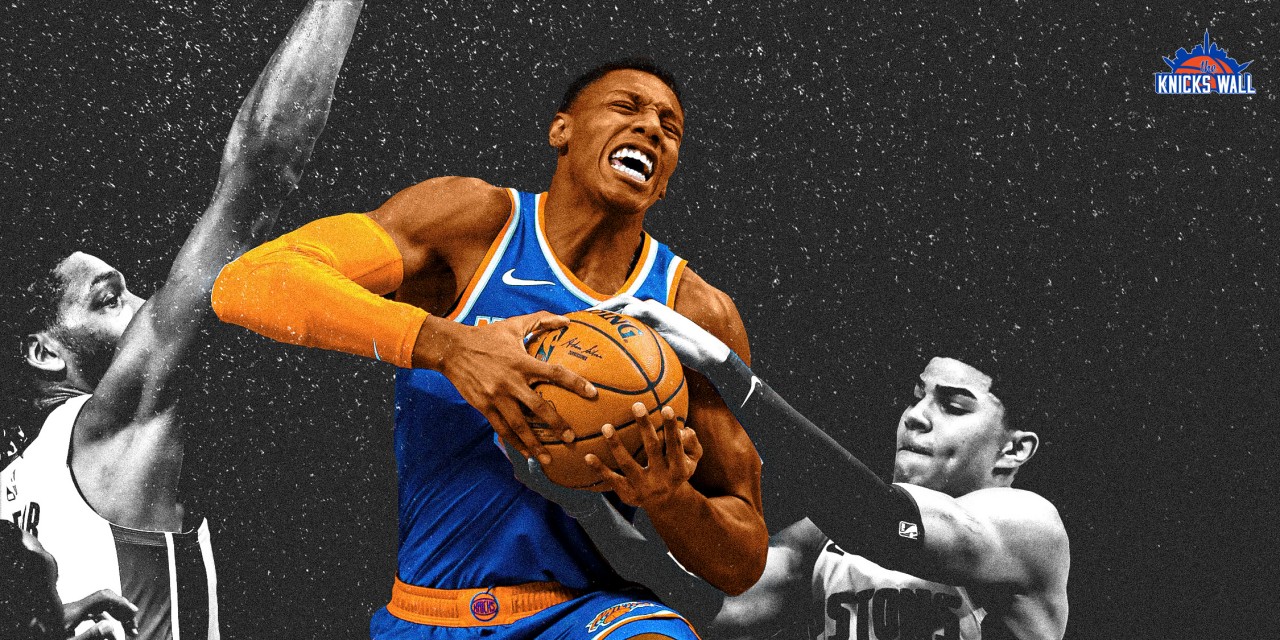 Sophomore RJ Barrett has had anything but a steady 2020–21 campaign, but there are glimpses of a true everyday impact player in his game.

There’s a lot to like about second-year guard R.J. Barrett, but one major storyline for the New York Knicks through the team’s first 15 games has been the 2019 third overall pick’s inconsistency.

In the season opener against the Indiana Pacers, Barrett had arguably the best game of his young career, scoring 26 points on 11-of-15 from the field and 3-of-3 from beyond the arc, while also adding eight rebounds and five assists to that. After Knicks fans dreamed of the start of a Most Improved Player campaign, Barrett put up 10 points on 2-for-15 from the field and 0-for-6 from downtown in the next game against the Philadelphia 76ers on December 26th.

In the four-game stretch from January 6th through January 11th, Barrett averaged 12 points per game, 7.8 rebounds, and 3.0 assists on 30.3% from the field, 6.3% from three, and 46.7% from the free throw line. The 20-year-old guard couldn’t hit anything in a massive shooting slump.

One point to notice here is that Barrett’s rebounds and assists barely changed. Even when Barrett isn’t scoring, he still impacts the game—he’s averaging 7.4 rebounds per game and 3.4 assists per game on the season. Barrett’s most underrated skill is passing, and there’s still reason to believe that he can eventually play point guard in small spurts at some point in his career if needed.

In terms of the shooting numbers, over the last four games, Barrett has played a lot more towards his strengths. Barrett shot 16.5 times per game over his poor four-game stretch and 14.3 times per game over his last four games. During that poor stretch, he was forcing shots up, whereas, during the good stretch, he’s been taking shots that are a higher percentage for himself as a player.

Right now, Barrett struggles to get buckets in iso situations a high percentage of the time. That could come later in his career, but right now, Barrett’s combination of shooting, handle, and quickness isn’t there consistently. However, Barrett is effective both as a slasher and on plays drawn up to get him open or in space.

Data from Cleaning the Glass

According to Cleaning the Glass in the chart above, going into the Orlando game on Monday, Barrett ranked in the 88th percentile of all wings in percentage of shots that are assisted on at 50%. Additionally, 42% of Barrett’s made shots at the rim are assisted, which ranks in the 81st percentile. To a lesser extent, 33% of Barrett’s shots made from midrange are assisted, which ranks in the 69th percentile amongst all wings. We saw a bit more of this starting in the second half of the game versus the Nets when Barrett began this hot streak.

WHAT A MOVE FROM RJ pic.twitter.com/cOR3LgrR65

While the Knicks don’t have a very talented roster compared to the rest of the league, Barrett’s role should be kept this way to maximize him, and minimize his inefficiencies.

In terms of Barrett’s shooting splits, he’s shooting 60.0% at the rim, 26.7% between three and 10 feet, 25% between 10 and 16 feet, 38.1% from 16 feet to three-point range, and 21.5% from three, according to Basketball-Reference. It’s understandable why Barrett is shooting 4.3 threes per game given today’s NBA, but most of his shots should come at the rim or mid-range. If Barrett doesn’t shoot threes, the spacing will be worse than it already is, but at the same time, he shouldn’t be forced to shoot threes just for spacing. If Barrett shoots a higher percentage from midrange, which he does right now, then he should take more mid-range shots until the three-pointer develops further.

Once Alec Burks comes back and Barrett has more shooting next to him, it’ll take the pressure off him in terms of shooting threes at a high volume. Furthermore, it’ll create more spacing for Barrett, something he needs to succeed.

One more rotational move that could help Barrett is moving Immanuel Quickley to the starting lineup. It’ll give Barrett another shooter next to him, and create even more space.

By the end of the season, Barrett will likely be averaging 18 points per game on slightly better shooting percentages than we saw last season. The streakiness will probably continue; bad shooting games are going to happen for a player like Barrett, who shoots a decent amount, but whose jump shot isn’t there yet.

Barrett has earned patience. He’s had enough bounce-back games and efficient performances to project that down the line he will develop into a nice player for the Knicks. This is only the first season under head coach Tom Thibodeau and only the first full season with President of Basketball Operations Leon Rose. The roster is going to change over the next couple of years, and once Barrett is surrounded by shooters, his game will look a lot better.

Another thing to remember is that Barrett has only played 71 career games. Due to the shortened season in 2019–20, Barrett has technically played under one full season in the NBA. As Barrett’s career progresses, so will the consistency in his game.

»READ: RJ Barrett is Year 2 has a multi-layered and all-around game