Is Obi Toppin Showing Us Flashes of His True Potential? 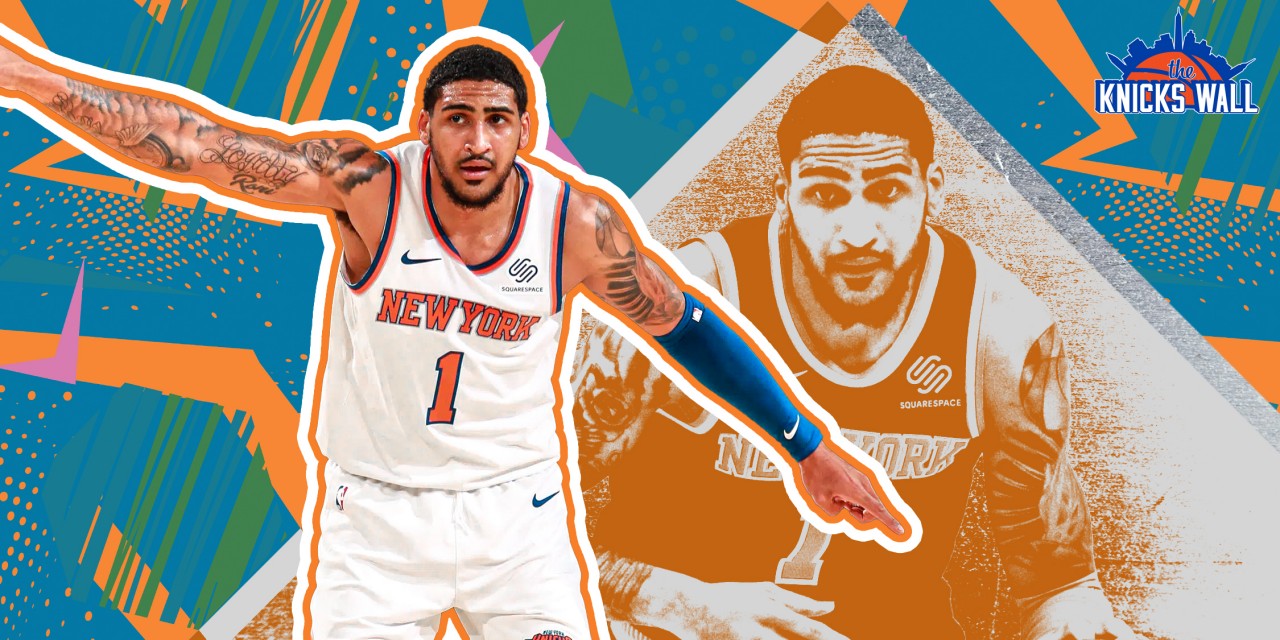 April was kind to Obi Toppin, with the Knicks rookie forward finally perking up with activity on the boards and exciting play.

When our own Jesse Cinquini wrote about New York Knicks forward Obi Toppin and his struggles over a month ago, he left with some sage words of patience about the rookie: “We have yet to see the best of Toppin. Try to appreciate his skills at this juncture and enjoy the ride. He will continue to refine his toolbox over the coming years.”

Lucky for Knicks fans, that wait may not be as long as they anticipated. Over the month of April, Toppin played the best basketball of his young career. Despite averaging just 9.4 minutes per game as the Knicks enter a playoff push and tighten their rotation, he has shown flashes on both ends of the floor and looked as confident as ever with the ball in his hands.

The numbers don’t exactly pop off the page, as Toppin averaged just 4.0 points and 2.4 rebounds per game for the month. However, he clocked in an average plus-minus of +4, whereas his previous high was +0.8 back in February. Toppin has proved a lot more efficient with his time on the floor, knocking down 53.2% of his shots while only previously averaging 47.4%. In fact, the team’s Offensive Rating with him on the floor in April was all the way up to 123.6.

Offensively, as the three-pointer has evolved to be a pivotal part of the Knicks game plan, Toppin has worked on his shot to fit that plan. He shot 28.6% from behind the arc on 1.4 attempts per game, highlighted by a nine-point performance against Toronto on April 24th that saw him make three of his four three-point attempts. While that percentage isn’t great by any means, games like this one show that it is definitely in his repertoire.

“We all get in the gym and get extra shots up,’’ Toppin said after that game, via the New York Post. “We’re all sponges to the game and we’re getting better every single day. It’s helping me.”

A lot of his shot improvement can be attributed to those extra hours at the gym, as the coaching staff raves about his work ethic. New Knicks assistant coach Kenny Payne has been a big part of getting the younger players conditioned and comfortable with playing at the NBA level. Toppin is but another young player in the “House of Payne,” and it’s no doubt that working with him has helped transform his skill set.

“Me working out with Kenny Payne, he’s been teaching me a lot on and off the court,” Toppin said after being drafted about working with the new Knicks assistant. “He tells me to stay the course, be who I am because he knows I love to grind, and he knows I love to work. He pushes me every single day to get better and to be great. And I appreciate that.”

Aside from the three-point shot, Toppin has looked far more comfortable moving around the court with the ball in his hands. He made 19 of the 26 two-point shots he attempted in April, 15 of which were at the rim. He was assisted on 13 of those shots, showing that he is doing a fine job of getting open beneath the basket so teammates can find him for easy shots.

A lot of this can be attributed to Derrick Rose, with whom Toppin has developed a great rapport on and off the court. Toppin operates best with Rose on the floor as the facilitator, as the duo outscores opponents by 18.4 points on the season when paired up together. Additionally, Toppin makes the majority of his field goals and at the highest percentage when on the court with Rose. And with Elfrid Payton’s minutes dwindling as Rose becomes the team’s closeout point guard, those minutes together should increase and prove even more fortuitous to Toppin’s game.

Take this possession against the Suns last Monday, for instance:

Toppin successfully defends the Cam Johnson three-point attempt and immediately hustles back on offense. Rose finds him for the two-thirds court pass, and Toppin fights off Chris Paul to get the easy layup.

“Derrick’s a great vet, and he knows the right plays,” said Toppin after that game against the Suns. “He talks to me before and after every single game and tells me little things that’s gonna help me in the long run.”

This had led to increased confidence when Toppin does have the ball in his hands, like this play from Wednesday’s game against the Bulls. Toppin gets the ball in the corner and thinks about hoisting a three. When Thaddeus Young comes over to defend the shot, Toppin effectively fakes and makes a drive to the rim. After his layup attempt against two defenders bounces off the rim, he shows his athleticism by beating them to the ball and throwing down an emphatic dunk.

Even though Toppin was drafted for his offense and athleticism, the defensive side of his game has picked up in the past month, as well. Mainly, he has done a better job at keeping out of foul trouble. He only picked up nine fouls over 15 games in April and recorded more than one foul in just two games. This is a remarkable improvement over the previous two months, when he was averaging 1.2 fouls while only playing 11.4 minutes per game.

He’s also recorded 36 rebounds, 29 of which have come on the defensive end. Both of these numbers are the most of any month this season for Toppin.

Take this defensive sequence from last Wednesday’s game against the Hawks where Toppin meets Brandon Goodwin in the paint, successfully alters the layup attempt, and secures the board. He performed particularly well playing defense in this game, pulling down five defensive rebounds to go with a plus-minus of +10 in his 12 minutes played.

He still has a knack for careless plays, though, like this one against the Mavericks on April 2nd where he shoves Maxi Kleber to the floor while trying to box out for the rebound. He’ll need to work on refining errors like this, as keeping out of foul trouble is what’s going to keep him in games.

So, while the defensive improvements are mild, the shooting and playmaking abilities Toppin has shown are crucial to his success as a Knick. He was drafted to be an offensive force, and hopefully, he can cash in on this role as the Knicks approach the playoffs. He entered the season unsure of what his fit would be in this lineup but is putting in the work to diversify his game and carve out a role as both a shooter and playmaker.

As the Knicks find themselves lucky to now have a playoff mindset, Toppin has the chance to be a fulcrum in that rotation for years to come. It will be up to him to keep the momentum going and show the Knicks that he’s worth it.