Is This Knicks Team Built to Succeed in the Play-in Tournament? 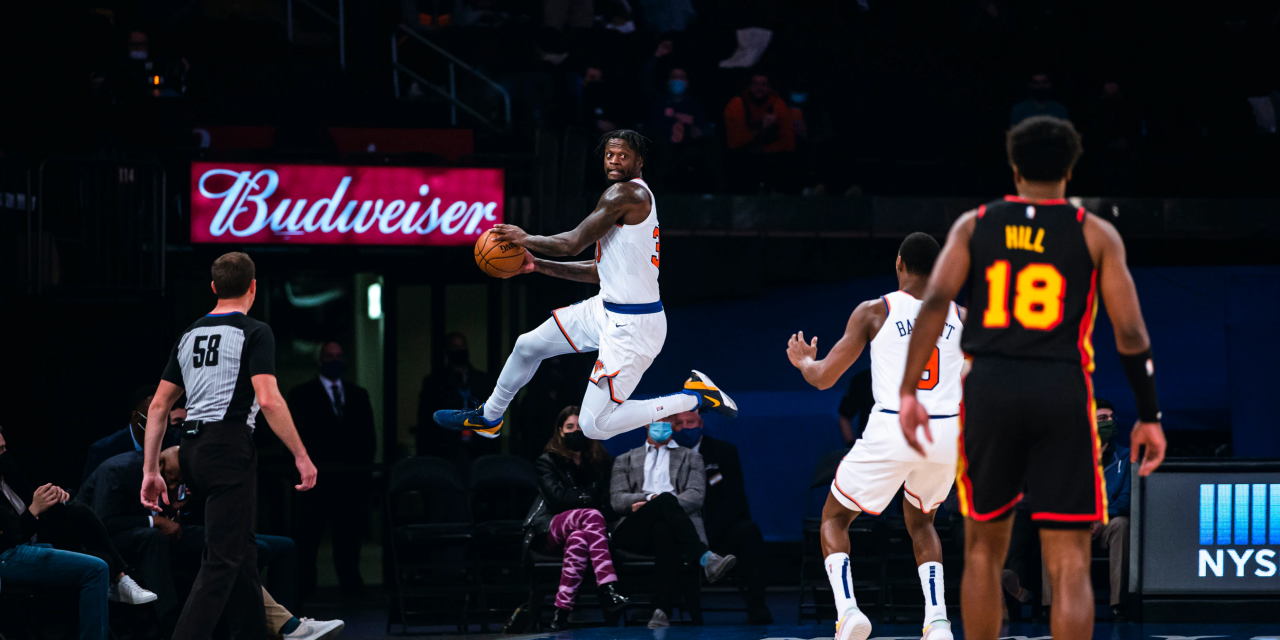 The New York Knicks, a participant crowded playoff push, could find themselves in the play-in tournament. Could New York survive in the do-or-die scenario?

In recent years, the New York Knicks’ team-building plans have been misaligned with the NBA’s rule changes. While it is most likely a total coincidence, changes to the league’s draft and season structure have occurred in seasons that have immediate implications for New York.

Once the Knicks first decided to lean hard into tanking for a top draft pick in 2019, the NBA had changed its rules to make it harder for teams with the worst records to retain a top pick. This season, as New York finally looks like a playoff team again, the NBA has implemented a play-in tournament that forces seeds seven through 10 to play at least one extra game to earn postseason admission.

Neither rule changes have totally derailed New York’s ambition. In that 2019 lottery, they fell to the third pick with the best odds and selected Duke wing R.J. Barrett, who is currently the second fiddle on the Eastern Conference’s fourth seed. And those extra playoff spots do provide some extra insurance for the Knicks—who are seven games above the 10th seed as opposed to 3.5 games above the eighth seed—to make the playoffs.

The risk factor is that the play-in tournament could lead to an early exit for teams in the seventh and eighth seeds. This season, those teams have to play each other to secure a playoff spot. The loser of that game has a shot at redemption by defeating the winner of a matchup between seeds nine and 10, the loser of which is eliminated. It’s not a totally daunting task but could send New York home before they even play a series.

The Knicks have had their flame on like the Human Torch for the past two weeks, using an eight-game winning streak to soar back to the fourth seed. But there’s still plenty of regular season left, and with three teams right on New York’s tail, their spot in the standings is far from concrete. They’ll have a six-game stretch of away games that features five teams in the playoff race, including the Phoenix Suns, Los Angeles Clippers, and Denver Nuggets. That fearsome road trip could undo some of the progress from the winning streak.

New York is only 1.5 games back from falling into play-in territory. While the playoffs are well within reach, it may take a successful run through the play-in to earn a postseason bid. There’s a wide offering of opponents New York could see in the do-or-die game(s).

The Philadelphia 76ers, Brooklyn Nets, and Milwaukee Bucks have been hovering over the conference virtually all season, observing the volatility of the conference’s middle class from afar. Even as their stars suffer injuries and miss games, they’ve found ways to keep their foothold on the conference’s top three spots.

That leaves New York with eight possible play-in opponents, as the fourth seed and 12th place are separated by eight games. In between those standings is a collection of teams that, with one hot or cold streak, could alter the playoff picture. The Knicks’ closest neighbors are the Atlanta Hawks, Boston Celtics, and Miami Heat, who are all within one and a half games of them in the standings. The Knicks’ collective record against those teams is 12-7, which includes three wins against the Hawks and Wizards and three losses to the Heat. Just how well New York would fare in the play-in certainly depends on who they play, but it’s not the end-all-be-all factor.

New York’s performance in close games hints at how a New York could leave a win-or-go-home setting victoriously or in defeat. The Knicks have played in 29 games within five points at the five-minute mark in the fourth quarter, winning 15 of them. Their winning percentage of .517 in such games is the 12th best in the league, per NBA Stats.

The 131 clutch-time minutes the Knicks have ties for the league’s third-highest mark. They have the best Defensive Rating and the 11th-best Offensive Rating. Both marks, particularly the latter one, are promising but there’s very little room for error in a scenario with so few chances.

What could go right?

The Knicks are taking a page out of Frank Sinatra’s playbook and applying it to theirs: “I faced it all, and I stood tall and did it my way.” Tom Thibodeau has New York playing a pace significantly slower than the rest of the league. By forcing opponents to play at the speed they want to, the Knicks force teams into playing their style of ball, which is predicated on bludgeoning teams with their rock-solid defense.

Barrett and Reggie Bullock smother wings. Nerlens Noel crashes slam-dunk parties on the regular. Even uninspiring individual defenders are digging their feet in and contributing to the fourth-best DefRtg in the league. A defense of this caliber can push any offense off its rhythm.

While New York’s team offense isn’t anything special (or even average) they have some individual options they can rely on. Julius Randle can go over the defense with his off-the-dribble jumpers or through it with brute strength. Barrett can knife through a defense and be a reliable catch-and-shoot threat from deep. Derrick Rose, Immanuel Quickley, and Alec Burks have a penchant for finding the hoop.

Under Thibodeau, the Knicks were expected to be a gritty, take-no-shit group. They have been all season and are emphasizing it at just the right time. Three of their eight consecutive wins came in overtime. Several others were fought down to the wire. Last year’s Knicks squad only talked the talk about being dogs on the court; the 2020–21 team walks that walk.

Playoff basketball is notorious for featuring more physicality and a slower pace. Those are the Knicks’ key ingredients, so they should fit right in.

What could go wrong?

All too often, New York’s crunch-time offense crushes their chances at pulling out a close win. Thibodeau’s offensive scheme for when his team needs scores the most is rudimentary. If your name is Randle or Alec Burks, get a bucket. Everyone else, give them space to operate.

Behind Randle and Burks are Rose and Barrett, who have shined brightly when the pressure mounts. New York has the options for when they need a score. The lack of organization for these scorers is the worrisome part. It turns into a one-on-one fest that keeps everyone but the ball handler stagnant, limiting the number of second options.

New York just witnessed this in their last game. They overcame an 11-point third-quarter deficit to win in overtime, but with a little more creativity from Thibodeau, they wouldn’t have needed to play the extra period in the first place. Every Hawks player has their eyes on Randle yet Thibs doesn’t take advantage of it and Randle is forced to go one-on-one 25 feet from the hoop.

The spacing is excellent on this play (helped by Quickley moving up from the corner to the top of the key), but everyone being more-or-less stationary makes it easy for the defense. Something as simple as Quickley setting a down screen for Barrett could get one of them open, giving Randle another option. Something as simpler as setting a screen for Randle before the inbound pass would allow him to catch the ball in a more favorable spot.

Stagnation and lack of imagination in the offense have cost the Knicks games before. In perhaps their most embarrassing loss of the season, Randle was again given no help and had to go one-on-one against the Timberwolves. Gibson is certainly making it harder by setting up camp in the middle of the paint. Regardless, Thibodeau once again sends Randle into the fire, and the Knicks get burned by one of the worst teams in the league because of it.

The best way for the Knicks to solve their problems in crunch-time offense is to not allow the game to get that close. With Randle’s ability to go nuclear on offense and their Hulk-like team defense, that’s not a tall order.

Yet, their recent success shows that they’ve been able to find suitable ways to generate offense when it’s needed the most. Just how well it’ll hold up in a sink-or-swim moment for their season has yet to be determined. As New York heads back into the playoffs for the first time in ages, it’s one of the most important areas to address.