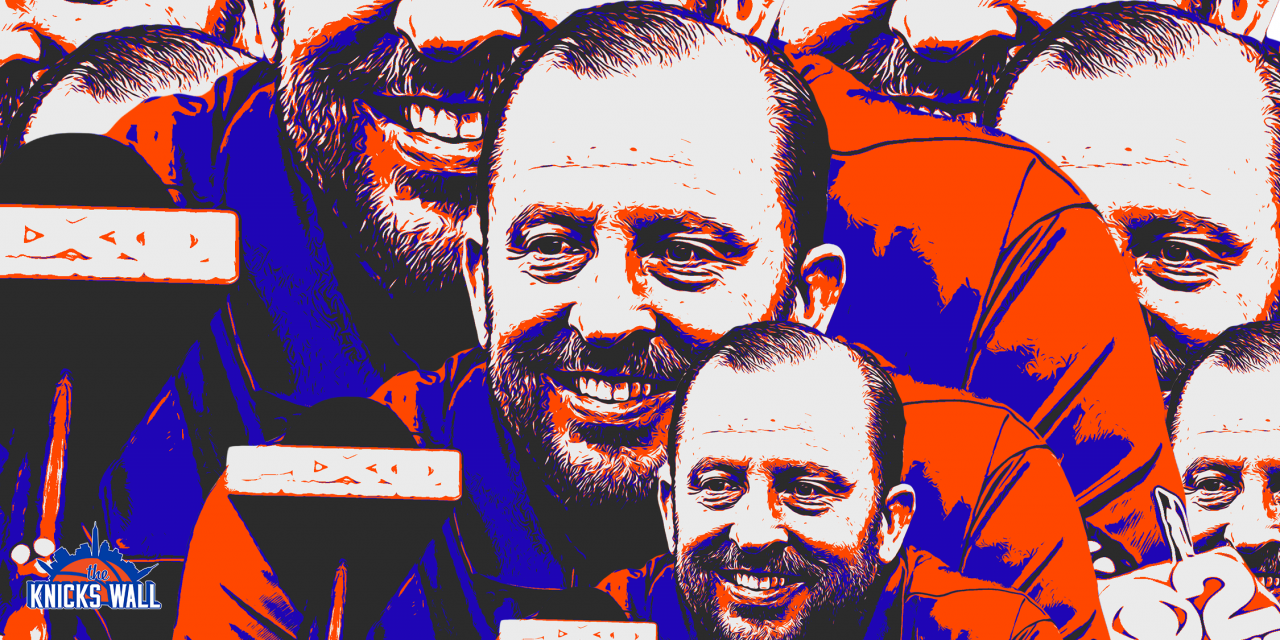 The often rigid Tom Thibodeau is under pressure this season. Will he deliver the necessary results to continue on as the Knicks head coach?

Tom Thibodeau is entering his third and most pivotal season during his tenure in New York and will be looking to save his job and possibly his head coaching career after a rocky and frustrating 2021-22 campaign, which saw the Knicks finish 37-45. Thibs is often viewed as archaic and incapable of adjustments which has proven an increasingly valid criticism of the 64-year-old.

Even when the Knicks were overachieving and in playoff contention during his first season in the Big Apple, a major gripe with Thibs was that he had too short of a leash or no leash at all with his young, ascending players and instead gave way too much run to his less talented and productive veterans. Of course, winning cures all and his roster mismanagement was masked by the best ‘Bockers season in nearly a decade. Last season, when the Knicks were struggling, the spotlight was on Thibs, who received a lot of the blame for the same-old-Knicks type of year and currently finds himself under a lot of pressure to deliver results. If he fails to do so, it seems possible we will see another face running the ship on the sidelines next season, or even earlier.

Most fans have seen enough of Thibs to this point and believe he is set in his ways and won’t adapt. I tend to agree here. It is definitely difficult to adjust, especially if you’ve had success in the past, as he has, both with the Knicks two years ago and the Bulls in the early 2010s.

In any sport or profession, failure to stay current, creative, and flexible usually results in being replaced by someone younger and more with the times. Unfortunately for the Knicks, we are seeing this unfold right before our eyes. Between rumblings that Evan Fournier will start and the high likelihood that Derrick Rose will receive a large minutes load, it would appear that Thibs did not learned much from last year’s blunders and will be too veteran-dependent, as he’s been in the past.

I don’t think there is an exact threshold of wins Tom Thibodeau needs to be at in order to continue on as the Knicks head man, although the fact is, the Knicks’ current roster is definitely talented enough to make the playoffs and at least some noise while there. If New York falls short of those expectations, Thibs may well be walking out the door.

R.J. Barrett as the franchise cornerstone, Obi Toppin as the high-flying electric forward, Immanuel Quickley as the talented floor general, Mitchell Robinson as the rim protector, and Quentin Grimes as the three-and-D stud make for one of the most exciting cores of homegrown, under-25 talent in the Association.

Through all the ups and downs of the past few years, drafting has been the strength of this team and the pieces are in place for the Knicks to be a successful, playoff-bound team. Regardless of what you think of Leon Rose – and yes, he deserves criticism for how he has handled things – he has loaded the roster up with young talent. Now the responsibility falls on Thibs’ shoulders to manage them correctly and give them the opportunity to help this team to the promised land.

It would be one thing if he didn’t have young talent to work with, but the aforementioned players, plus Cam Reddish if you want to throw him in there, are all proven to be capable NBA players who can truly make an impact and spearhead the renaissance of Knicks basketball. Even if you take R.J. and Mitch out of the equation for a second, as they will be starting and signed hefty extensions in the offseason, the three so-called “x-factors” of this team of Toppin, IQ and Grimes have all shown brilliance at times and have also been victims of Thibs’ coaching malpractices, particularly last year.

All three, when given the chance, showed improvement year over year and flashes of greatness, but none were fully unleashed, a disservice to them as they are the present and future solutions to a team that is looking to be consistent contenders.

Fans have long been clamoring for these three to get more burn, but instead, they were often on the bench in moments where they could’ve been playing and developing, while Julius Randle, Fournier, and Nerlens Noel were out there and not producing to the necessary level.

Thibodeau’s management of his roster has paled in comparison to other coaches in the East like Erik Spoelstra, Nate McMillan, and even Doc Rivers, whom everyone loves to criticize. Young players like Tyler Herro and Tyrese Maxey have been given plenty of run and through on-court experience have developed quickly into very good players on championship contenders. These guys aren’t necessarily more talented than IQ or Toppin, they have just been put in better positions to succeed and therefore are viewed as better players.

Thibs’ main obligation, aside from stacking wins, is to prove that he has learned to prioritize giving his young talent the chance to reach their full potential and figure out how to balance the veterans who deserve to play with his under-25 guys.

»Read: The Knicks must choose, a star or development