Is This the Real Emmanuel Mudiay? 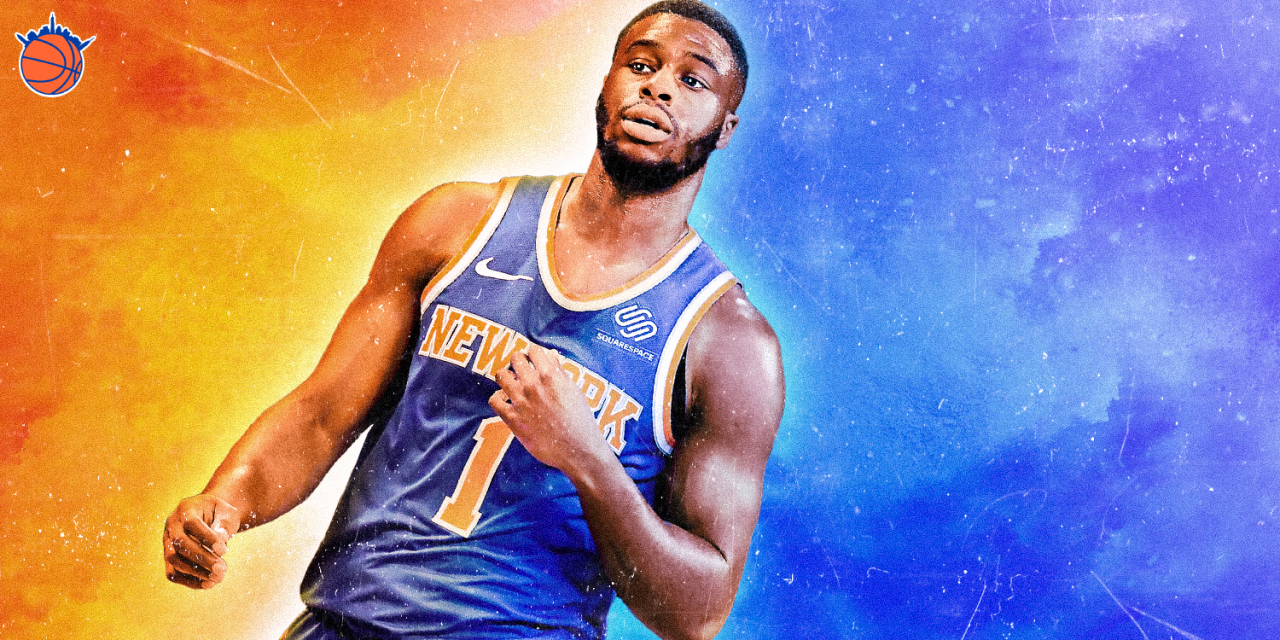 The great performance of Emmanuel Mudiay of late has catapulted the Knicks to a nice stretch of wins and comebacks—let’s figure it out if this is legit.

You brushed off the idea after the first game against New Orleans. He posted 19 points, seven rebounds, two blocks, and two steals. It was a decent line, to say the least—seemingly uncharacteristic of him. The two following games made you laugh. Anyone can shoot 5-of-8 from the field and then shoot 6-for-9 in the game after. All you could do was snicker sarcastically in order to hide your insecurities because admitting it would go against everything you knew about basketball. Then, the win against Boston happened. He only posted five points, what you’d come to expect, but a clutch defensive play left a lump in your throat. And now, after scoring 27 points, grabbing seven boards, and tallying four steals and two clutch buckets leading to wins against the New Orleans Pelicans and then the Memphis Grizzlies, you realize that everything has come full circle.

You have to come to terms with it, or, at least, raise the question. Is Emmanuel Mudiay… #Good?

Ten games—even a season—or fewer aren’t enough to concretely solidify Mudiay’s status as a “good” player, but it’s enough to analyze what he’s been doing differently.

One thing that’s consistently mentioned, whether to praise or to chastise, is the pace of the New York Knicks’ offense. Fizdale uttered the word “speed” once, and it’s been echoing throughout New York City since. With a current pace of 100.86, the Knicks rank 18th in the league (per NBA Stats). However, that’s still faster than any of the Denver Nuggets’ seasons with Emmanuel Mudiay as the floor general. Many teams are running an offense faster than ever before and the Knicks are no different. They haven’t had a pace this fast in recent memory either, despite the team’s slow pace relative to two-thirds of the league.

The Knicks pushing the pace is one of the major contributing factors to Mudiay’s recent success. Individually, Mudiay is operating at the fastest pace of his career, 104.26. Once upon a time a general rule of thumb was that players would “slow it down” to think and find their rhythm; however, it appears that Mudiay’s been benefitting from the discord of the faster pace. He’s averaging a career high in fast break points. His monstrous slam over Garrett Temple in the Knicks game against the Grizzlies is the perfect example of how he can be very effective during fast break opportunities. Mudiay is rarely the quickest athlete on the court, but the way he’s been on the break this season you wouldn’t be able to tell.

At 6’5” tall (with a wingspan ranging from 6’7” to 6’9” depending on who you ask) once he’s downhill, Mudiay trades in his point guard hat and becomes a slashing two-guard at the rim. Right now, he’s averaging 4.9 points in the paint per game—the most since his rookie season. Even more telling, is that he’s averaging around six fewer field goal attempts per game than he did that season while shooting a career-high 47.4 percent from the field. It’s unlikely he keeps shooting at that clip, but if he continues to shoot 58.7 percent at the rim, his numbers should look fine by the end of the regular season. To illustrate the magnitude of his jump in field goal percentage, understand that for the first three seasons of his career his field goal percentages were consecutively 36.4, 37.7, and 38.8, in chronological order. For all intents and purposes, Mudiay stank. There’s no way around it. In three years he didn’t even sniff a 40 clip, but now he’s shooting at a remarkably high rate, and his improved inside game is a large part of the reason.

It’s difficult to pin down what exactly has changed about Mudiay. What has he tweaked about his form? Has he created a hot spot for himself? It’s difficult to tell. His weight loss over the summer may factor into the equation somehow as well. It’s been reported that Mudiay lost somewhere between 10-15 pounds before the season began. For a position so reliant on speed and conditioning, fitness is imperative. In Mudiay’s case, his success may even depend on it. On this go ahead bucket, Mudiay showed tremendous finesse but also athleticism.

Mudiay trying to put the final nail in the coffin! pic.twitter.com/2Ktwg7HiQ7

Vonleh’s screen was essential to create space, and Mudiay used every inch of it—preventing Jrue Holiday, one of the best perimeter defenders in the league, from getting to the ball. He then made Anthony Davis, a true rim protector averaging 2.7 blocks per game, a goat by laying in a shot at the rim. That’s a tough, very clutch play in crunch time.

Another reason for his sudden success may be his diminished role. Over the last 10 games, Mudiay has averaged 22.5 minutes with a 22.5 usage rate, down from 24.3 the previous year and 22.6 in his final full season in Denver. The decrease isn’t huge here, but shared duties, along with monitored playing time, could be providing him with a safety net. Taking him out before he has the chance to be disastrous seems like a good idea.

Although a new coach, new digs, and a more mature player can all be seen on the court, what happens behind the scenes might have also played a part in Mudiay’s resurgence. After a win against the Pelicans, Fizdale said that he frequently gives Mudiay encouragement.

“I got a lot of confidence in the kid. I keep telling him that every single day. I got total confidence in you,” Fiz said. Coming from a leader, those words and that trust can serve as inspiration for a young struggling player.

It’s unclear why it’s happening, but it is indeed happening. In his fourth season in the NBA, Emmanuel Mudiay is playing well. The exact inputs that facilitated this change can’t be pinned down, and it’s far too early in the season to dub him a “good” point guard. Still, Mudiay has been on a pretty decent tear, and the only problem is figuring out if/how he fits on the Knicks past this year.