Ja Morant Is an Electric Guard Not Without Questions 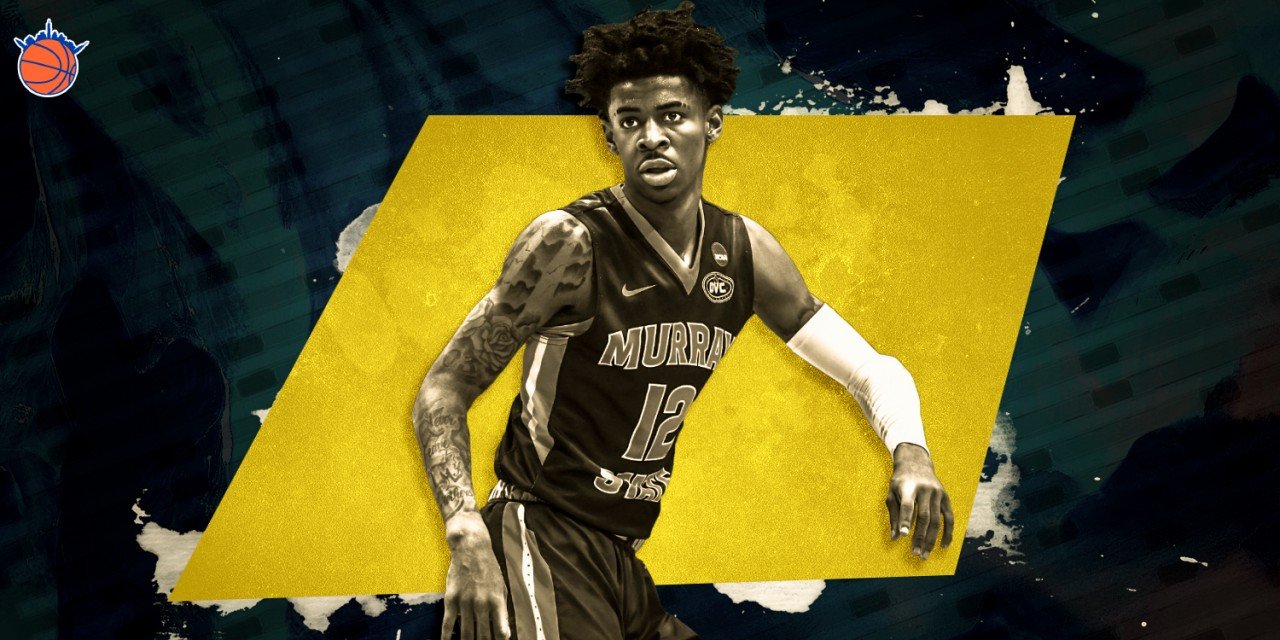 Ja Morant is seen as the consensus top point guard in the 2019 draft class. Despite their current depth at the position, should the Knicks take Morant if available at three?

The Knicks Wall is setting a spotlight on the top prospects in the 2019 NBA Draft. Follow along with weekly features on the draft and players. Next up is Murray State guard Ja Morant.

For a brief moment in time, the basketball world was waiting to see if Ja Morant could carry Murray State to the NCAA tournament.

Despite a 25-4 record entering postseason play, Morant and his Murray State Racers needed to win their conference tournament in order to secure a spot in March Madness, due to the team’s poor strength of schedule. Morant, carrying them this far, did it again, scoring 65 points and adding one game-winning shot in his two Ohio Valley Conference tournament games, leading the Racers to the NCAA tournament.

Huge And 1 for Ja Morant with Murray State on its heels in the final seconds. pic.twitter.com/BIasVcJwRB

And then, Morant followed it up with a triple double—17 points, 16 assists, and 11 rebounds—leading the Racers to an upset over Marquette in the first round.

For a brief moment in time, Morant looked like the best player in the draft. Even though the Racers’ run ended one round later at the hands of Florida State, Morant introduced himself to the big stage and alleviated any doubts about his status as a top three pick.

Morant has displayed the type of leadership, playmaking, and offensive creation the Knicks have lacked from the point guard position since the turn of the century.

Since then, the New York Knicks have rotated point guards with no qualms, largely because of the lack of talent at the position. Charlie Ward, Howard Eisley, Frank Williams, Moochie Norris, Chris Duhon, and Toney Douglas are just some of the players who laced up their sneakers and orchestrated the New York offense this last decade, mostly to stacked losses.

Even the bigger names, the Stephon Marbury, Steve Francis, Penny Hardaway, and Chauncey Billups of the world, didn’t last, or were caught at the tail end of their careers. You would have to go back to the days of Rod Strickland, Mark Jackson, and Derek Harper in the late ’80s and early ’90s to find stability at the point guard position for the Knicks.

Could Ja Morant be the one to stop the point guard carousel and man the roster for years to come as the team’s 2019 first-round pick?

In his final collegiate season, Morant averaged 24.5 points, 5.7 rebounds, and 10 assists—a marvelous display for a guard on any level. The Murray State Racers went as Morant carried them, as evidenced by his final week in their uniform. His electricity and ability to galvanize his teammates were on full display.

Until recently, it seemed like Morant was a lock at the second overall pick to the Memphis Grizzlies. He could be the pick when it’s all said and done, but Memphis has expressed interest in bringing in Duke guard R.J. Barrett for a workout and interviews. Then, this past week, Morant went under the knife for “minor knee surgery.” The surgery is expected to keep him out 3-4 weeks and potentially out of the NBA’s Summer League.

Could that minor knee surgery turn Morant into a Knick? Only time will tell.

Creation/Playmaking Ability: Morant’s best skill is his ability to create for his teammates. Averaging 10 assists on the nose this past season, Morant is good at finding teammates off the pick-and-roll and when getting to the basket. Several games this season saw Morant double- and triple-teamed; he sucked in the pressure and used his court vision to survey the floor and find an open man. He can be a bit loose with the ball, but Morant possesses all the skill to be an excellent lead guard.

Athleticism: Morant fits the profile of a big playmaking guard. He possesses good size at 6-foot-3, a solid 6-foot-7 wingspan, and elite leaping ability off of two feet. Between his ball handling when attacking the basket and his ability to create space when attacking the rim, Morant offers great craftiness and is shifty on the offensive side of the ball. He never appears to be out of control much at all, either.

Shooting Profile: Between his freshman and sophomore campaigns, Morant improved his shooting numbers, highlighted by his 36% shooting from three-point range.

However, Morant doesn’t offer an elite shooting profile, as pull-up threes and off-dribble shots aren’t his strong suit. For Morant to truly develop and evolve into an elite player, he’ll have to improve his shooting to go along with his solid finishing at the rim.

Defense: Part of it could be due to carrying the Murray State offense for games at a time, but Morant was outright awful defensively. On-ball, his athleticism shined, as Morant was able to stay in front of most opponents. His 1.8 steals per game also displayed Morant’s ability to read the passing lanes and turn mistakes into instant offense for his team.

But like most young players, Morant appears lost off the ball defensively, and at times, it didn’t even look like he was truly trying. Opponents were able to screen him out of the play, and he would often lose sight of his man while ball-watching, at times tracking the ball instead of his man. His overall aloof performances on defense could be due to how much he carried the offense, but Morant looked poor on that end all season.

Unequivocally, yes: Morant fits the Knicks. One of the biggest issues with the 2018–19 iteration of the Knicks was that it lacked a true creator—someone who could operate the offense and find teammates. Emmanuel Mudiay was good at taking advantage of space and getting to the basket but struggled in doing anything else, whether it was finishing or finding teammates off of the defense collapsing on him.

Based on his two seasons at Murray State, Morant has a bit more balanced in that regard, and that would help a Knicks team that offers several different kind of players to work with. Imagine the look on Mitchell Robinson’s face when he sees that he has an adequate pick-and-roll partner, or Kevin Knox when he realizes that he has someone who can create for him? It makes everyone’s job easier.

That said, there are some questions New York will have to answer before potentially selecting Morant.

New York turned Kristaps Porzingis (sorry for cursing) into Smith and several draft picks and despite poor shooting and a back injury, Smith also offered that shiftiness in getting to the lane and even turned a corner as a defender. Are the Knicks in position to be redundant with the roster and take Morant? It’s a legitimate question based off of what Smith cost you to acquire.

Looking at today’s game, it’s important to get solid wing players. Between Duke’s R.J. Barrett and Texas Tech’s Jarrett Culver, the Knicks have a chance to add a young, cost-controlled wing player who could better help a team looking to make an expensive leap into free agency. If the players are equal or close to equal in draft grade, it might be imperative for New York to take the wing player, as they’re tougher to come by.

This is where the Morant to De’Aaron Fox comparisons fall short. Both are lightning quick with the ball, good at setting up open teammates, and offer that tenacity and swagger that a man with the ball should offer. That said, Fox was an elite defender in college and a promising one in the NBA. What if Morant never gets there? It would hamper his upside quite a bit.

What if Morant is merely an offensive-first lead guard? It makes him a rather tough fit, unless he’s an elite offensive player. The likes of Kemba Walker, Russell Westbrook, Damian Lillard, and others come to mind—a centralized offensive weapon, who might need the defensive pieces around him to be maximized to go anywhere.

Ja Morant has the skill set to be an excellent lead guard: solid ball-handling, good size and the craftiness to create for teammates and get to the rim. While New York has other needs and larger question marks on the roster, Morant might be too good to pass up if he were to fall to the third overall pick.

»READ: Darius Garland: Will the Vanderbilt guard be the draft’s sleeper pick?