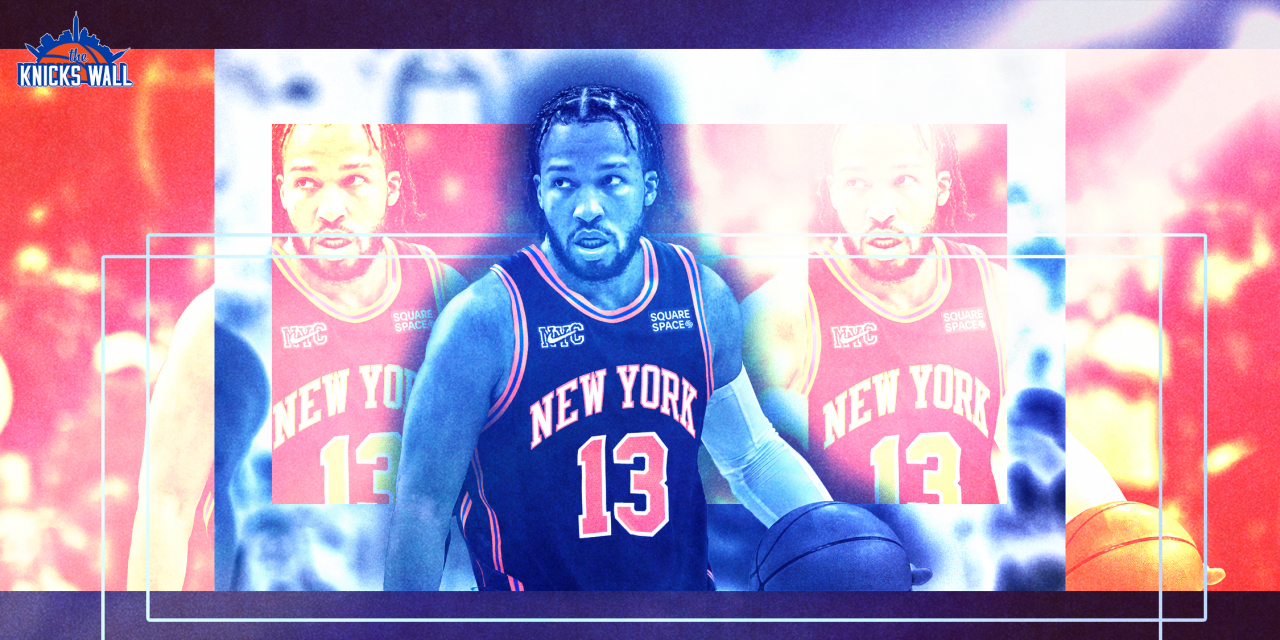 No matter what happens next, the Knicks definitively signed a productive contributor at point guard in Jalen Brunson, although there are some questions about best maximizing the Villanova product on this current roster make-up.

On Thursday, the opening night of 2022 NBA free agency, the New York Knicks agreed to a four-year deal worth $104 million for Jalen Brunson. Brunson, 25, is coming from the Dallas Mavericks where he had a breakout season—16.3 points, 4.8 assists, 3.9 rebounds, and 58.3 TS%. The former Villanova guard is making the switch from Dallas to New York after his father, Rick Brunson, was hired as an assistant coach, and his agent, Sam Rose, has ties to the Knicks front office, as his father, Leon Rose, is the Knicks President of Basketball Operations.

The Knicks were dunked on for pushing hard for Brunson, and it’s tough to understand why. The Knicks floated throughout the league with various point guards for, well, the last 40 years. More specifically in the Leon Rose era, from Elfrid Payton and Derrick Rose manning a 41-win team, to Kemba Walker and Rose struggling last season, to the late-season tease with Immanuel Quickley to close out the season, the Knicks were caught between giving Quickley the job outright or signing someone to upgrade the position; the Knicks chose the latter.

And for all things considered, this is a good move for a team that needed a point guard.

Brunson gives the Knicks stability at the position, but more importantly, an offensive scoring threat. Brunson has improved his shooting from his days at Villanova, shooting 37% from three this past season and 40% in 2020–21, albeit on a smaller sample than you would like (452 total attempts). Where Brunson’s true skill comes into play is his ability to combine selective outside shooting with impressive work in and around the arc and an element of creation to a Knicks rotation lacking just that in the starting unit.

The ability to drive and attack the rim is valuable and, ultimately, the skill that made Brunson highly desired. When the Knicks acquired Walker to pair with Rose, it was with the idea of two players attacking the rim in mind. Brunson can be that player. Last season, among players who played at least 50 games and averaged at least five drivers per game, Brunson was 16th in drives, sharing a load with Luka Doncic and Spencer Dinwiddie. However, per NBA.com’s stats, Brunson finished seventh in field goal percentage at 56.7% on drives. A glance at Brunson’s data as a pick-and-roll ball-handler and Brunson finished with a 1.04 PPP, good for the 90th percentile in the league.

In the 2021-22 season 29 NBA players attempted at least 100 floaters. Of that group, Jalen Brunson ranked 1st in efficiency, converting 52% of his attempts. pic.twitter.com/fTAU2v8YKl

This is a player who, despite playing with one of the most heliocentric players in the league, thrived when attacking the basket and having the ball in his hands. The target of Doncic and his reality-bending gravity is gone, which could alter the numbers, but through his first four seasons in the league, Brunson has been an effective slasher and offers New York’s offensive attack a new element.

The defense is a concern, but he’s not a complete zero defensively. Brunson is 6-foot-1 with a 6-foot-4 wingspan, eliminating the idea of him being a versatile chess piece at Tom Thibodeau’s disposal defensively. However, Brunson is a smart player, capable of being in the right spot when needed. Giving him the proper defensive reinforcement, guys like RJ Barrett, Quentin Grimes, and (a returning?) Mitchell Robinson will be key to keeping him from being targeted too often.

The next step is (most likely) moving on from Julius Randle

The addition of Jalen Brunson makes sense, nevertheless, it’s tough not to still have concerns about the starting lineup. Whether it be Evan Fournier or Quentin Grimes, the Knicks could use an upgrade at the shooting guard spot. However, the reason for these questions largely has to do with Julius Randle’s fit alongside Brunson.

It’s easy to point to the 2021–22 season, one where Randle struggled after December and his erratic behavior only exacerbated a down season. The three-point shooting went back to his (poor) career norms, the defense disappeared and the guy who Thibodeau can lean on, ultimately, self-destructed. Between RJ Barrett’s development and incremental need for more of the offensive pie and now, the arrival of Jalen Brunson, opening that power forward/second big spot for someone a bit more secondary should be the goal.

The alternative is swapping Randle out and giving more minutes to Obi Toppin and Cam Reddish, as both players fit more around an offense built with Barrett and Brunson in mind. Toppin understands being a secondary offensive threat, but it doesn’t stop him from working on both sides of the ball. The former Dayton Flyer is more than capable of thriving as a junkman—capable of attacking the rim, working hard on offensive rebounds and tip-ins—while also a willingness to be a corner-three shooting option.

Reddish, on the other hand, offers a different dynamic—even in flashes. The defense has varied from solid to great, and in a world where New York wants to switch more and be more aggressive defensively, having Reddish capable of defending positions 2-through-4 can help make that a reality. He’s shown the ability to be an off-ball offensive option but still has enough juice to attack closeouts or work in the midrange. Toppin should get the starter’s role, but Reddish is versatile enough to be available big wing in New York’s rotation.

Moving Randle, even for a small asset, would be a bountiful return for the Knicks. At this stage, the Knicks have the two offensive hubs in mind and the supporting players around them to make things interesting. Unless Randle is willing to make another adjustment in his game, that of a more off-ball scorer, driver, and mover of the ball, the rotation gets a bit gummy with him in the offense and could hold New York’s roster and success back.

Brunson and Barrett make some sense together

When word of Brunson’s arrival made its way through social media, the first young player thought about was Immanuel Quickley. The second-year Kentucky guard played well in his end-of-season stint as the lead guard, but the arrival of Brunson made many things about his projected role in New York, and whether the organization sees him as just a bench player, if not a trade piece to their next move.

While Quickley was viewed as a “loser” here, I want to express just how much RJ Barrett was a “winner” in this situation.

Last season, Barrett took a step forward in his offensive role, commanding more shot attempts and kicking his usage into hyperdrive after the all-star break. There was some good in that, as his 46-point performance against the Miami Heat or his back-to-back 30-point games where he looked like a player taking another leap. However, there were some rough spots, highlighted by his woeful efficiency numbers. Of the 28 games where Barrett took 20 field-goal attempts or more, he only shot 50% or more in seven of them. It’s not what you want.

Brunson offers Barrett two things. The first is an offensive safety net. Whereas last season’s safety net (we’ll get to him) broke on Barrett, Brunson’s combination of shooting and attacking with Barrett’s skill set just makes sense, even if the two will be duplicative in their spots at times. Both are lefties that love the mid-range, love the right side of the floor, and are just limited enough offensively to where they can get stuck in the middle of the floor on drives, but Brunson has been a better finisher in his career.

The second is getting Barrett back to some of his off-ball success. Two seasons ago, Barrett finished with 40% shooting from the outside, largely off the strength of his catch-and-shooting ability (41.0% on catch-and-shoot threes in 2020–21). In 2021–22, Barrett was at a respectable 36.8%. Now, with someone who can create some gravity in the starting lineup again, Barrett can regain that ability as a corner shooter, but also add some driving elements into his game.

I’m curious to see the conversation about Barrett now as New York attempts to build the roster up, but the fit with him and Brunson seems like a good one New York can lean on at times.

The New York Knicks added a talented player in Jalen Brunson, regardless of how people view the financial aspect of the deal. Brunson’s game suggests that of a player who can attack the basket, generate positive offensive possessions, and most importantly, move the Knicks into another stratosphere basketball-wise. While there were concerns about him and Immanuel Quickley, I ultimately believe the two can play together and play well, thanks to Quickley’s shooting and defense.

There’s talk about what the Knicks can do next, where will the Knicks go from here, and conclusively, how this help New York in its pursuit of a star player. We can worry about the next moves later, for now, the Knicks got a talented basketball player and the fans should be excited.