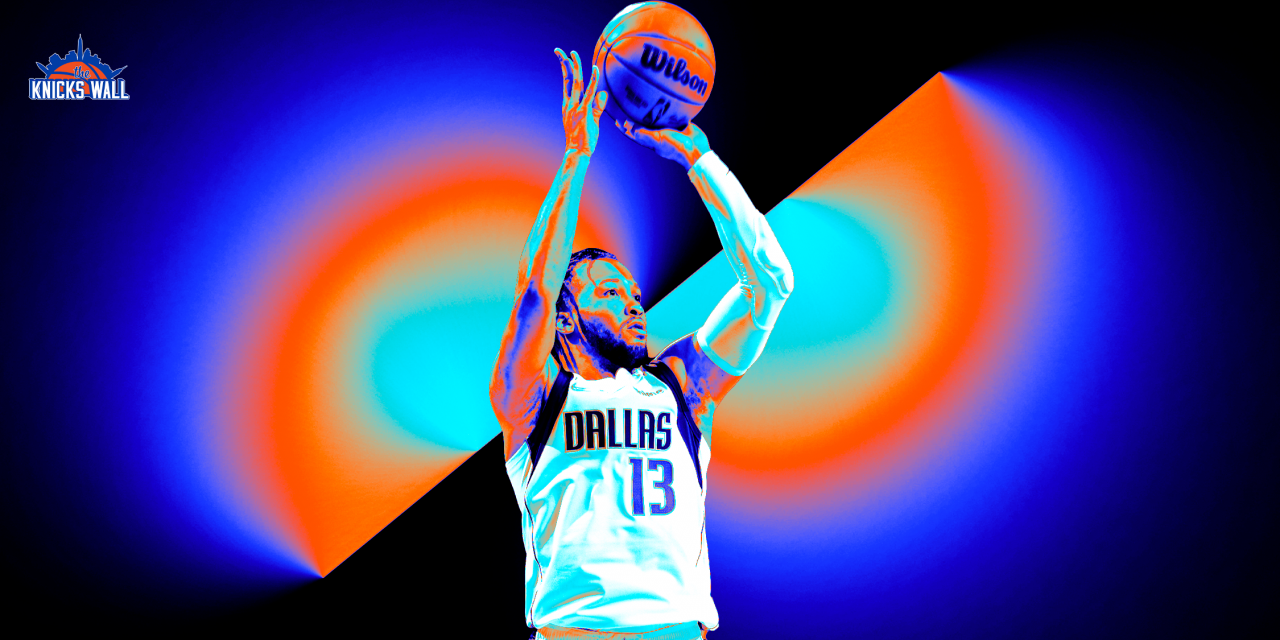 Jalen Brunson will help the Knicks in a lot of ways. One area of the game in which he can help the team — and himself — the most is 3-point shooting.

With the Cleveland Cavaliers trading for Donovan Mitchell late last week, the New York Knicks are moving towards smaller moves, like potentially finding homes for veterans such as Derrick Rose, Evan Fournier, and Julius Randle. It also means, for now, that Jalen Brunson will end up their most significant offseason addition, signing the former Dallas Mavericks guard to a four-year deal worth $104 million at the beginning of the offseason.

However, that might not be a bad thing. Brunson, just 25 years old, still offers New York a considerable upgrade at the point guard position, thanks to his ability to run an offense and manipulate defenses with his array of different moves around the basket and his overall slashing ability. His gravity will be a bonus on a Knicks team with several players with a moderate weakness at attacking a balanced defense.

But there’s room for improvement for Brunson. What if he were to take more threes?

Before discussing his shooting, the slashing and rim driving ability must be reiterated; he is really good at finishing at the rim. Brunson’s data as a pick-and-roll ball-handler is solid and Brunson ultimately finished with a 1.04 PPP (points per possession), good for the 90th percentile in the league last season, and shot a staggering 69.8% at the rim.

But the shooting is what intrigues and what he could push Jalen Brunson to another level.

Last season, Brunson shot 37.3% from the outside with an impressive percentage of 37.3% from three for his career. However, Brunson didn’t launch them with much aplomb; 3.2 attempts per game, 5.0 threes per 100 possessions. He’s moving away from a Luka Doncic-centric offense into an offense where he should be the “stir that stirs the drink,” and while his driving ability is the most valuable attribute, adding another valuable shooter into the mix works as well.

From an offensive standpoint, standard lineups with Brunson alongside, for example, Quentin Grimes, RJ Barrett, Julius Randle, and Mitchell Robinson, the more threes creates a balance with both Grimes and Barrett being stable shooters from the outside, while Randle and Robinson are more interior threats. On the pick-and-roll, Brunson is one of the best attacking the basket, but adding more off-the-dribble threes in his game would add more levity to his attacks and a bit more gravity to the rolling big man.

Is it unfair to imagine this in a Randle-less offense? Slot in Obi Toppin for Randle and suddenly, you have four potential shooters around Robinson, an ideal rim-running target. Toppin swaps some of Randle’s on-ball creation for corner three attempts and an affinity for getting the ball in the pick-and-roll. Brunson working with Toppin would allow him to take another step forward.

But more shooting from Brunson also works and activates more secondary lineups with New York’s other talent. Jalen Brunson and Immanuel Quickley can play together — Quickley being the talented shooter and defender to Brunson’s more pure point guard with a background of playing alongside higher usage players — but having both being threats to attack off the dribble, shoot threes at an above-average rate gives New York another level to their offense.

So what do Jalen Brunson and the Knicks look like if Brunson shoots more threes?

For the Knicks, it gives them more offensive flexibility with their lead scoring options. A combination of Brunson and Quickley allows better shooting options for Randle to kick out too. Both players can also bend a defense, with Brunson doing it well enough to open some more bent defense looks for Barrett. The defense is a minor concern and trade-off for the potential supercharged offense.

As for Brunson, this elevates him from a fringe top 100 player to someone who could receive some all-star consideration if all goes well. More importantly, Brunson, if he merely doubles his outside shooting while maintaining his efficiency, could be the player the Knicks need to take a step forward. And with no Donovan Mitchell on the horizon, Brunson giving them another solid player to assist New York in maintaining relevancy and proper building, is the best option for all parties.

Jalen Brunson is now shooting 41.8% on catch-and-shoot 3-pointers this season. He knocked down four total against the Lakers with one coming at a key point in the fourth quarter. pic.twitter.com/hm53tavSh5

In losing out on Donovan Mitchell, the New York Knicks will have to figure out how to take the next step forward. The answer, the one that’s least talked about, is the development of the players on the roster. That’s often Barrett (we’ll get to him), Quickley and Grimes. However, what about Brunson taking another step forward?

Jalen Brunson is slated to be the team’s starting point guard and while the rim pressure element is the most appealing part of his skillset, turning a solid plus, his outside shooting, into a legitimate strength, could take his game to the next level, and be enough to take the Knicks to another level, with a bit more consistency this go around.

»Read: Checking in on the EuroBasket Knicks

»Read: RJ Barrett’s Extension is a Win All Around