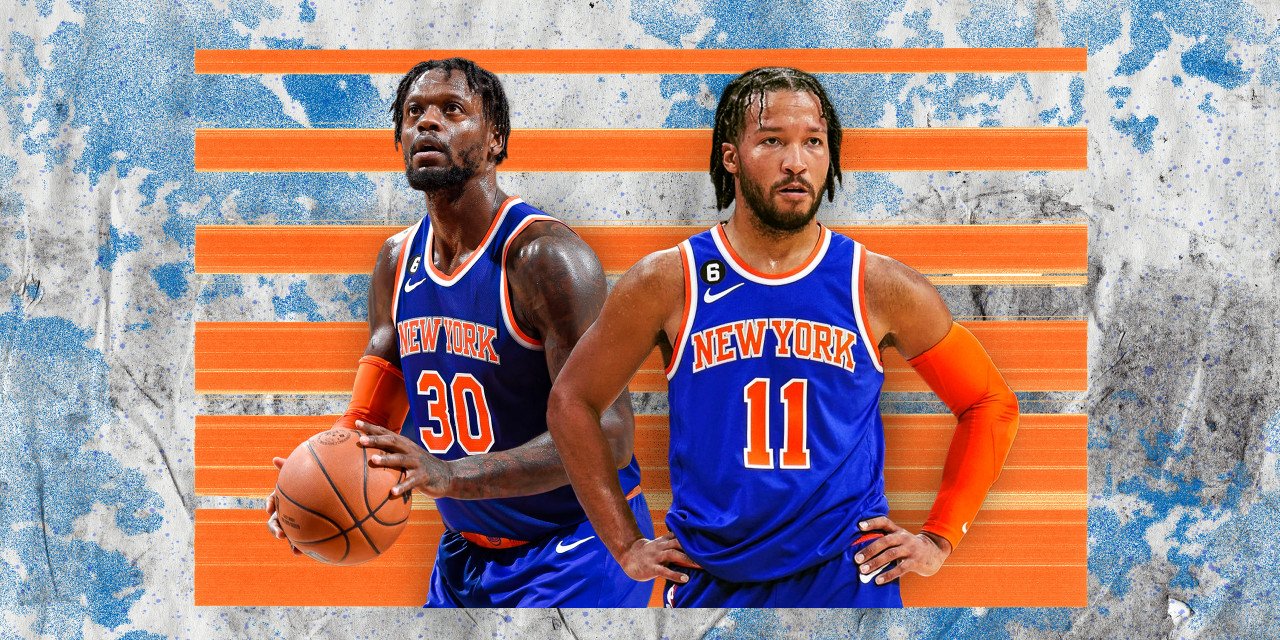 The Knicks’ addition of Jalen Brunson is already benefiting Julius Randle, who can focus on quality over quantity on offense now.

Julius Randle arrived in New York for the 2019-2020 NBA season, the season prior he had ranked in the top 20 in isolation plays per game, and since becoming a Knick, that number’s only increased. He was 14th with 3.2 during 2019-2020’s COVID lockout-shortened season, before peaking with 5.5 isos per game – good for a top-five total in 2020-2021 – during the best year of his career. Then last year subsequently slipped to 4.9 last year, which was still good for the 7th most in the league.

The Knicks had success with the Randle-ball formula in 2020-2021. He was an All-Star, won most improved and the Knicks were the fourth seed in the Eastern Conference. Yet asking Randle to carry the entire offensive load was an unsustainable proposition, as proven by his and the team’s regression last season.

This reliance on Randle came in large part due to necessity. Since arriving in New York, he’s played alongside point guards such as Elfrid Payton, Frank Ntilikina, Dennis Smith Jr., and the shell of Kemba Walker, forcing Randle into being the lead ball handler and centerpiece of the offense. As the frequency of possessions indicates, he hasn’t shied away from the role.

During this past offseason, the Knicks’ addressed this revolving door by inking 26-year-old Jalen Brunson to a 4-year, $104 million contract despite concerns about paying the New Jersey native such a large deal considering his small stature and defensive shortcomings. However, in fewer than ten games, Brunson has established himself as a much-needed stabilizing force for the Knicks offense.

Brunson is averaging 19.2 points and 6.8 assists per game, both of which would be career highs. But most notably, Randle’s usage rate peaked in 2020-2021 at 28.5 but has hovered between there and 27 in his other two years with the Knicks. This year, with Brunson available to share the offensive initiator duties, Randle’s usage rate has dropped to 26.0%, still the most by any qualifying Knick, but by a smaller margin.

Taking the ball out of his hands hasn’t fully achieved the intended results, but the signs are there. A cold stretch from three paired with a small sample size can make it hard to extrapolate further out, and at this point, a hot shooting night (like he had against the Timberwolves and Nets) can spike the percentages. Randle’s at 34.1% on catch-and-shoot threes and prior to the Nov. 7th game, he was at 29.4%.

In his All-Star season, Randle hit 41.7% of those attempts, but that season was sandwiched between years where he shot 31.2% and 30.1%. While the 2020-2021 season may have been an outlier, his current percentage is likely closer to what fans should expect. There’s no way that he’d shoot worse off of catch-and-shoot threes with Brunson feeding him than he did with the likes of Payton and Ntilikina kicking out to him.

Additionally, until Monday’s game in Minnesota, every single one of Randle’s made threes has been assisted (that number dropped to 88.9% afterward). Pairing this fact with his sub-30 catch-and-shoot three-point percentage may imply that Randle’s trying to find a balance between creating for himself and allowing the ball to find him. His All-Star line of 24/12/6 on 45.6%/41.1%/81.1% may not be attainable again, but expect him to settle somewhere in the in-between; and for the Knicks’ sake, hopefully soon, as when the offense has flowed through him, it’s been more of a sputtering surge than a flow.

While for the first time in his Knicks career Randle is outside the top 20 in isolation possessions with 3.4 per game, those possessions that he has had have been especially egregious. Perhaps because he’s feeling his grip on the reins of the offense slip, Randle has been forcing things. Through these first nine games of the season, Randle has the third-highest turnover frequency on isolation plays among players who have at least two such players per game — and while not quantifiable, they do seem particularly deflating. In part because Brunson had 17 turnovers in these first ten games and has three games without a single turnover.

Every time “Beyblade Randle” returns it feels like the entire squad regresses. There is so much more talent on this team than there was only a few years ago when the team required Randle to eat possessions, so while there are fewer moments where Randle clears everyone out, it feels more like a wasted opportunity. Randle has had the keys to the offense for a few years now, occasionally he let RJ Barrett or Derrick Rose take it for a spin, but until Brunson arrived there was never any doubt they’d come back to him. Now (to mix metaphors) he has a copilot and, while there has been/will be an adjustment period, it’s safe to anticipate blue skies ahead.

»Read: The Anomaly: What to Make of the Knicks’ Wonky Play

»Read: Cam Reddish Cannot Be the Odd Man Out