Dolan ‘Selling’ the Knicks and the Possibility of Micro-Managing 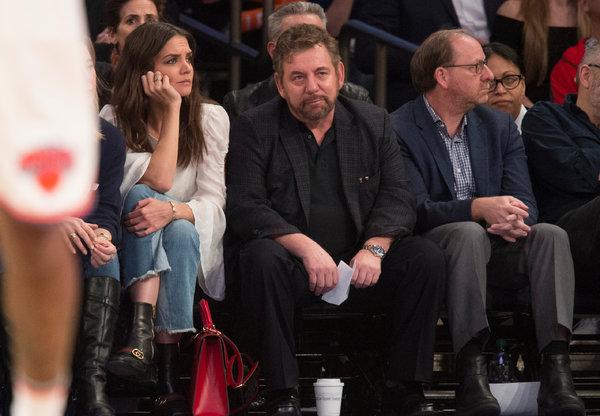 After making headlines in an interview with ESPN, Knicks owner James Dolan revealed selling the team isn’t out of question. But Dolan has stayed away from the team and spent money unlike other executives.

Be careful what you wish for Knicks fans, you just might get it.

In an interview with Ian O’Connor of ESPN, James Dolan, the kazoo-playing owner of the New York Knicks, talked about a huge breadth of issues. From Phil Jackson to Donald Trump, Dolan was an open book; however, there was still one topic that stuck out to Knicks fans above the others: the possibility of Dolan selling the team.

“You don’t invest hundreds of millions of dollars in a stock because you’re a fan … I could never say that I wouldn’t consider selling the Knicks,” he told O’Connor. “As the head of the public company, you can’t say you can’t sell, because then you’re telling your shareholders that your own personal feelings about your assets are more important than their money.”

During his nearly two-decade tenure as the head of the Knicks, there have several incidents surrounding the Dolan and the that have ranged from embarrassing to despicable. Coupled with the general mismanagement of the basketball team, a perceived culture of toxicity and a constant near-pathological urge to hamstring their future while attempting to “win now,” there’s no mystery as to why many Knicks fans are eager to see the team sold.

Yet there’s no guarantee that the grass will be greener on the other side.

Despite only one trip to the second round of the playoffs since 2000, the Knicks future is looking brighter than it has in a while. The have all of their future draft picks, young players like Kevin Knox, Frank Ntilikina, Mitchell Robinson, and Allonzo Trier have shown glimpses of their future potential and the 7’3” shadow of Kristaps Porzingis towers over the team waiting in the wings to return after tearing his ACL last season.

Additionally, Dolan appears to have taken a back seat when it comes to making basketball decisions in recent years. He let Phil Jackson run wild as team president, and while that turned out to be a very bad thing, he resisted the urge to publicly meddle as he had previously so many times before.

Now Steve Mills and Scott Perry are running the show and there seems to be an air of positivity unlike anything New York has seen in a while. Head coach David Fizdale is very popular with many of the league’s biggest stars—minus Marc Gasol—and has repeatedly said that building a new franchise culture is a major goal.

When a contingency of Knicks fans at the Barclay Center for the 2018 draft chanted for Michael Porter Jr.—bad back and all—Dolan didn’t bend. He let Mills and Perry take Knox, a skinny 19-year-old instead of the player who had once been considered the year’s best prospect. Then they snagged Robinson, who didn’t play organized basketball the year before. Dolan let Mills and Perry do their jobs and it’s worked out so far.

Throughout his tenure as the owner of the franchise, Dolan has made bad basketball decisions and forced players to indulge his comical blues band fantasies, but he’s also spent money. For everything bad you can say about Dolan, he hasn’t been cheap. There’s no guarantee that could be said for a new owner.

Oklahoma City broke up a core of Kevin Durant, Russell Westbrook, and James Harden to avoid the luxury tax. Imagine the pain of losing a hall of fame player solely for for financial reasons.

Dolan sees the Knicks for what they are, an investment, but he is also a fan. “I love the Knicks and Rangers,” he said in O’Connor’s interview. That love has lead him do make awful short sighted moves, but it’s also what spurred him to let other people take over. “I got more involved than I certainly am now. But the more you get involved, you start to learn what you don’t know.”

There’s a chance that a new owner is the last step towards making the Knicks the destination they should be. Maybe Dolan selling would be the start of a new golden age for New York basketball, but it could just as easily disrupt the progress that the franchise has made over the last few years.