Is James Wiseman a (Sneaky) Good Fit on the Knicks? 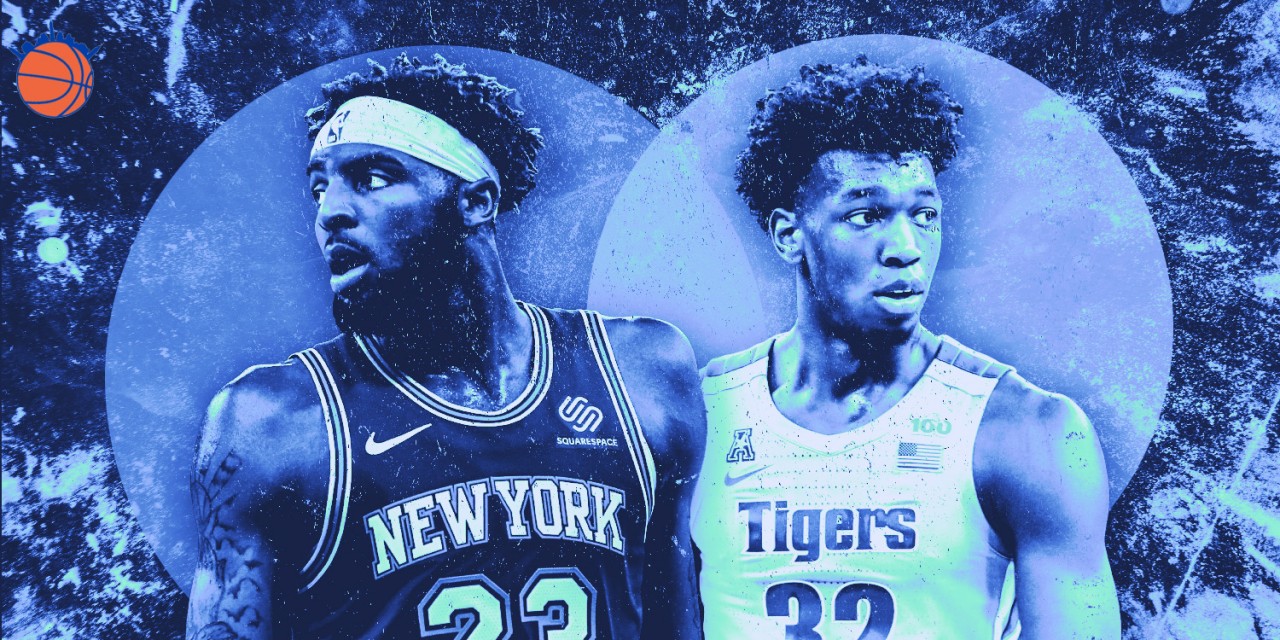 Upon first glance, James Wiseman big man is a poor fit on a Knicks’ team featuring young center Mitchell Robinson, but the two may actually be able to co-exist.

If there’s any mantra that doesn’t apply to the New York Knicks in recent years it’s “go big or go home.” Because the Knicks have been going big and going home.

The Knicks have, by and large, been reluctant to adapt to the league’s shift to small ball—ironically, after being one of the first teams to adopt it back in 2012–13 when they set a league record for three-pointers made and actually won a playoff series. As a result, their plodding lineups have been a huge factor in them missing the playoffs for what is set to be seven straight seasons. From the Andrea Bargnani acquisition to Robin Lopez manning the pivot spot alongside 7’3″ Kristaps Porzingis to today’s ill-fitting combination of Julius Randle and Mitchell Robinson, the Knicks have had no shortage of dual big-man lineups. And clearly, the results haven’t been pretty.

Of course, we still have to finish the 2019–20 NBA season, but the Knicks (deservingly so) weren’t invited to the Orlando bubble, so they’ll look towards the draft. Well, at least after they hire a head coach.

One of the more intriguing prospects of this upcoming draft is former—and we use the term “former” loosely—Memphis center James Wiseman. Wiseman notoriously played just three games for the Tigers after getting caught up in an eligibility scandal. Despite playing in three games, however, he’s still considered arguably the most talented prospect in the upcoming draft. Clearly, he has some major question marks surrounding his draft status, but the ability is there.

That, of course, is why the Knicks might think twice about passing on the big man if he falls into their lap on draft day.

Room for Another Big?

Look, I get it—the Knicks should probably make some sort of an effort to quell their bizarre affinity for power forwards and centers. If last year’s free agency debacle taught us anything, it’s literally that. But having a couple of seven-footers with modern skill sets could somewhat poke a hole in that notion.

Unlike Wiseman, most of the Knicks’ big man acquisitions—at least outside of the Porzingis draft pick—have been players with antiquated skill sets. Bargnani couldn’t guard a four-man to save his life (or dunk from the free-throw line, for that matter). Robin Lopez was a true, back-to-the-basket center in every sense of the word. Kyle O’Quinn wasn’t a shooting threat; neither was Willy Hernangómez.

Joakim Noah was, well, whatever this is.

Julius Randle is a post-up, old-school power forward and undersized five, and really, so is Taj Gibson. Bobby Portis can shoot, sure, but he can’t guard fours or fives, and he basically plays on the perimeter like he’s Nuggets-era Carmelo Anthony (spoiler alert: he’s not). On the other hand, a guy like Wiseman, a rim-running, athletic, 7’1″ center with a promising shooting touch, is a refreshing change of pace.

I know what you’re thinking, and yes, New York does already have a player like that—his name is Mitchell Robinson and he’s pretty much my best friend. Still, it could be interesting to see Wiseman and Robinson on the floor together at the same time (unlike Robinson and literally every other big man I just listed).

Wiseman and Robinson do have a few distinct differences in their games. For starters, Wiseman is already more of a polished shooter. Or at the very least, a willing one. Despite his outrageous 9’6″ standing wingspan, the big man displayed a nice shooting stroke in limited minutes. It almost looks, dare I say, Chris Bosh-ian?

Wiseman projects to be a decent shooting big man in the NBA. At the worst, he’s Joel Embiid. At best, he’s Karl-Anthony Towns. Either way, he’s not Julius Randle.

While his 70.4% free throw percentage over three games isn’t anything to write home about, he does have a smooth release and a confident-looking stroke. He’s also athletic enough to put the ball on the floor at times, but that’s certainly not a strength of his. He’s a bit more developed in the lower body than Robinson, and you can see it through his powerful rebounding and resounding shot-blocking ability.

An Overlap in Skill Sets

Still, it’s not hard to point out the similarities in Robinson and Wiseman’s games, which could of course lead to an ill-fitting pairing. For starters, their strengths on offense both come as a vertical spacer. They’re similarly at their best when they’re rolling to the rim on pick-and-rolls, catching lobs, and finishing offensive put-backs.

On defense, they’re both clearly at their best protecting the rim. Like Robinson, Wiseman is a prolific shot-blocker. He’s probably a little more heavy-footed, surprisingly, which could cause a slew of problems on the perimeter.

Their fit is almost entirely contingent on their respective developments. Wiseman would have to become a respectable shooter, and it also wouldn’t hurt if Mitch unleashed “Three-Point Mitch” once in a blue moon. It’s not like he won’t already own the NBA season field-goal percentage record going into next season, anyway.

Mitchell Robinson shooting threes after practice. He made 3 in a row after I stopped filming pic.twitter.com/Pzx0OhoCHS

And while Wiseman didn’t look all that comfortable guarding in space last year, albeit in limited sample size, he does have the athleticism to theoretically guard the pick-and-roll. His counterpart, Robinson, has also shown an uncanny knack for blocking three-point shots, so he could feasibly guard the perimeter for short stretches.

There’s also the fact that both players are somewhat foul-prone. However, staggering the pair’s minutes could lead to having at least one elite rim protector in the game at all times, especially when one of them is in foul trouble. Instead of teams going on massive runs when Mitchell Robinson is out of the game, enter James Wiseman to pick up the slack, or vice versa.

Truth be told, we don’t know what the next trend in the NBA is going to be. A decade ago, nobody thought Mike D’Antoni’s small-ball could win a championship. It’s also safe to say nobody saw two small-ish guards like Stephen Curry and Klay Thompson leading the NBA into a palatable new style of play. But with the NBA constantly evolving, it’s only a matter of time before a new fad takes over the league.

In theory, the next logical step would be the Warriors, but on steroids. Not literally (but maybe?) on steroids, but essentially five seven-foot lights out shooters. Think the Monstars minus an intrusive alien version of Danny DeVito controlling them. The Knicks could be ahead of the curve simply by employing two athletic, legitimate seven-footers with modern skill sets in their lineup. They could also go big across the board with Frank Ntilikina, R.J. Barrett, Kevin Knox, Wiseman, and Robinson.

And while we are still, technically, in the small-ball era, teams have been getting bigger under-the-radar. The West-leading Lakers basically already have two seven-footers, Anthony Davis and JaVale McGee, in their starting lineup, not to mention a rejuvenated Dwight Howard off the bench. The center position has largely been considered Davis’ best position, but the team has thrived defensively with Davis playing alongside either McGee or Howard. Of course, they also have a guy named LeBron James throwing them lobs, but the idea is still intriguing for the Knicks.

The Bucks have the best record in the league, and they’ve managed to do it with Giannis—a transcendent big man in his own right—next to a legitimate seven-footer in Brook Lopez. Lopez has obviously turned himself into a lethal stretch-five, but who’s to say Wiseman can’t do the same? Modern problems require modern solutions. Plus, the Bucks employ a similarly deep rotation of big men like the Lakers, with Brooks brother—the aforementioned Robin Lopez—backing him up at the five. They also have a couple of hybrid stretch fours/fives in Ersan Ilyasova and former Hornet Marvin Williams.

I’m not saying the Knicks have to set their draft board on fire and trade up to draft James Wiseman with the first overall pick. Rather, if New York finds themselves in a Joel Embiid/76ers situation where Wiseman falls into their lap with a later pick, they shouldn’t pass on him due to roster construct. Worst case scenario, they can trade either Wiseman or Robinson down the line for draft picks or a player who’s a better fit for their roster.

The “best player available” philosophy is a draft strategy often employed in the NFL. But in the case of the perennially inept Knicks, the NBA embodiment of “beggars can’t be choosers,” it might be the “wise” decision to do just that.

Either way, I hope New York can nail their draft pick as well as I just nailed that James Wiseman pun.