Jaxson Hayes Is the League’s Next Rim-Runner 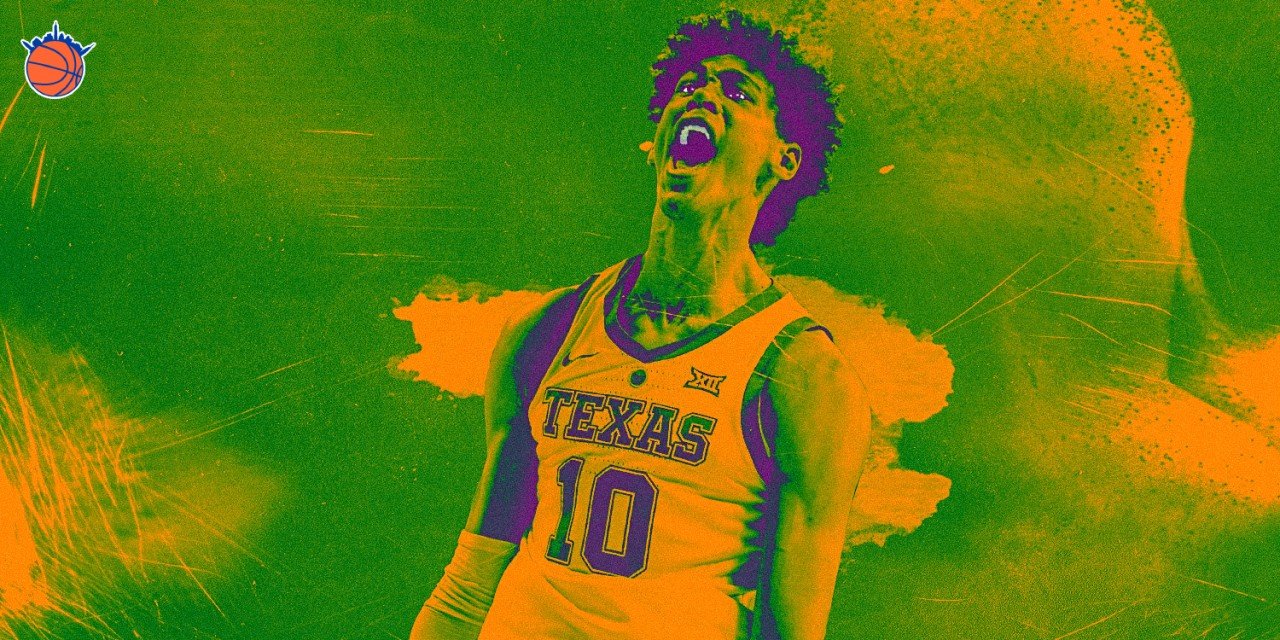 Jaxson Hayes won’t be an option for the Knicks at three, but he has the makings of a starting caliber center for years to come.

The Knicks Wall is setting a spotlight on the top prospects in the 2019 NBA Draft. Follow along with weekly features on the draft and players. Last is Texas center Jaxson Hayes.

With the NBA’s move towards a smaller, more position-less brand of basketball, the value of centers in the draft has never been so complicated.

Certain elite big man archetypes will always catch the eye and imagination of teams, but one that usually tends to slip down draft boards is the rim-runner. Even though virtually every team in the league could use a high level rim-runner, with the amount of big men available on the open market and trade block, and the need for elite wings and lead guards so common, using a high pick on a sub-elite big can sometimes seem like a poor allocation of resources.

But this year’s draft is an interesting case. Because of how tightly clustered the early-to-mid first-round talent is, and because of the dearth of high-end guard prospects, some bigs that would usually be late first-round picks are finding their way into the back end of the lottery, at least as far as projections go.

One such player is Texas Longhorn Jaxson Hayes. The 6-foot-11 19-year-old came off the bench for the first 11 games of his single-season career at Texas, but quickly made himself indispensable to the team’s identity on both ends of the floor.

As a long, fluid athlete with great hands and impressive rim protection instincts, it’s easy to see his appeal. He’s not in the same stratosphere of vertical explosiveness as DeAndre Jordan or Tyson Chandler (or Mitchell Robinson for that matter), but he’s much smoother than those guys.

Hayes was a wide receiver in high school before a massive growth spurt brought him to the hardwood, and the agility and shiftiness from those days shows up in unexpected ways for a guy his size.

I am not going to be able to get over this play. I don't care that Jaxson Hayes misses this layup, this is absolutely freakish for a guy who's 6'11"/7'0" to be moving like that pic.twitter.com/3DcBEnmwQQ

He’s got a strong motor that lets him get back for chasedown and weak side blocks, and while he’ll likely never be a shooter, he’s got a nice soft touch around the rim.

Pretty damn impressed that Hayes both caught and finished this. Has to get his head around sooner but isn't used to this over and drop pocket pass look. pic.twitter.com/Gq5RhIdDa0

Of course, like any other prospect, Hayes has his areas for concern as well. His main weakness at this point is exactly that: weakness. Listed at 220 pounds, Hayes is entering the league weighing in somewhere between Danny Green and Khris Middleton. He’s got broad shoulders that point to the possibility of putting on weight with time, but it will be a couple years before he’s ready to handle the behemoths of the league, few and far between as they may be.

Compounding that issue is the fact that Hayes’ instincts as a rim protector are very good, but they’re not elite. Like Mitchell Robinson early in the season, he has a bad habit of chasing blocks well outside his reach and gambling himself out of position, allowing easy looks at the rim, but unlike Mitchell Robinson, he doesn’t have ultra high-level quick twitch reaction time to recover after such a mistake. How he’ll eventually do guarding in space is anyone’s guess, but it will be a while before he can really be trusted outside of the paint.

Jaxson Hayes is the next in a long line of centers out of Texas that project to have real lasting power in the NBA. While in a normal draft he’d probably end up closer to the mid-20s range that, say, Jarrett Allen found himself in, whichever lottery team takes him will be getting a guy who comfortably fits into one of the most-desired big man archetypes in 2019.

The two questions that will determine just how far he can go in that role will be: 1) can he ever learn to shoot and 2) can he switch on the perimeter?

We’ve discussed the benefits and pitfalls of trading back in the draft before on The Knicks Wall. For most teams in the lottery, Hayes would be an ideal target, as he has a relatively high ceiling and a very safe floor. But even if the Knicks take that route, taking Jaxson Hayes would probably be a mistake.

Mitchell Robinson is the only true cornerstone on the roster as of a week before the draft. Investing a lottery pick in a non-shooting center with less defensive ability both at the rim and on perimeter switches than the guy they drafted last summer would be a waste of all the wing talent in this year’s draft.

In short, someone is going to get a real player in Hayes, but it shouldn’t be the Knicks.