Jericho Sims Will Have to be Patient in Knicks’ Center Rotation 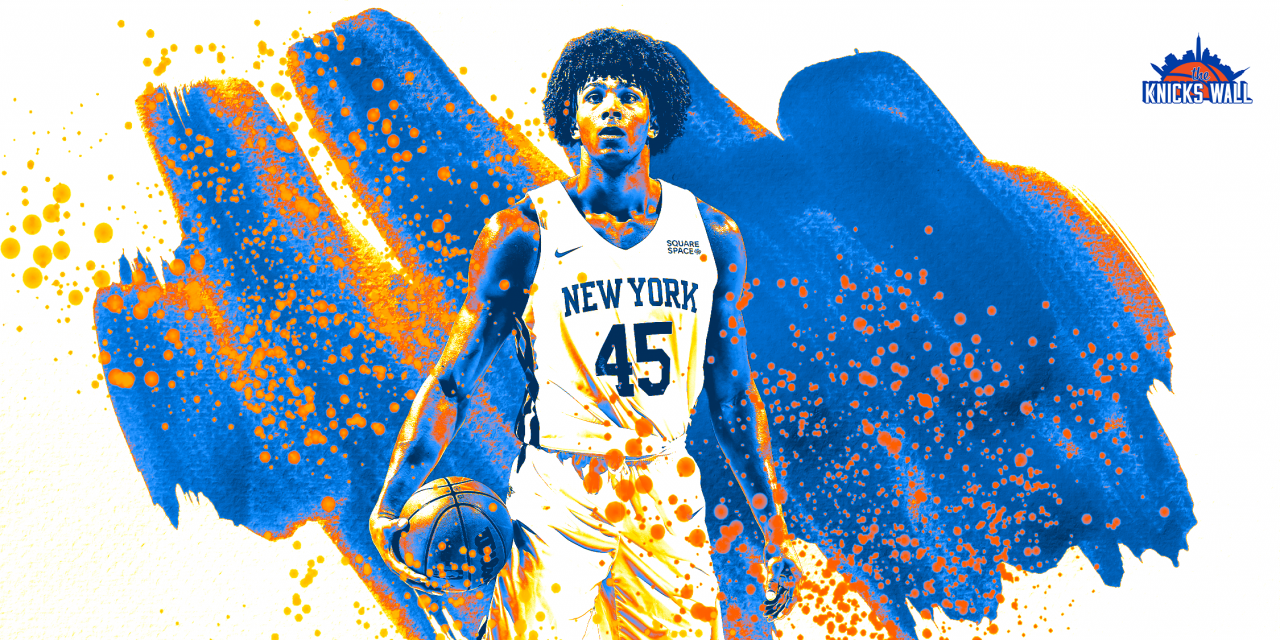 Jericho Sims signed a new, multi-year contract with the Knicks. His route to playing time, however, is blocked by older and better competition.

Of all the exciting young players on the Knicks, there’s always one that seems to be left out of the conversation. That’s Jericho Sims, the Texas Longhorns alumnus and 2021 second-round pick that the Knicks recently inked to a three-year, $5.6 million contract.

While he may not bring the excitement of Obi Toppin or Immanuel Quickley, Sims is a fundamentally sound classic center who’s athletic but most of all he’s durable, which is important since the Knicks have had health issues specifically at center for some time. He has a big body and clogs the paint. In his rookie campaign, he spent time between the NBA and the G-league.

Sims appeared in just 41 games in his first season with the Knicks. In his very limited 13.5 minutes a night, he averaged just 2.2 points to go with 4.1 rebounds. Sims did, however, take full advantage of his limited opportunity in Westchester. In the three contests he was suited up for New York’s G League affiliate the former Longhorn averaged a double-double with 14.0 points and 11.3 rebounds a night.

The former second-rounder joined the Knicks during a time when the team had a very deep big man rotation that included veterans like Taj Gibson and Nerlens Noel, who have since been released and traded, respectively. Naturally, his playing time would be scarce when those guys were available. Now that they’re gone Sims has the opportunity to move up in the depth chart and possibly be the primary backup to Mitchell Robinson, who the Knicks signed this summer to a new four-year, $60 million contract.

Sims, like many rookies and sophomores, headed to NBA Las Vegas Summer League to continue to hone their skills. He recently helped the Knicks’ contingent reach the Summer League’s championship game. Unfortunately for the Summer Knicks, they fell short of being crowned the first ever champions suffering a defeat to the Portland Trailblazers by the score of 85-77. The tournament was good for Sims as he heads into his second year of NBA duty. In the five games in Las Vegas, he averaged 11.6 points and nine rebounds per game while shooting an even 80% from the floor.

While a path to regular playing time seems evident for Jericho Sims, it may not be a given. The Knicks also added another big this offseason by signing Isaiah Hartenstein to a two-year, $16.7 million contract. Coming off a productive season for the LA Clippers as one of the better backup centers in the league, he looks to be Sims’ main competition for playing time this coming season. Hartenstein, who like Sims is a former second-round, is not only a more polished player but has been in the NBA three years longer despite only being months older.

Sims will have to earn his keep. Even though New York has moved on from the veterans he shared the same position with, he is still the most inexperienced big on the roster. Mitchell Robinson, now the longest-tenured Knick, is the starting center for the foreseeable future. Although the “Blockness Monster” has dealt with injury in the first few years of his career, this past season he remained relatively healthy after a couple of early bumps on the road.

Sims’ best chance at seeing significant time on the floor is backing up New York’s defensive anchor when he needs a breather. Minutes won’t come easy for him, though. Hartenstein can hold his own on both ends of the court. Apart from his defensive ability, he’s armed with the ability to pass and score the basketball. On occasion, he can shoot from long distance, a weapon many of today’s modern big men employ and something Sims doesn’t do. He will have to rely on the sheer athleticism and fundamentals he displayed last season and in his recent Summer League performances.

With some stiff competition early on, Jericho Sims may have to show a little patience before he sees steady playing time. But he can rest assured that the Knicks at least believe in his ability after signing him to a guaranteed contract.

»READ: Evan Fournier and the Value of Shooting Specialists in a Shooter’s League

»READ: What Does a Healthy Rotation Mean for Immanuel Quickley?