Jimmy Butler’s Trade Request Includes New York — What Do the Knicks Have to Offer? 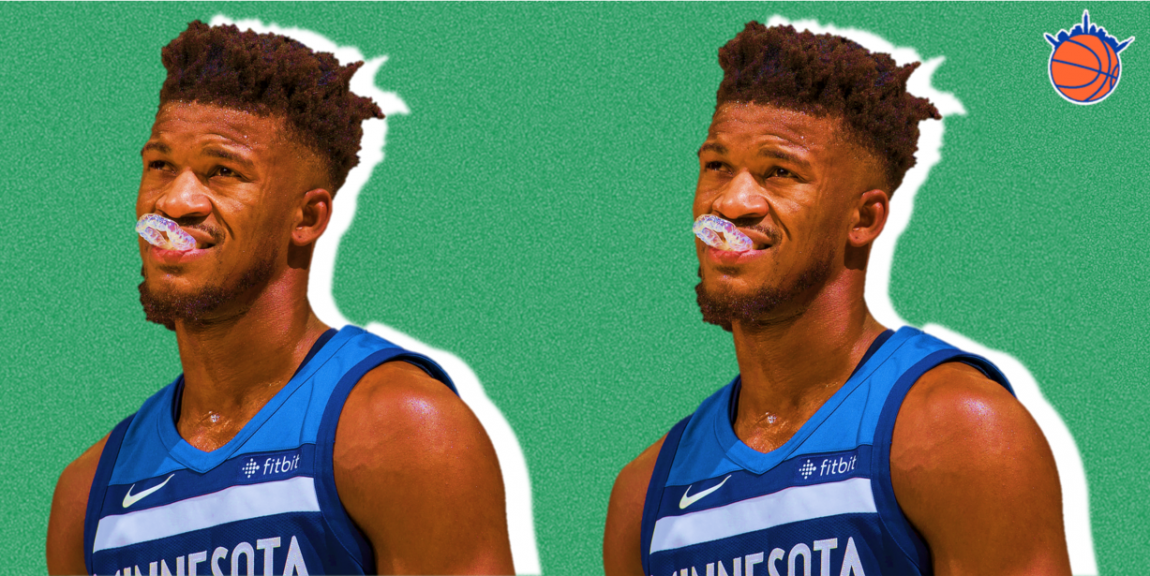 Dealing for Butler is incongruent with the Knicks’ current managerial philosophy of developing youth, but trading and extending the All-Star could lock up a special two-way player.

It looks like the NBA season is already underway—or maybe the free agency mayhem is ending with a bang. NBA insiders Shams Charania and Adrian Wojnarowski report Minnesota Timberwolves swingman Jimmy Butler is requesting a trade, with the latter ESPN representative adding the New York Knicks are on Butler’s short list of teams.

Butler has averaged 21.8 points, 5.7 rebounds, and 4.6 assists per game since the 2014–15 NBA season, along with 1.8 steals (via Basketball-Reference). He’s 29 years old, making Jimmy no spring chicken, but he’s a two-way player, comparable to rival Paul George when the two dueled on the Chicago Bulls and Indiana Pacers respectively.

The four-time All-Star has spent one season in Minnesota, and according to rumors that began as speculation but have proven to be true, it hasn’t worked out with Tom Thibodeau at the helm. Thus, Butler, a Thibodeau pupil in Chicago, desires to be traded. Despite reports indicating the Los Angeles Clippers as the number one destination for Jimmy Buckets, the Knicks remain an alluring layover for Butler’s career.

New York has been attempting to clear cap space for an All-Star-caliber player for quite some time, and the Butler situation may be the most advantageous to come along. Butler is under contract for one more season, and there are several favorable options for the Knicks, for example, completing a trade and signing him to an extension, or letting Jimmy walk after one year in the Big Apple.

The biggest question for the Knicks is how will they trade for Butler if the team is ham-strung with unfavorable contracts? And, (CAUTION: hypothetical imminent) if the Knicks were to give up an asset, what or who would it be?

Let’s break it down.

Butler is slated to earn $18.6 million this upcoming season with a $19.8 million player option in the 2019–20 season (per Spotrac). These are the approximate numbers the Knicks would have to return in salary. We haven’t even gotten to the talent Thibodeau—who acts as team president, too—would demand yet.

The Knicks would need to include a player of similar on-court value and salary. In light of recent events, guard Courtney Lee may be an initial sacrifice.

Lee is coming off of his best season in New York, one in which he averaged 12 points, 2.9 rebounds, and 2.4 assists. Obviously, Lee is a lesser player than Butler, but he’s a stellar role player who seemingly fits in anywhere. Courtney turns 33 in October, but, as mentioned earlier, Butler is almost on the wrong side of 30 himself. Lee’s got all his hair, so, what else do you want?

Arguably, Lee would fit in better with the Wolves than Butler. He’s a team leader and part-time decision-maker who rarely, if ever, steps out-of-bounds when it comes to play on the floor.

However, with Lee’s lower contract, the Knicks would need to supplement it with another piece. The player that immediately comes to mind as a trade piece is the longest-tenured Knickerbocker on the roster: Lance Thomas.

Thomas only averaged 4.1 points and 2.4 rebounds last season, but he did boast a 40.3 percent clip from three (only on 1.7 attempts). Thomas is a player much in the same vein as Courtney Lee; both are generally reliable 3-and-D specialists that are so well-liked that they’re eligible for sainthood.

Thibodeau, a noted defensive-minded coach and former Knicks assistant under Jeff Van Gundy, could be satiated with the idea of trading in his wayward long-time star for two high-effort role players who could fit in with his coaching style.

Another possible scenario is the Knicks trading away a different wing player, Tim Hardaway Jr.

The last time the Knicks traded Hardaway it didn’t exactly work out. However, a swap for a perennial All-Star is an all too different scenario.

While the salaries match up in a 1-for-1 trade, in practice the implications are much different. We know that Hardaway is overpaid. However, after assessing his performance last season, it’s not as awful as we originally thought. Timmy averaged 17.5 points, 3.9 rebounds, and 2.7 assists in 54 games.

Still, Steve Mills overvalued Tim Hardaway Jr., leading to the current predicament (roughly $54 million left on THJ’s contract). It’s highly doubtful that Hardaway would suffice alone, but, like Lee, Timmy’s diminished role on the Wolves is a plus since the WWF-sized egos on the team have been clashing from day one.

Realistically, the Knicks would need to add a valuable asset to secure a Butler-for-Hardaway or Lee/Thomas trade, but ESPN’s Ian Begley added an important wrinkle to the equation:

Worth noting on Jimmy Butler: Knicks president Steve Mills said at a fan event on Monday that the Knicks will not trade assets for players that they feel they can sign in free agency: https://t.co/QVqQ23vVxQ

This will be a very interesting test since @scmills declared they wouldn’t trade for a guy they’d be able to sign anyway. Very curious to see how this goes now.

Waiting it out may be the most likely course of action for the Knicks. If Butler sincerely wants to be a New York Knick, then he’ll find a way to make it happen by either exercising his player option in 2019 or waiting until the summer of 2020. Trading for Butler is incongruent with the Knicks’ current managerial philosophy of youth development, as Mills and Perry maintain, and keeping young players and draft picks as vanguards of their future.

Also, according to a report by ESPN, Thibodeau has no interest in trading Butler at the moment and would rather ride until the wheels fall off. The report continued to state that Butler would favor a trade to a team that would sign him a five-year, $190 million contract in free agency. He’d be turning 30 before the beginning of the season. If the Knicks have learned one thing from the Carmelo Anthony saga, as fun as he was, players don’t ramp it up after 30 (unless your name is LeBron James).

Alas, the Knicks may need to part with a current or future player in the hopes of acquiring Jimmy Butler this season.

I know: the Knicks would like to hoard draft picks like the Celtics or the 76ers, but it’s nearly impossible to secure an All-Star without offering a draft pick in return, especially since neither Lee nor Thomas is an equal to Butler on either side of the ball. A top-10 protected pick isn’t too bad of a deal. If Butler is truly the franchise-altering player fans thought he was in Minnesota, the Knicks are missing out on a middle-of-the pack draftee anyway.

A Butler for Hardaway + Frank Ntilikina package seems like a fairly formidable proposition, although it makes my tummy hurt. New York’s front office already asserted their commitment to building for the future. Ntilikina’s natural knack for defense and Hardaway’s offensive capabilities highlight their weakness apart, but together, if they develop a high level of chemistry, they could be a capable backcourt duo. Ntilikina’s—and arguably Hardaway’s—youth should be attractive enough for Thibodeau to pull the trigger on trading a player who won’t commit to his long-term plan.

Another alternative is pairing Hardaway and rookie Mitchell Robinson together. According to the NBA’s most recent Collective Bargaining Agreement, a rookie may be traded after thirty days from the signing date. Robinson was signed on July 8th.

Read the exact lingo in Article VII Section (d) (i) below:

No Draft Rookie who signs a Standard NBA Contract or
player who signs a Two-Way Contract may be traded
before thirty (30) days following the date on which the
Contract is signed.

The Wolves aren’t hurting for centers currently, but Robinson is at the very least intriguing since the team may look to run offensive sets with Karl-Anthony Towns at the PF spot. However, this only works if Robinson, the athletic marvel that we already know him to be, can actually shoot the three and defend, and Towns loses a bit of weight to alleviate his mobility issues. They may not be as pretty together from the jump, but Towns needs someone to hide his defensive shortcomings and Taj Gibson isn’t getting any younger.

The Knicks aren’t getting their hands on Butler anytime soon without relinquishing at least one valuable asset, and as each moment passes it becomes clearer and clearer that he would prefer to be a Los Angeles Clipper. Too bad Tom Thibodeau is in control of his destiny at the moment. If any of the possible scenarios above are offered by the Knicks front office and the Wolves executives see them as sufficient, there will be a shot that Butler will be in orange and blue regardless of his preference.

Don’t count on the Knicks offering those deals up.