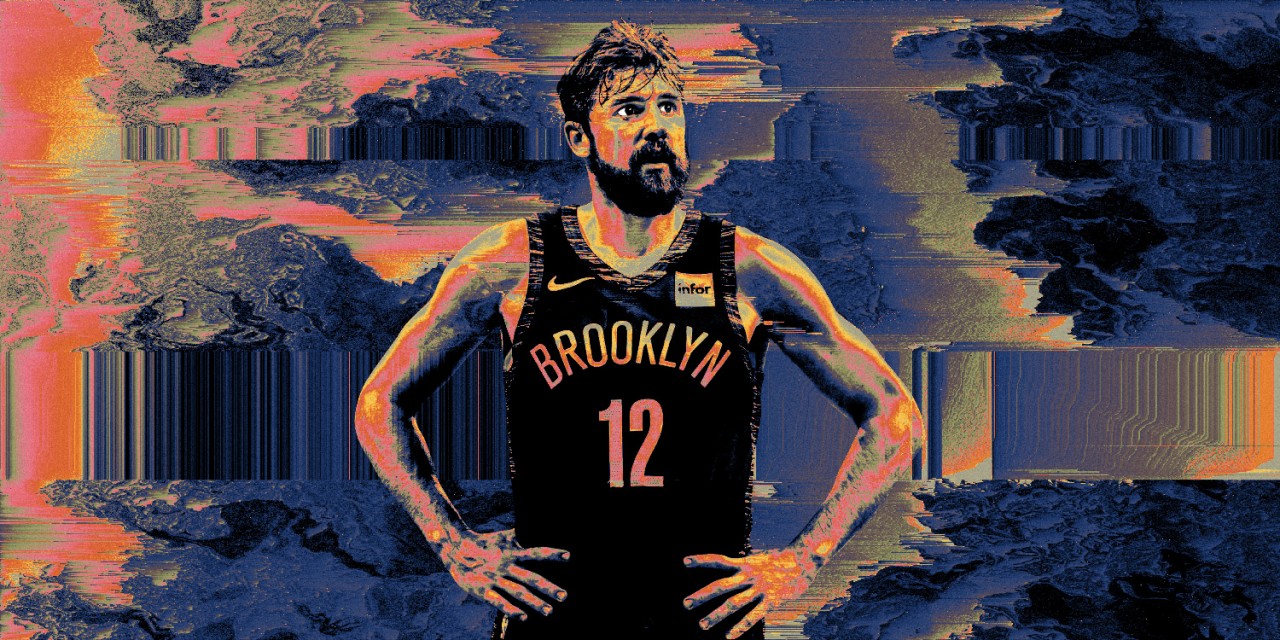 Nets swingman Joe Harris is a free agent this summer, and his out-of-this-world shooting ability could land him at the top of the Knicks’ free agents list.

Stop me if you heard this before: the New York Knicks need to add some shooting this offseason.

When viewing the Knicks’ future, R.J. Barrett and Mitchell Robinson rise to the top as key players for the road ahead. At the moment, neither player is a good shooter; therefore, the Knicks will have to add players who can launch from deep, create balance, and modernize New York’s offense.

This past offseason, the Knicks somewhat understood this, signing Bobby Portis, Reggie Bullock, and Wayne Ellington. Between the initial letdowns of failing to secure Kevin Durant and Kyrie Irving and questionable finances, adding three shooters to help the likes of Robinson, Barrett, and new signing Julius Randle was viewed as a positive to help the offensive balance on the floor.

Ellington was constantly shuffled in and out of both David Fizdale and Mike Miller’s rotations, while Portis couldn’t properly balance his long-range shooting with post up and low post isolations. Reggie Bullock dealt with an injury before signing his contract and didn’t return until the second half of the season. Once returning, he wasn’t the same player before the COVID-19 shutdown.

Now, the Knicks get a second chance to fill a massive need. With a large amount of cap space and a need on the perimeter, the Knicks should target someone who can space the floor and give the Knicks consistency for whoever the next coach will be.

After two nondescript seasons with the Cleveland Cavaliers, Harris was traded and waived before landing with the Nets and Kenny Atkinson (now a head coach candidate for the Knicks). That relationship—and Brooklyn’s gamble on young players—allowed Harris to receive an opportunity and, in turn, gave Harris the room to blossom into the elite shooter over his four-year tenure.

Since arriving in Brooklyn in the 2016–17 season, Harris has averaged 20 minutes a night and shot at least 4.3 threes per game in each of the four seasons—culminating with a blistering 5.1 three-point attempts and 47.4% shooting from three in the 2018–19 campaign. Before the coronavirus pause, Harris was taking 5.9 attempts per game and 41.2% shooting from three. Again, strong numbers from an elite sharpshooter.

Acquiring shooters is an offseason need for New York. However, that’s too broad. Of the two main questions the Knicks have to answer, the biggest is simple: with Barrett and Robinson as your top two players, what level of shooting do the Knicks need to put around two players who are clearly non-shooters?

The Sacramento Kings are a relevant example for the Knicks. De’Aaron Fox was a questionable shooter coming out of Kentucky, but Sacramento flanked him with two high-level shooters in Buddy Hield (Knicks trade candidate?) and Bogdan Bogdanovic (future Knicks free-agent target?), and it opened up that team’s offense.

Joe Harris is an elite shooter. Here is a list, per Basketball-Reference—of players since 2016–17 (Harris’ first year in Brooklyn) who had a:

Harris is one of only 11 players who fit those criteria over the last four years. If you remove Heat forward Duncan Robinson, who has only played one true season, Harris is best among the 11 players with 42.7% shooting from three.

In short, Harris takes the most valuable shot in basketball more than half the time he’s on the floor, and he hits it at the highest rate in the league.

A highlight video is just that—moments of someone or something at their best. However, this video gives you an idea of what Harris can bring to the Knicks.

As evidenced by his 16.9% usage rate, Harris isn’t going to dominate the ball on offense, which works for both R.J. Barrett and whoever lines up at point guard next season. The fit for Harris in New York’s offense potentially works as someone who can space the floor and, more importantly, provide gravity. Having an elite shooter and forcing opposing teams to recognize that opens up the pick-and-roll more, gives Mitchell Robinson a bit more space on his rim runs, and even Julius Randle can benefit.

At 6-foot-6, Harris also allows New York to maintain size on the floor. Harris isn’t a good defender, but he isn’t the worst defender in the league either. Here’s a glance of his defensive numbers over the last two seasons:

His value will come from the offensive side of the ball, but it is important to note that ESPN’s RPM stat does value big men defensively more than wing players. Either way, Harris is someone who can be hidden by the likes of Robinson behind him in the paint and Frank Ntilikina or Barrett assuming the tougher of the two opposing wing players, while he knocks down a ton of threes.

When pursuing shooters, and Joe Harris in particular, there were two questions in acquiring some help around the perimeter. We talked about how talented the shooters have to be, but the second question is almost just as important:

Do the Knicks have the talent to give many minutes to a one-dimensional shooter?

It’s a multi-faceted question that could end with a “maybe?”. The Knicks added two good shooters in Ellington and Bullock and, while both had their own issues, neither truly changed much for the Knicks. If anything, one can point to the other issues on the Knicks (the balance at power forward and center, the fact none of the point guards on the roster can shoot) as reasons why it went largely unnoticed that two players with 40% three-point shooting seasons in their past struggled.

But in adding someone like Harris, you add and subtract. He’s an elite shooter who can help the offense, but he’s not someone who can handle and create offense off the dribble; he’s on the poor side of defending and doesn’t impact the game in really any other facet. Again, Harris is an elite shooter, but—and the Knicks are nowhere near the playoffs—he does fit the profile of the classic regular-season shooter who can be stymied in the playoffs.

The answer, again: Maybe? New York has its hands in many jars at the moment. They could remodel the roster with solid defenders, ball handlers, and guys who can impact the game in different areas and then add Harris’ shooting. Right now, the Knicks have to think like this because of their poor development and lackluster free agent moves. Can the Knicks afford a sizable contract for a 29-year-old shooter?

Joe Harris makes sense for the New York Knicks for a number of reasons. The Knicks need shooting, and as they consider this development over the next two seasons, adding Harris to help ease some of the defensive gameplans off Barrett and Robinson. While he doesn’t fit the age criteria (29, as of the 2020–21 season), one of the best shooters in the league would be perfect for a team still figuring it out in other areas, yet looking to make a considerable jump in the 2020–21 season.

The Knicks have the cap space, the need, and the sizable chunk of minutes to offer and entice several free agents this offseason, and Harris should be high on the free agency list.