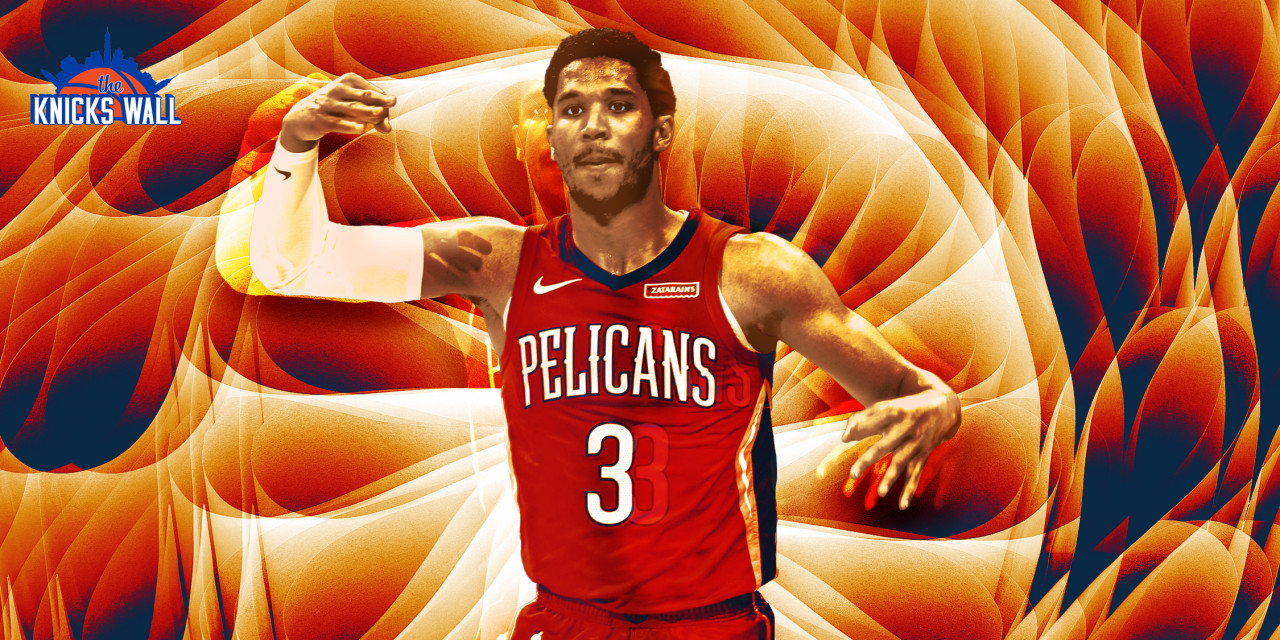 Josh Hart’s collection of skills on both sides of the ball could benefit the Knicks as a free agency fit.

If there’s anything the NBA Finals should tell you, it’s that the New York Knicks need perimeter players. Giannis Antetokounmpo has been Milwaukee’s best player, but Khris Middleton and Jrue Holiday have also been essential in the Milwaukee Bucks’ 3-2 Finals lead. As for Phoenix, Devin Booker has been spectacular, but the likes of Cameron Johnson, Mikal Bridges, and Jae Crowder have all impacted the series at some point.

Today, the Knicks have just one “wing” player under contract for the 2021–22 season: R.J. Barrett. Before you kill me, Immanuel Quickley is more of a guard. Positions are slowly but surely a thing of the past, but to me, a wing player is someone who can float between the shooting guard and small forward spots and defend up a bit. As good as Quickley is, I prefer him more as a guard.

The Knicks will have their pick of the litter on the perimeter this offseason, thanks to having nearly $50 million in cap space and three selections within the top 32 picks of the 2021 NBA Draft.

So the answer to fixing New York’s perimeter player concern could be Virginia’s Trey Murphy III in the draft and Blazers guard Norman Powell in free agency, or Oregon’s Chris Duarte and old friend Tim Hardaway Jr. back. How about moving up for Arkansas’ Moses Moody, stealing Gary Trent Jr. from your rival Toronto Raptors. The possibilities are endless this offseason for New York.

The most interesting name on the table for the Knicks is a Pelican. He’s a former Laker hitting restricted free agency for the first time and looking to cash in, despite some up-and-down performances with his jumper. Of course, I’m talking about Josh Hart. As a restricted free agent, Hart’s market will be tough to gauge. However, the former Villanova swingman would be perfect for Tom Thibodeau and the Knicks.

Wolves coach Tom Thibodeau was asked about Josh Hart: “Terrific. He’s just a good basketball player. He can do everything. Shoot, pass, defend.” Thibs called it “huge” that the Lakers found him late in the draft (No. 30 overall).

What makes Hart a good player for the Knicks is that he’s a good player in the simplest form. While he’s not an elite defender, Hart is a good defender, capable of handling smaller wings and point guards alike. Under Thibodeau, Hart can be capable of stifling pick-and-rolls and time rotations well on the floor and know his defensive system has a proper defender out there.

You also have a player who can impact the game without putting the ball in the basket. Averaging at least 2.0 assists per 36 in all four seasons, Hart had an uptick as a passer, moving to 2.9 assists per 36 and a career-high assist rate of 10.9%. You’ll never hand the ball over to Hart and run the offense, but putting him on the floor gives New York’s creation another element, which could only assist them as they look to improve their offense next season.

The most prolific part of Hart’s profile is his rebounding. Hart has improved as a rebounder in his last season with the Pelicans, but this season saw him elevate his game to another level. Last season, Hart averaged 8.0 rebounds per game and sported a 26.1 defensive rebounding rate, almost unheard of for a guard. Defensive rebounding is a part of the overall defensive packaging for Hart; it gives any team Hart signs with another option for small-ball lineups while also showing you Hart’s basketball I.Q. and spacial and positional awareness on both sides of the ball. It shows a few things in Hart’s game.

Where Hart Can Improve From Here

You’re probably thinking: This guy sounds amazing! He deserves the max! What are the downsides?!

Hart doesn’t fit the bill of a scorer, as his game has thrived despite being below average at putting the ball in the basket. Over his four-year career, Hart has failed to average 15 points per 36 minutes, nor has he eclipsed a True Shooting percentage of 57% once, with anywhere between 54-56% being considered average in a normal season. So the offensive profile, in this current iteration of the Knicks, isn’t what you want.

Though, to Hart’s credit, it’s largely the outside shooting that’s been an issue. Hart has been one of the better guards in the league at the rim—shooting over 64% at the rim in every one of his seasons as a pro. But the outside shooting? It sinks the profile a bit. Ever since Hart shot 39.6% from the outside as a rookie, Hart has struggled with his shooting consistency, registering a career-low 32.6% this past season. As Hart was having a career season in other aspects of his game, his shooting buoyed the overall profile in his walk year.

What makes him an ideal piece for the Knicks? The profile gives New York another advantageous rebounder on the floor, while someone who can properly move the ball and maintain positive ball movement. Defensively, Hart, measured at 6-foot-5, could handle most backcourt matchups, but his size also allows him to play against some smaller wings.

For starters, there’s no need to play him at the 3. Last season, Hart played an estimated 85% of his minutes at small forward. The Pelicans roster was a weird one last year. Between Lonzo Ball and Eric Bledsoe’s dueling banjos in the backcourt, Brandon Ingram making sure to get his buckets, Steven Adams clogging the floor, and Zion Williamson literally scoring like Shaq, the Pelicans had a ton of things going on.

When the top of the roster is a mess, the role players tend to be the ones that shuffle. The Zion-Adams combination didn’t work due to a lack of spacing, while Bledsoe-Lonzo didn’t really gel as neither were consistent shooters, and Ball needed the ball to be more effective. Where does Hart fit in? Off the bench as a utility guy and someone who made sense for New Orleans, just to get one ball-dominant player off the floor.

The New York Fit (and Price), Collin Sexton, And Improving as a shooter

Place Hart on the Knicks, keep him as a shooting guard, and you might have some more solidified results. New York’s offense is a bit more conventional, with Julius Randle running the show. With just Randle, Hart can serve as a cutter and catch-and-shooter player off New York’s offensive hub. Unlike some other options, Hart has a bit more juice off the dribble, thanks to his basketball I.Q, which could help his passing play up.

I’m also oddly intrigued at signing Hart after trading for Collin Sexton, the source of recent swirling trade rumors. Sexton’s rim pressure would do wonders for New York, but he also gives them another offensive pillar, as evidenced by his 24.3 points per game last season for the Cavaliers. For me, the idea of trading for Sexton and adding Hart is using Sexton’s offensive juice to help energize New York’s offense while adding Hart for his secondary skills and further insulating Sexton’s defensive woes with smart defenders around him.

Hart’s shooting could sink the profile a bit, making him more of a sixth man than a starter, but placing him in New York could help fix that as well. Last season, the Knicks saw R.J. Barrett and Julius Randle put together career seasons from the outside, while guys like Derrick Rose came to New York and saw jumps in their shooting numbers. Still just 25 years old, Hart could see another jump in his shooting profile.

Lastly, the price. Hart could cost a pretty penny to get him out of New Orleans as a restricted free agent. The number I’ve been playing with is $54 million over four years. The Pelicans will look to retain fellow restricted free agent Lonzo Ball. At the same time, Ingram moves into year two of his new contract, Williamson quietly makes over $10 million as a third-year player, and Adams’ two-year, $34 million extension kicks in. If Ball gets his near-max wish, the Pelicans will be in prime position to lose Hart.

Josh Hart isn’t going to be everyone’s cup of tea. The lack of offense is a bit of a concern. His shooting could have him teeter on his next deal like a “sometimes 3-and-D” guy. A guy to think about is, well, former Knick Courtney Lee. Lee finished his career as a 38.8% shooter and contributed to several teams. However, he was never a true lead 3-and-D guy; as the defense lagged a bit, he never did much outside of shooting and never took a ton of threes. While the profile isn’t the exact same, there are some concerns he might end up on that starter/reserve borderline.

But there’s a concern about him being a good player. Hart is clearly a perimeter player that we’ve seen on good teams before. He does the little things that coaches want, he can impact the game without scoring and for his age, his basketball I.Q. is his best asset.

The New York Knicks could use another perimeter player, and Josh Hart brings an interesting case for New York. His shooting is a potential issue, but the Knicks have successfully pulled the most out of potential shooters. His defensive versatility, passing, and above-average rebounding for a guard could make for an excellent fit at the shooting guard spot for the Knicks. At 25 years old, he could be a quality player for New York for the foreseeable future.

»READ: Shooting for a playmaking wing: looking at creators in the NBA Draft