Julius Randle and Knicks Welcome Warriors to the Garden 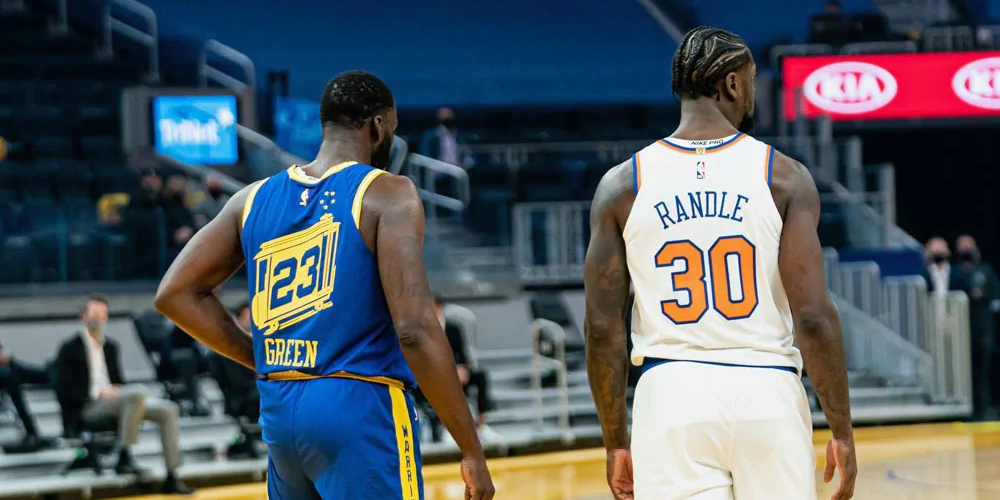 The Knicks host fans and a funky Warriors team, with or without Stephen Curry, on Tuesday with a handful of games left until the All-Star break.

The Golden State Warriors (16-15) will be playing against the New York Knicks (15-16) at Madison Square Garden and, while the Dubs just let two close games fall into the loss column, the ‘Bockers are picking back up from their early-season form.

The first question to ask is how healthy is Stephen Curry? He was a late scratch against his hometown Charlotte Hornets last game as he was “not feeling well” (not COVID-related).

It takes a lot for the Carolina product to not play in that building, his hometown, so let’s assume he was quite unwell. If he’s less than 100%, then that’s obviously a bonus for the Knicks as the two-time MVP is having his regularly incredible season.

With or without Curry, the Warriors have lost two close games against sub-.500 teams with a Draymond Green double technical and Terry Rozier carry game-winner lifting the Hornets over the Warriors:

This was preceded by a triple-double from Nikola Vucevic and a defeat to the Orlando Magic, who played some tough late-game defense.

The San Francisco Chronicle’s Connor Letourneau reported that the team is “optimistic” that centers James Wiseman and Kevon Looney will return against the Knicks.

If they don’t return (or to be honest, even if they do) Julius Randle should be licking his lips at his potential matchups here.

Draymond Green is obviously a defensive juggernaut and former Defensive Player of the Year, but his lack of an offensive game outside of his facilitation could be a free rest for Randle on one end while the Warriors’ switch-heavy defense be just the thing he needs to get going early by bullying much smaller players down low.

Since February 3rd, the game that injured Kevon Looney (Wiseman was out since January 30th), the Warriors have actually kept opponents to the third-best location effective field goal percentage, per Cleaning the Glass, a stat which accounts for the value of the shot taken and have been slightly above average at protecting the rim.

It’ll be interesting to see if they can keep that up against the Knicks with or without their big men.

It won’t be an easy matchup for New York’s wings, however, with Kelly Oubre Jr. picking up from his horrid start of the season, hitting 46 percent of his three-pointers in the month of February in a heavier minute load.

On top of that, Andrew Wiggins has continued his mini-revival in San Francisco and continues to lead all forwards in block percentage (minimum 550 total minutes) while shooting a career-high from behind the arc.

Tom Thibodeau’s rotation should be interesting to keep an eye on. In their last game against the Knicks, Immanuel Quickley and Obi Toppin only played nine minutes each. Whether the team is wanting to make a big push for the playoffs or not, Thibs should at least play Quickley more as he’s actually positive for a rookie.

If the Knicks come away with a win, it’ll be their fifth in six games and bring the team back to .500 for the first time in a while and puts them in the driver’s seat to make the play-in tournament or maybe even skip it altogether and just make the playoffs.

For entertainment purposes, Curry playing is a win-win, either New York’s defense works, and they likely coast to a win or it doesn’t and, well, we all remember his first 54-point outing in the Garden. It wasn’t boring to watch.

»READ: Tank or go for the play-in? Debating which strategy best benefits the Knicks