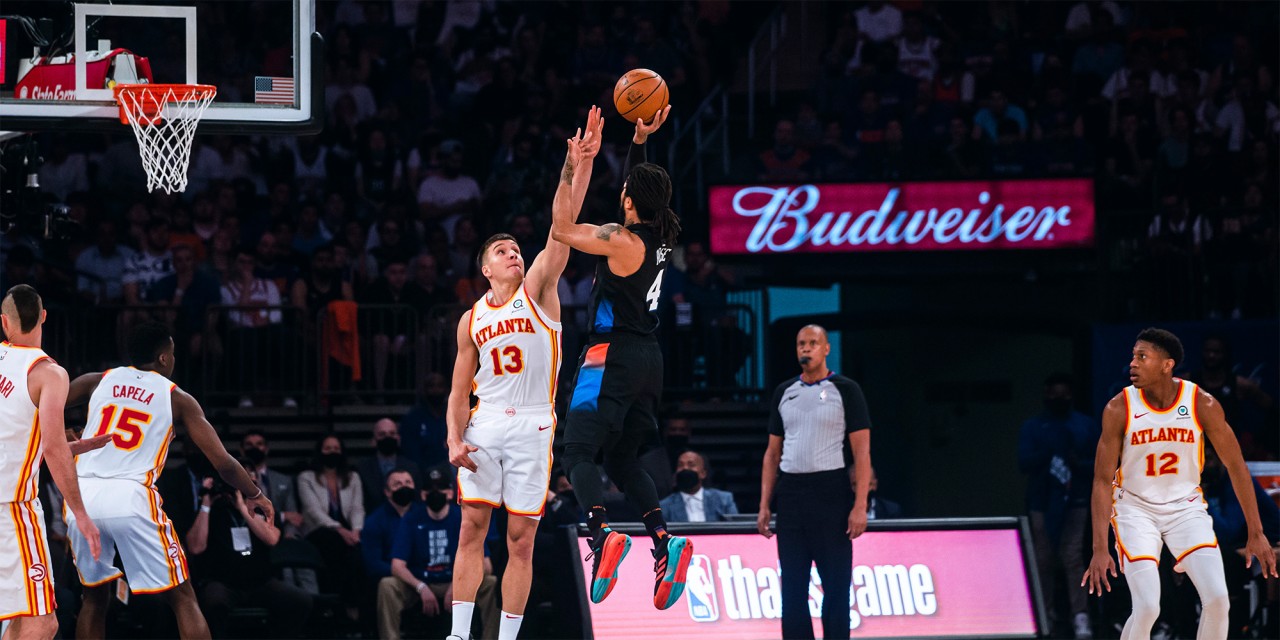 Derrick Rose led the Knicks in points; Julius Randle came alive with 13 second-half points as New York ties the series with a win over Atlanta.


The New York Knicks (1-1) defeated the Atlanta Hawks (1-1) in Game 2 of the first round of the NBA playoffs by a final score of 101-92. For Atlanta, Trae Young finished with 30 points and seven assists, while Bogdan Bogdanovic joined him atop the Hawks scoring leaders with 18 points. For New York, Derrick Rose led the way with 26 points, four rebounds, and four assists, while Julius Randle had 15 points, 12 rebounds, and four assists.

With the victory, the Knicks tied the series at 1-1 as they travel to Atlanta for Game 3.

What a wave of emotions from this one. From “well this series might be over” to “the Knicks could win the rest of the games and move to the second round,” all within 48 electric minutes.

It started with dread, New York failing to find any success on offense. Atlanta’s offense wasn’t too explosive either, but the Knicks made the Hawks look like the best offense in basketball compared to their starting performance. Defensively, I found New York to be fine, energetic, and creating movement and forcing additional passes for Atlanta to work with. Still, for every Atlanta miscue, New York could not convert.

The second quarter gave to the second unit, as the trio Derrick Rose, Immanuel Quickley, and Alec Burks came to the rescue. Rose came in early in the first, a recent change in Thibodeau’s rotation. New York’s offense began to show signs of life, but the defense began to slip. If it weren’t Young pick-and-rolling his way to baskets, Bogdan Bogdanovic would splash the outside shot. Danilo Gallinari, who looks immobile at times on defense, was just spry enough to knock down a few threes.

At this point, New York began to lose the plot. Quickley, effective in Game 1, was a no-show in Game 2, struggling to knock down much of anything from the outside and noticeably poor on the defensive end. There was no chance he was taking the likes of Young on defense as Bogdanovic continued to battle him and shoot over him. Not to be completely negative on the rookie, but it was a rough night.

But the overall spark wasn’t there. Rose was good, but Quickley and Burks struggled, and with the starting unit largely quiet, it mirrored the first game, only, without that pick-me-up the second unit offered.

Heading into the half, the Knicks looked like a mess. The duo of Young and Bogdanovic combined for 34 points on an excellent 13-of-22 shooting. The Knicks, down double digits, began to look at the prospect of going to Atlanta down 0-2 in the face. It was a moment of truth for a team that continued to fight through adversity for the entire season.

Could the Knicks recover?

The third quarter began with a slight change from Thibodeau, leaving Payton on Rose’s bench. However, the Knicks still lacked behind. Down 15 at the half, Atlanta maintained a solid offensive pace, even as they went to the second unit. Kevin Huerter (10 points) was able to keep the Hawks alive. In comparison, Lou Williams (six points), the veteran, was able to recycle the offense, keeping the inexperienced Atlanta players right, even when things weren’t going their way.

But here’s when things got interesting. Hawks head coach Nate McMillan left Young and Bogdanovic on the bench or a bit near the end of the third. He pulled a similar move in Game 1, leaving Young on the bench as the Knicks got it going in the second quarter. The Hawks won Game 1, and Young’s minutes on the bench were was largely ignored. Tonight, the third quarter became a turning point for both teams as McMillan ran the gamut once again.

Only this time, it burned him.

Nate McMillan kept out Bogdanovic and Young for too long. They've only played 27 minutes each. Knicks pounced and lead by 10.

Julius Randle, who was quiet for most of the series, returned to form. It started with a three-ball, waking himself up from his offensive slumber. Then, Randle came alive, scoring 10 points and looking like the guy who won the Most Improved Player of the Year award and earned his first All-Star bid. The former Kentucky product finished with nine points, and the Knicks went on an 18-2 run as Young and Bogdanovic sat, giving New York life heading into the third quarter.

The fourth quarter started with a returning Young and, with that, a quick 9-0 run from Young, including some free-throw-garnering antics that brought back flashbacks to Game 1. As Young hit a pair of free throws to cut New York’s lead to one, the thought was that Young continued to get the whistle and muck up the game.

However, a swift 9-0 run, capped off with a Taj Gibson dunk, gave New York a sizable lead. Reggie Bullock, who finished with 15 points of his own, also capped off the Hawks with some of his signature off-screen threes. Some positive Obi Toppin minutes, a very nice Alec Burks game, and we’re heading to Atlanta with the series tied at one apiece.

What a win by the New York Knicks. Let’s jump into the game notes.

The Knicks travel to Atlanta to face the Hawks in Game 3 of their first-round playoff series on Friday, May 28th. Tip-off is set for 7 p.m. ET.