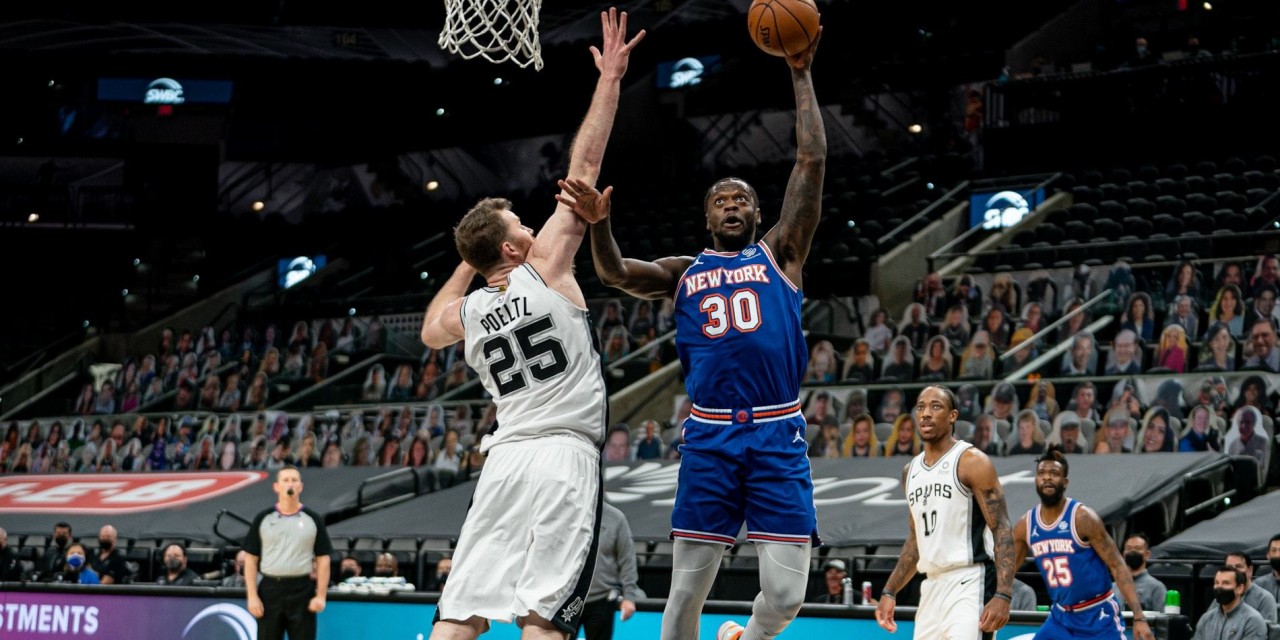 Ahead of his NBA All-Star Game debut tonight in Atlanta, Julius Randle was available to comment on the break, his family, and how well the season is going for the Knicks.

ATLANTA, Ga. — For New York Knicks power forward Julius Randle, this was a special moment, one that signified the hard work and adjustments he made throughout his career. After seven professional seasons, Randle received his first career All-Star selection, taking the court with the likes of LeBron James, Kevin Durant, and the NBA’s best in the 70th edition of the All-Star Game on Sunday.

But unlike previous years, the All-Star Game is vastly different. The once-canceled game was originally set to occur in Indianapolis, Indiana, but the COVID-19 pandemic forced a cancelation and, once revived, the schedule conflicted with the NCAA tournament. As a result, the game will take to Atlanta—the first NBA All-Star Game in Georgia since 2003.

Regardless of the venue, Randle viewed this moment as a positive. After revealing that he cried when receiving the call of his All-Star selection, Randle reflected on the moment of being an All-Star for the first time.

“You know it means a lot for sure, as far as an accomplishment in my career,” Randle said during Sunday’s All-Star availability Zoom call. “Being able to get this done, being able to work as a team… You know people who helped you get this done, so it means a lot. Really excited about being here and sharing this time with my family… I just appreciate, just for my seven years so far, the journey and the process, year after year, the grind on a day-to-day basis, after all the hard work and sacrifice and commitment throughout that process.”

Randle, 26, is averaging 23.2 points, 11.1 rebounds, and 5.5 assists for the upstart Knicks. After winning just 21 games last season, the Knicks currently sport a record 19-18 through the first half of the season and would be the fifth seed in the Eastern Conference playoffs if the season ended today. Randle’s all-around skill set has allowed him to impact the game and lead Tom Thibodeau’s team to exceed expectations in what many viewed as a rebuilding season.

As a result, Randle will be one of two representatives for the Knicks on Sunday. Randle will work double duty, playing the All-Star Game and the Skills Competition. Between that and fellow Knicks power forward Obi Toppin’s inclusion in the Slam Dunk Contest, Randle could find himself in three events in today’s event. While he wouldn’t commit to his appearance in Toppin’s slam dunk performance, he did predict a victory for his teammate.

Both Toppin and Randle will be key in New York’s All-Star success on Sunday, but they’ll also be crucial to the team’s success in the second half of the season. New York is looking for its first playoff appearance since the 2012–13 season when the Knicks won 54 games and earned the second seed in the Eastern Conference.

After quickly dismissing the idea of both he and the Knicks being “disrespected” in the league, Randle revealed that the team viewed the last five games of the first half of the season as “critical” in preserving the team’s good vibes before heading into the break and ultimately, the second half of the 2020–21 season.

Coming to New York in the 2019 offseason, Randle came to win and after a losing season, he wanted to “work harder than ever” to get the team on the right track. With the team’s early regular-season success and an eye on sustaining it in the second half, Randle comes into the All-Star Game ready to not only enjoy the moment but soak it all in with his son, Kyden.

“I don’t know if he understands it fully, but he definitely has a good idea of everything that’s going on,” Randle remarked when asked about Kyden’s time down in Atlanta. “But he’s enjoying it. He definitely knows it’s something that’s not normal. You know, so that’s cool. He’s loving it, you know, walking around saying he’s an All-Star kid, so he’s enjoying it.”

The 70th edition of the NBA All-Star Game is scheduled for Sunday, March 7th. Tip-off is at 8 p.m. ET.