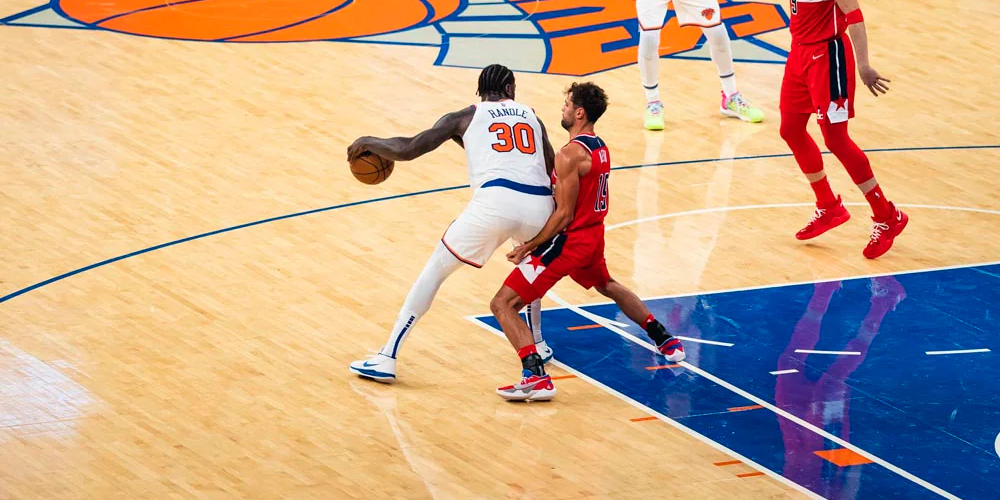 The New York Knicks (4-0) defeated the Washington Wizards (0-4) in exciting fashion on Friday night as the ‘Bockers looked all but defeated headed into the fourth quarter. If we know anything about this Knicks squad, late-game heroics are in their DNA, and it showed with a step-back dagger from Julius Randle with no time left in regulation.

JULIUS RANDLE IS A SUPERSTAR pic.twitter.com/oghBHC2puD

The exhilarating comeback followed the much-anticipated return of Knicks center Mitchell Robinson. The “Blockness Monster”s availability had been teased all week by head coach Tom Thibodeau. He ended up too gassed to finish the fourth quarter, but the fourth-year big man had an efficient nine boards and six points. With Taj Gibson in foul trouble, the Knicks were forced to play small ball with the rarely seen duo of Randle and second-year forward Obi Toppin putting on a show on both ends of the court to seal the deal.

Washington looked unstoppable from behind the arc, finishing 14-of-35 from three-point range on the night. However, the Knicks finally found their stroke in the second half of the game, ending up shooting 36% from three after it seemed there was a lid on the basket for every Knicks offensive possession, evening up with D.C.

Randle, who sent Washington packing and winless during preseason play, had 21 points and 10 rebounds during 38 minutes on the court tonight. He barely rested but played well alongside Toppin toward the end of the fourth quarter, which is a lineup Thibodeau has been reluctant to put out in the past due to possible defensive lapses. Toppin had a monstrous block in the last moments of play, which shut any skepticism over the small-ball defense.

RJ Barrett was solid once again, finishing with 18 points and six rebounds in 34 minutes. Barrett joined the block party in the final period and obliterated an attempt from Deni Avdija to keep the Wizards within a score of the Knicks.

Derrick Rose came off the bench and did what D-Rose has done best for the Knicks during his most recent stint: keeping them in the game down the stretch with some sly layups off the glass and now-consistently reliable three-point shooting. Rose finished with 28 points in 29 minutes, showing that the Knicks’ bench unit has quite the competent floor general running the show.

One of the more admirable efforts tonight came from rookie guard Quentin Grimes. He only poured in six points in 21 minutes of action, but his defensive chops showed themself as he helped to lock down the Wizards’ hottest guard on the court, Raul Neto. Neto looked like he would run away with a high-scoring effort in a Washington win before Grimes stepped into the ring. The neophyte also hit a clutch triple in the final two minutes of the game, showcasing his prowess from deep.

Neto was one of several guards for Washington that tried to put a stop to the Knicks’ momentum. Spencer Dinwiddie and Aaron Holiday combined for 31 points, but were quiet in the fourth quarter as New York finally woke up and played the Thibodeau defense that has become a cornerstone to their success.

The next time the Knicks suit up will be against Jayson Tatum and company next Wednesday in a battle of the seminal franchises during the NBA’s opening night of its 75th regular season. We now look ahead to see this refreshed and improved Knicks squad takes on another strong Eastern Conference contender.

»READ: Can the Knicks keep up with a deeper Celtics team this season?