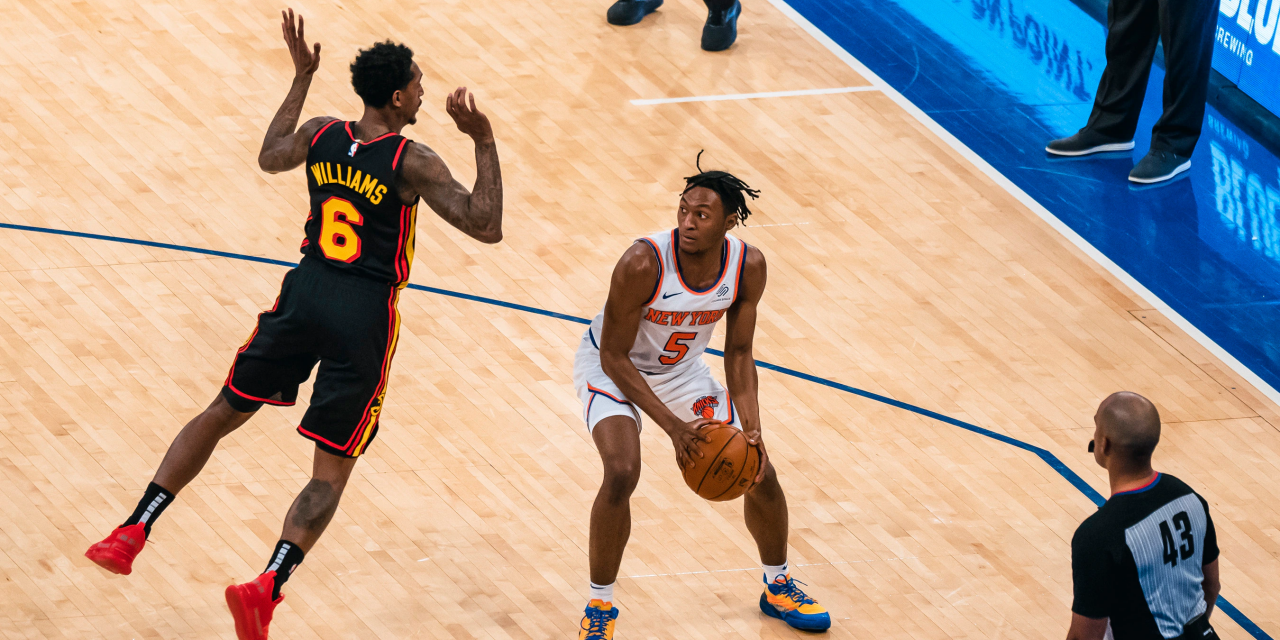 Julius Randle’s fingerprints were all over Wednesday’s overtime win over the Hawks as the Knicks now possess fourth place in the Eastern Conference.

“New York, we here!” was Julius Randle’s message to the lucky few who were able to attend tonight’s game.

The New York Knicks (33-27) and Atlanta Hawks (32-27) fought for sole possession of fourth place in the Eastern Conference, and the anticipated matchup lived up to the hype.

Trae Young did whatever he damn pleased in the first quarter. Young, rocking goggles for a second straight game, racked up 16 points and dished out five assists to lead the Hawks to a 39-point quarter—the highest scoring total the Knicks had given up in a quarter thus far this season. The Knicks took it on the chin and responded with a flurry of their own. Randle caught fire (20 points, 6-of-9 shooting), Young cooled off, and the half ended at an explosive 69-67 Hawks lead.

There was no encore of third-quarter magic. Nerlens Noel left with an injury, which only made Clint Capela more of a menace. The defense overall did not pick up as it did last night, and that is with Young regressing considerably before rolling his ankle near the end of the quarter.

The Knicks faced a 97-90 deficit entering the final quarter and appeared like they had shifted the momentum completely with a 10-0 to take a 111-109 lead. The Hawks fought back. Bogdan Bogdanovic had a huge quarter and tied the game up with a corner three to make it 122-122 and send the game to overtime.

As was the case Sunday, the Knicks had a surprising air of confidence to them. Randle reached the 40-point mark for the second time this season against the Hawks. Noel had a big block, Bullock and Barrett had big shots, and Quickley hit the dagger. New York 137, Atlanta 127.

The Knicks are not peaking, they are evolving. They took the Hawks’ best punch and counter-punch and responded to both. Their relentlessness eventually wore out the Hawks and are now four wins away from their first winning season since 2012–13.

Why Is This So Hard?

Derrick Rose needs to see closer to 30 minutes a game. He is the best blend of scoring a facilitating out of the point guard group and playing great. Rose hit his first six shots of the night, posing a threat at all three levels, and had a couple of nice dishes as well. When he was in the Knicks played considerably better.

Rose did, however, foul out, finishing +15 for the game and scoring 20 points on 8-of-12 shooting to go along with four rebounds and three assists. It’s evident he is the best option at point guard, and it appears Tom Thibodeau is finally acknowledging it.

The defense never looked good tonight. Capela dominated down low in every fashion. Young was on pace for a huge scoring night before he went down with an ankle injury. The Hawks put up 39 points in the first quarter, the most the Knicks have surrendered in a single quarter all season, and always seemed to answer every Knicks run.

The Hawks ran out of steam, but 127 points are abnormal for one of the best defenses in the league. To still get a win in spite of this is something to be proud of.

Quickley made up for a recent cool stretch during April with clutch playmaking and three-point range down the stretch.

The Knicks will be back at the Garden for a matinee matchup with the Raptors on Saturday.