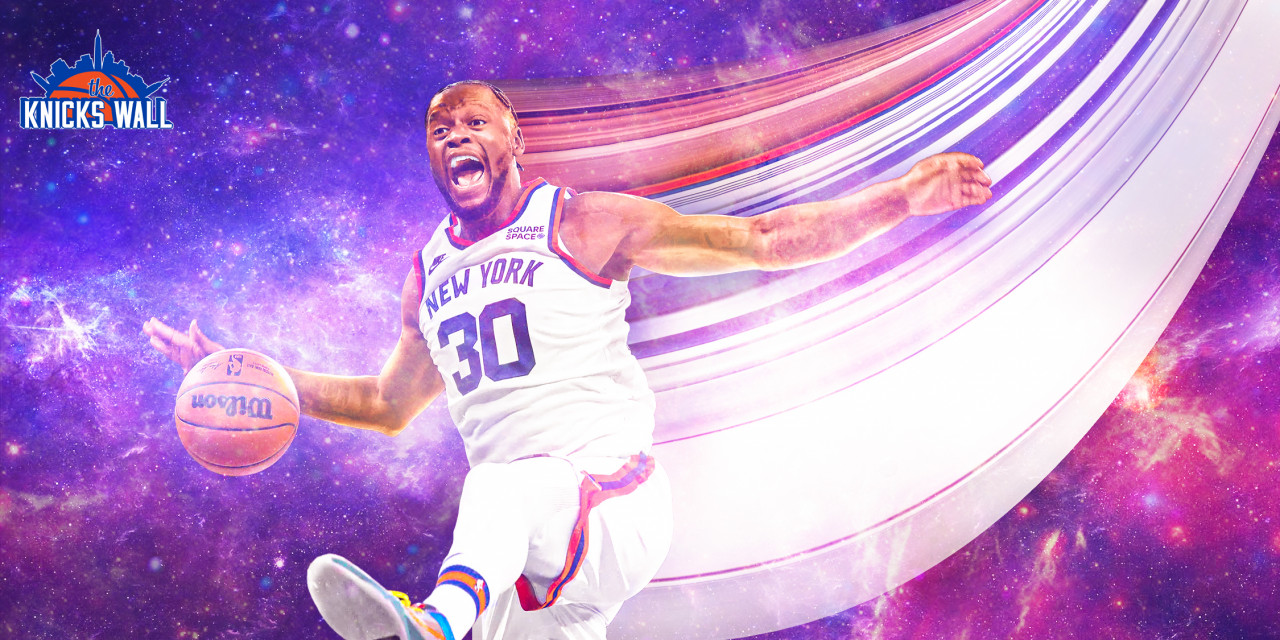 Fresh off a career year where he was named to the All-NBA Second Team, Julius Randle is proving those wrong who said he’d regress this season.

Coming into this new season, Julius Randle has the world in his hands. The ink is fresh on his four-year, $117 million extension, he’s got a shiny Most Improved Player award sitting on a shelf at home, and he just welcomed his second son into the world. All he has to do is prove that last season wasn’t a fluke.

The talk of regression came quickly after last season ended, as the seven-year NBA veteran had never put up numbers like this in his life. Career highs of over 24 points, 10 rebounds, and six assists per game seemed highly unsustainable, and the big man was surely due for a reality check the following season. Media outlets lauded the Knick on striking his contract extension while he was hot, securing a nice payday before teams built gameplays around Randle and he reverted to the player fans met in the prior season.

Three games into the new campaign, Randle has met—and sometimes exceeded—the bar that Knick fans now have for him. He’s averaged 28.7 points, 11.3 rebounds, and 6.3 assists thus far, all on par with or above the numbers he set last year. He was instrumental in the Knicks’ opening night double-overtime win against the Celtics, scoring 13 points to go along with seven assists and three blocks in the second half and both overtimes.

Randle has the Celtics defense in a frying pan pic.twitter.com/1eS0FxGkdj

Knowing that teams would plan their defenses around Randle this season, the Knicks were shrewd in their offseason acquisitions. They did a great job of adding shooters and playmakers that defenses will need to keep an eye on in addition to Randle. The new starting backcourt of Kemba Walker and Evan Fournier has averaged 19.8 and 14.4 points per game in their careers, respectively.

This is a stark contrast to the starting backcourt of yesteryear that featured Elfrid Payton and Reggie Bullock. Payton averaged 10.1 points per game last season, and Bullock averaged 10.9. In theory, then, the Knicks added over 13 points per game into their starting lineup from the backcourt alone. This takes a lot of the workload off Randle, forcing defenses to pay more attention to the Knicks’ guards than they needed to last season.

More importantly, Walker and Fournier are far more efficient three-point shooters than the former two guards. They’ve each shot over 36% from there in their careers. Payton shot 28.9% on three-pointers last season, putting him well below the NBA average of 36.7%. Whereas last season defenses would know they are able to leave Payton open on the perimeter and maybe double Randle, they now need to keep a defender on a dangerous Walker, too.

Bullock is a solid three-point shooter, hitting them at a 39.2% clip in his career. He works best as a spot-up shooter, though, and doesn’t offer much else with the ball in his possession. Fournier, on the other hand, is a solid playmaker able to drive to the rim. Last season alone, he took about 30% of his shots from within 10 feet of the basket. While last season’s defenses would find Bullock predictable, Fournier can perform a number of tricks to get to the basket. This would force defenders to switch to Fournier on his way to the basket, leaving Randle and others open for easy shot attempts.

Aside from the new backcourt, Randle should enjoy some extra rest this season with the added depth the Knicks have. After leading the league in minutes played per game at 37.6 last season, coach Tom Thibodeau will need to bring that number down this season to keep Randle fresh for a whole 82-game season.

To do so, the Knicks reinvested in solid role players like Alec Burks and Nerlens Noel with new multi-year contracts, both of whom will play valuable minutes this season. Derrick Rose is a player who, like Walker, can be counted on as a three-point shooter and is capable of moving with the ball on the floor. He’s already generated some buzz as a Sixth Man of the Year candidate after getting some votes last season.

Mostly, Randle will be able to rest thanks to the strides taken by second-year player Obi Toppin. Toppin, who plays the power forward position behind Randle on the roster, was doubted on the floor early in his rookie season. An athletic wunderkind, he seemed lost with the balls in his hands when he would get the chance, and often barreled toward the rim hoping for the best. Toppin began to get the hang of it in the second half of the season, shooting 53.5% from the field from April onward and being responsible for various crowd-inducing dunks.

Toppin kept it up, being named to the All-Summer League First Team after averaging 21 points and over eight rebounds over six games. In the three games played thus far this season, he’s continued to prove his keep. He’s scored 9.7 points and pulled down three rebounds per contest while shooting 49.8% from the field. Toppin’s minutes so far surpass those from last season, netting over 10 more minutes per game at 21.3. These extra minutes are time that Randle can spend on the bench resting, ready to unleash his best self at the end of close contests.

Should the majority of the Knicks stay healthy this season, the ‘Bockers brass has done everything in their power to give Randle the tools to build off his All-NBA season last year. With an upgraded supporting cast, the pressure should fall solely off his shoulders and onto several other members of the team, as well. With a refined bench unit, the Knicks should be able to afford a little more time without him on the court, always allowing his best, most-conditioned self to step onto the floor in the fourth quarter.

This is what may very well make or break the Knicks this year, as they need Randle’s regular-season triumphs to translate to postseason success. Either way, he’ll have this year and four more after that to prove that there’s no regression happening in New York.

»READ: Balancing on the contention tightrope without jeopardizing future competitiveness