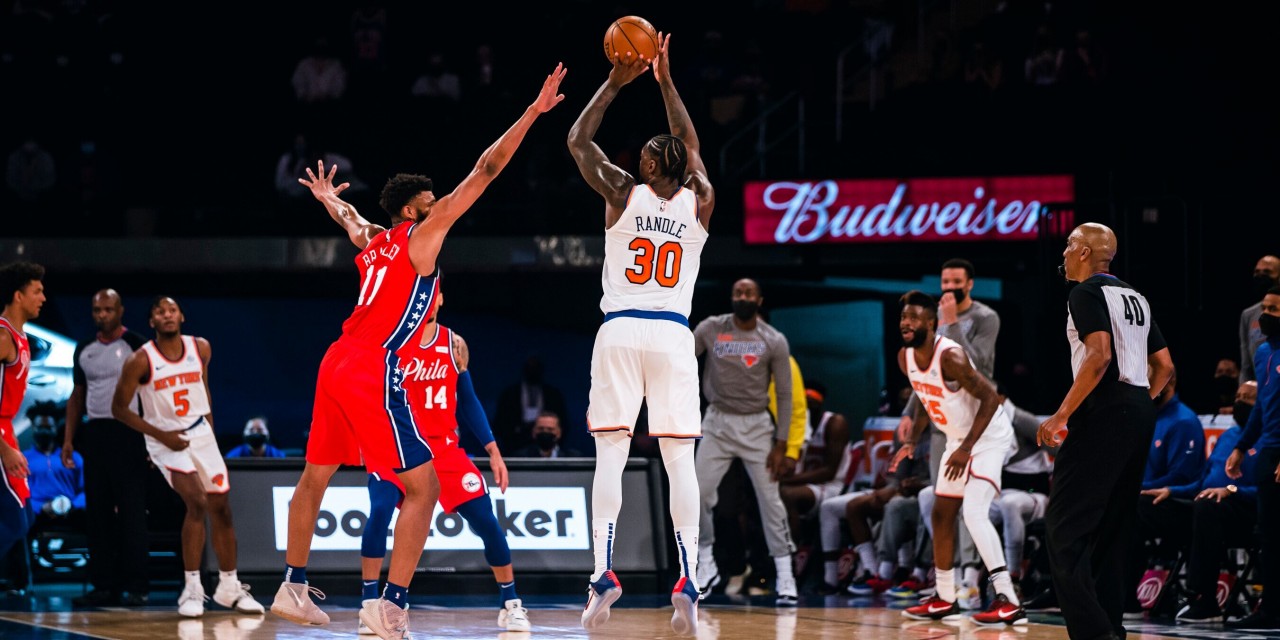 Julius Randle sent the Knicks to overtime against Ben Simmons and the Knicks on Sunday night but fell late in the extended period.

For the second time in six days, the New York Knicks (21-22) and Philadelphia 76ers (30-13) found themselves in a low-scoring slugfest. The Atlantic Division foes went neck-and-neck in a contest with enough intensity and suspense to rival March Madness games. Like last time, the Knicks fell to the Eastern Conference heavyweights, this time by a score of 101-100 (OT).

Neither team could get much offense going in the halfcourt to start. The Sixers used fast break opportunities to jump out to a 13-point advantage. New York struggled to match up when Philly pushed the pace, which resulted in a bunch of chances for easy buckets. The Sixers—particularly Furkan Korkmaz, who recorded a trio of triples in the opening period—seized them.

Meanwhile, the Knicks mustered up a season-low 15 first-quarter points, including only four points through the opening seven minutes. They couldn’t manage to crack the code of the Sixers’  defense and had to settle for difficult shots. Badly misplaced passes that sailed out of bounds were another culprit for holding the Knicks’ offense hostage.

New York trailed for the remainder of the first half but kept it close thanks to their bench unit. Ever since Derrick Rose has been sidelined due to health and safety protocols, the Knicks have stayed in close games in spite of rather than because of their bench. The reserves didn’t dig the Knicks out of the hole, but they didn’t let Philly make it deeper either. The offense was still rather bad but through frequent ball movement, they converted enough shots to keep pace with the Sixers.

When New York’s starters got back in, they cut the deficit to one point when the first-half buzzer sounded. The ‘Bockers harvested takeaways and used them to feast on offense. Just as New York wrapped up a nearly two-minute-long scoring drought, they held the Sixers scoreless for the final three and a half minutes of the half while tacking on 13 points.

Neither team could pull away in the third quarter, or even push the lead to five points.  On defense, both teams swarmed to the ball handler and clogged passing lanes. Buckets from R.J. Barrett and Shake Milton kept each offense going, though they each barely cracked 20 points in the third quarter. Heading into the final frame, the score was knotted at 64.

Julius Randle showed his super-human tendencies by playing all but two minutes and 30 seconds of the second half. He and Alec Burks each scored six points in the beginning of the fourth quarter to keep the Knicks in striking distance. The Knicks used aptly timed double teams to generate steals, many of which came at the free-throw line as players drove into the lane.

With 11.7 seconds remaining and down by three, Randle caught the inbounds pass, was hounded by Tobias Harris, side-stepped to his right, and launched a prayer. It was answered.

A failed heave at the buzzer sent the Knicks to their first overtime period of the season.

New York kicked off the extra period with a three from Burks. Danny Green answered on the ensuing possession. And then Burks found room in the lane to hit a layup. And then Green sunk a triple despite Barrett being as far up in his grill as possible.

The Sixers lost their lead off of a Barrett breakaway layup. The teams exchanged three-pointers and the Sixers took the lead off of two free throws from Harris. With no timeouts and five seconds left, Randle charged up the court and fired an elbow show that rimmed out.

Randle was the game’s leading scorer with 24 points to go along with seven rebounds and five steals. Barrett scored 19 points and collected eight rebounds and dished out four assists. Burks scored 20 points off the bench and added six rebounds, four assists, and three steals. Noel recorded his first double-double of the season, notching a season-high 13 points and 10 rebounds.

Tonight was a prime example of how important Barrett is to this team. Randle has proven to be a hero this season, bearing the burden of the Knicks on his back—namely on offense—on a nightly basis. But he needs a reliable sidekick to aid him. Barrett stepped up to the task tonight, scoring 19 points on 9-of-17 shooting.

RJ BARRETT ARE YOU KIDDING ME pic.twitter.com/tdXt7WDQft

It didn’t matter. Barrett converted seven of his nine shots close to the cup. He bullied his way to the rim like a fullback trying to score a touchdown from a yard out. While Randle struggled to hit shots for most of the game, Barrett kept the Knicks going with timely buckets. Randle (and Burks) took over the game when it came down to the wire, but they had Barrett to thank for keeping the game within reach.

Despite Barrett’s strong play on both sides of the ball, Tom Thibodeau couldn’t shake his bad habit of sitting him for long stretches of the fourth quarter. He didn’t check in until there were fewer than five minutes remaining. Luckily, Barrett played the rest of the way. He made a huge play by finding an open Burks in the corner to start overtime and put the Knicks back on top with a controlled, patient layup.

BURKS TO RJ FOR THE LEAD pic.twitter.com/34dt0rwgp8

At long last, Mitchell Robinson’s right hand has healed well enough for him to return to action after a 15-game absence. He came off the bench and played 17 minutes, finishing finished with six rebounds and four points.

🚨 MITCH IS OFFICIALLY BACK 🚨 pic.twitter.com/xD1nsxTXIZ

Unfortunately, Robinson couldn’t catch a break. He came up hobbling in the fourth quarter after fighting for a loose ball, exited the game, and didn’t return.

Robinson’s brief return was just one part of the Knicks getting back to gull strength, as Rose and Elfrid Payton still remain out. Hopefully, Robinson doesn’t find himself back on the mend, as the Knicks could really use him as their schedule gets tougher.

The Knicks will close out this homestead with two games against the Washington Wizards, the first of which will be at 7:30 p.m. ET on Tuesday.