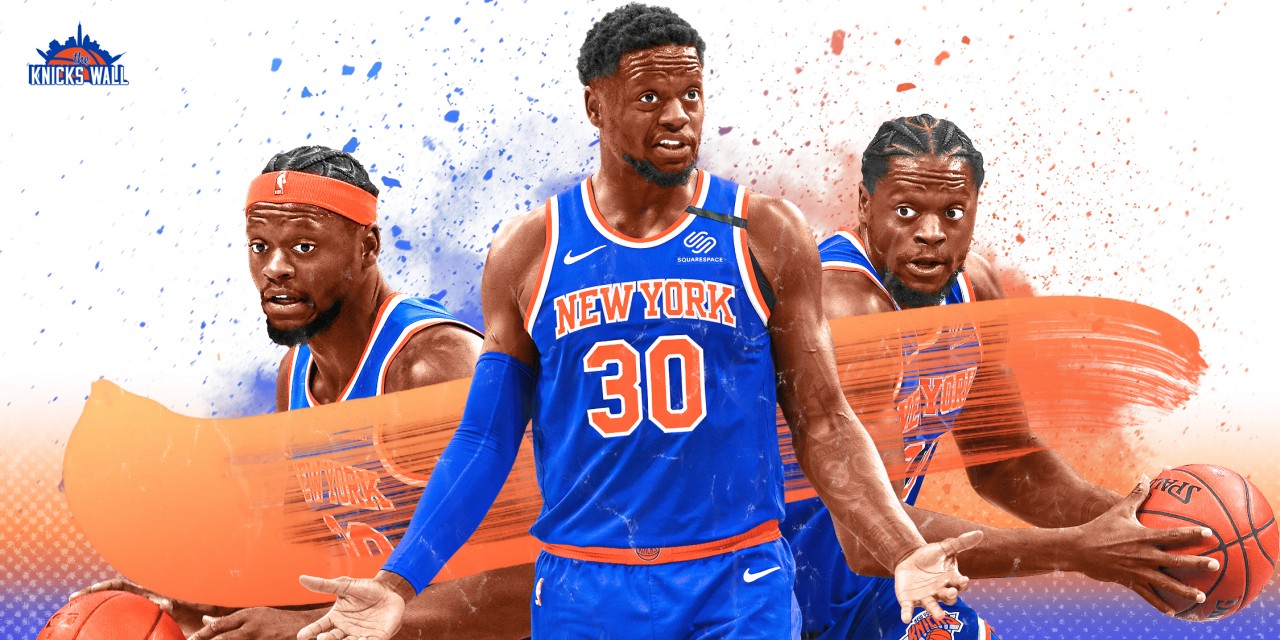 Knicks power forward Julius Randle has been astonishing to watch this season due to his playmaking chops and assist totals.

After eight games in the 2020–21 NBA season, it feels like a lifetime ago that Julius Randle was mocked and ridiculed for spinning into traffic and turning the ball over en route to another New York Knicks blowout.

Now, Randle is a triple-double threat night-in and night-out. He is the focal point of an above-.500 team’s offense. He is leading the NBA in minutes per game. He is in the best shape of his career. He contributes positively to a top-10 defense in the NBA. He is trying on defense!

With the caveat that the season is only eight games young, head coach Tom Thibodeau deserves all the credit in the world for coming into 4 Penn Plaza and changing the culture and league-wide perception of the Knicks. Perhaps the most important driver of these changes has been Thibodeau’s ability to maximize Randle as a player. Following Randle’s 30-point explosion against the Utah Jazz on Wednesday night, Thibodeau had a telling line about the 6’8” lefty: “He’s our engine.”

Other NBA coaches have tried and failed to bring this type of player out of Randle. Alvin Gentry came the closest with the New Orleans Pelicans in the 2018–19 season when Randle averaged 21.4 points and 8.7 rebounds per game. David Fizdale’s attempts to unleash Randle as LeBron 2.0 were an abject failure, leading to the worst offense in the NBA while Fizdale was at the helm of the Knicks last year.

Randle under Thibodeau has been the embodiment of working both smarter and harder. He is averaging the most minutes per game of his career by over six. His best assists per game season was 2016–17 when he averaged 3.6. He now averages 7.4. Randle is letting the game come to him, and his revolutionary changes in passing and defense have propelled the Knicks to the franchise’s best start since 2013.

Pick any yearly passing metric to judge Randle by, and you will find that this is far and away the most productive he has been as a playmaker. He is beating his career-high in assists per game by 3.8. His assist/turnover ratio is on par with the best years of his career. Assist ratio and assist percentage have both spiked. His number of passes per game is up. The easiest way to show how much more willing a passer Randle has been is that his usage rate is consistent with last year, but he is getting 4.3 more assists per game.

It is not necessarily the way he is being used that has changed. Instead, it is the result of those possessions helping Randle’s stats and the Knicks winning. He is isolating at a similar frequency as last year, but doing so far more effectively. This can likely be explained by his willingness to pass out of the isolation. He is generating 0.97 points per isolation this season, compared to 0.76 points per isolation possession last season. That is the difference from being in the 52nd percentile of isolation players rather than the 26th percentile last season. Randle is ninth in points per isolation among players who have more than three isolation possessions per game. He is being smarter about when to attack for a shot, and to give up the ball.

This newfound competence has led to the occasional double team from opponents. Last year, the thought of Randle with one defender, spinning into traffic before the ball flew off his knee was too much to handle. Now, he is combatting aggressive defense schemes with patience and savvy.

One beneficiary of this is R.J. Barrett. Last year, Barrett could be seen standing in the corner, wide open, while Randle attracted the attention of multiple opposing defenders. Barrett clearly did not like standing around doing nothing on the perimeter, and he is now finding more ways to get involved:

Randle is not one to shy away from putting up counting stats. If someone is open for a cut and Randle can nab an easy assist, he will hit them. Barrett has realized this and is capitalizing accordingly. This is evidenced by the number of passes Randle threw Barrett per game last year, 5.8 on average, compared to this year, up to 10.4. The former Kentucky Wildcat was never unable to make multiple defenders react to him, this is just the first year that he is using this as an opportunity to allow teammates to flourish:

Randle is driving with more poise and keeping his head up. Rather than spinning into traffic like a bull in a china shop, he is taking a more measured approach, and keeping control. For someone with a 6-foot-8, 250-pound frame, I can imagine it is rather easy to let one’s momentum fling your body in any direction when you are moving at breakneck speeds.

The transition game has unlocked a lot of good decision-making in Randle. He can receive an outlet pass, and control the speed of the game, rather than racing down the court out of control. Randle’s willingness to find his in-between speeds with the ball in his hands this year has been key:

There is still room to improve on this for Randle. The next big step for him on offense will be limiting turnovers. His two highest assist games were accompanied by scary turnover amounts, 11 assists and nine turnovers against Cleveland and nine assists with seven turnovers against Atlanta.

The bad pass turnovers come with the territory when a big man takes a larger role in orchestrating the offense. These will come down with time. He needs to limit his turnovers when attacking downhill. Whether it’s getting stripped, traveling, or getting called for charges when Randle gets a full head of steam it is almost as if his body is moving too fast for his handle to keep up with.

Patience has been key for Randle this year, but he has taken on such a significant role in the offense that at times he can resort to old habits. He had three offensive fouls in the season opener against Indiana. He had three offensive fouls against Cleveland. If Thibs continues to play him more than 40 minutes per game on a routine basis, limiting his offense fouls will be important for Randle to simply stay on the floor, let alone be the driving force of the Knicks offense.

Fortunately, Randle’s fouls have not kept him off the floor so far this season, even though he is averaging 3.8 personal fouls per game. Foul trouble has not prevented Randle from kicking his defensive effort into a gear that most would have thought impossible after last season. Thibodeau can be credited for a lot of things, but one of the most important is that he has instilled a mentality in each Knicks player that they belong on the floor and can compete with anybody in the league. Randle is hounding his matchup when on the ball, rotating with purpose away off the ball, closing out effectively, and not overplaying at the point of attack (an issue that plagued him last year when he did not feel compelled to try on defense).

This unforeseen defensive effort is highlighted by the fact that the Knicks are posting a 104.0 Defensive Rating with Randle on the floor, compared to last year when teams were scoring 111.6 points per 100 possessions when Randle was on the floor. This has helped elevate the Knicks from 23rd in defense last year to a top-10 defense this year. The box score will not show this; he is not lighting up stat sheets with steals and blocks, but his activity flusters opposing offenses.

The effectiveness of the Knicks’ defense is still somewhat mysterious, as they are allowing far too many threes and shots at the rim, but the starting unit as a whole can be praised more than any one particular player. Still, it is undeniable that Randle is giving it his all on both ends of the floor, making plays that you would not have expected based on his effort last season:

When the New York Knicks play basketball, overreactions abound. Takes that the Knicks won the Porzingis trade because creating cap space allowed for the signing of Randle are flying about. The term “All-Star” is being used when discussing Randle. These takes may age well, or they might not. The season is still young.

Those who have followed the Knicks over the last five or so years have been burned too many times to count, and the Knicks have overcome a suspicious amount of drastic flaws (the defense’s shot allowance, Randle’s turnovers, Barrett’s shooting woes, a variety of injuries) to win five out of their first eight games. Though the season is only 11.1% over, one cannot help but be encouraged by the start of the season. If Randle’s improvements are sustainable, and all signs indicate that they should be, the NBA could be bracing itself for a new era of Knicks basketball.